Welcome to Iron Dog’s spaceship and prepare for a panoramic visit of the Solar System in the latest slot mission called Astro Newts Megaways. This cartoonish, space-themed video slot features the famous Megaways engine that offers more than 230,000 ways to win. On this journey, you’ll benefit from the various in-game features that include the cascading reels mechanic, randomly triggered wild symbols. On top of that, the free spins bonus game will give you a chance to reach out the maximum win capped at 20,000x your bet. Sounds exciting? Let’s look at the overall gameplay in our detailed Astro Newts Megaways slot review.

Ready for a close encounter with the alien newts? Iron Dog blasts off their space-themed title called Astro Newts Megaways, a playful and cartoonish slot game played on 6 reels powered by the Megaways mechanic. It’s not the first time Iron Dog Studio chooses the sci-fi, cartoon-like identity for their titles.

In terms of the template, you’ll find this slot quite similar to Rick and Morty Megaways, possessing the same visual attitude and identity. The Astro Newts Megaways slot has the power to deliver impressive wins across the galaxy, where reels tumble, and wilds expand and land randomly on the grid. Moreover, you can play the free spins game across six planet modifiers that add up to the reel action and excitement.

The Astro Newts Megaways slot is a space-themed title by Iron Dog Studios. The overall theme of the slot game is inspired by the cartoonish, sci-fi element found in many adult animated series. It uses the Megaways game engine, which means that the number of lines changes with each spin.

The more symbols are displayed on the reel, the more chances you have to create a winner. Winning combinations are formed by landing at least three matching symbols on adjoining reels, starting from reel 1. 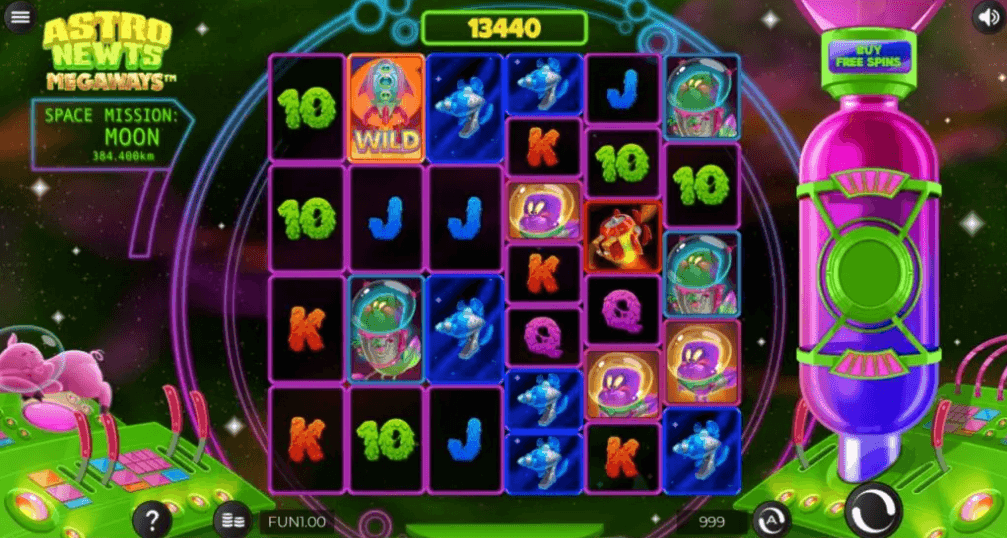 Before joining this space adventure, you have to set your bets in the range between £0.10 and £50 per spin. You can click on the Coin icon to adjust your preferences and choose the bet you feel comfortable playing with.

You can look forward to gameplay enriched with many bonus games and extras that lead to a maximum win of 20,000x your total stake. The biggest potential for you to get closer to a big win is when you land a Uranus modifier in the free spins bonus game, which we’ll cover in details below.

For Astro Newts Megaways, the developer has chosen the playful, sci-fi theme with a bit of 90s vibe to the neon green and purple colours. Every reel can have up to 7 symbols in height, offering up to 117,649 ways to win during the base game. This number is doubled in the final stage of the free spins round, where you activate the win-both-ways mechanism.

As you click the slot game, you’ll feel like you’re part of the retro spacecraft crew. That impression is accompanied by 50s retro sounds that go well with the animations. Overall, the whole theme is quality designed and fits perfectly with the alien genre, at least in the cosmic cartoon series.

On the paytable, we have the lower value A-10 royals that look like they’re made of slime. The asteroids, laser guns, jet packs and two newt astronauts are premium symbols. Their values go all the way up to 50x your bet for six of a kind. The purple Astro newt can form winning combinations with two symbols on the grid, as the most rewarding symbol from the collection.

The space shuttle is the wild symbol that shows up anywhere except on reel 1. Wilds serve as a substitute for all symbols on the reels and help to form a win. You’ll notice that wilds can expand on the reels, while the special fuel tank symbol is collected in a metre located from the right side of the grid. By filling the bar, you’ll be able to activate the main free spins bonus game that we’ll discuss below.

The Astro Newts Megaways slot has a 95.9% RTP, which is pretty standard compared to other slot titles. The volatility is medium to high, which indicates that the bigger wins come in the free spins feature powered by different modifiers and engine variations. At the very best, this slot can deliver a win of up to 20,000x your stake from a single spin, which is not bad for a slot machine.

If you want to learn more about RTP and variance slot models, read our in-depth Variance, Volatility and RTP guide and see which one suits your preferences.

The game format of the Astro Newts Megaways slot offers you a chance to play with a reel structure that reaches 235,298 ways to win in the bonus section. The reel play is powered by the cascading reels mechanic that “blasts off” symbols that participate in a winning combination. Then, new symbols drop and replace the respective positions. The cascades continue as long as you form wins on the grid.

But, cascades are just the beginning of this trip to space. Iron Dog included their trademarked feature called Mega Fission that splits symbols on the grid and increases the number of ways to win. Keep an eye on the sleeping piggy, as it can activate the Pig on the Moon feature and add expanding or regular wilds on the reels.

Finally, the free spins bonus game will take you through different levels where you’ll visit other planets! Now, let’s look at these features in more detail.

Expanding wilds can appear anywhere except on reel 1, just like the standard wilds. When the green W symbol lands on the reels, it expands and turns the whole reel wild. This can lead up to 5 wild reels per spin, delivering a pretty exciting reel action.

Pig on the Moon

The little pig wearing an astronaut helmet can appear during random spins and trigger this particular feature. It can appear in both the base and bonus game and win you one out of two award options. That will be either up to 2 expanding wilds or up to 4 standard wilds, depending on your luck at that moment.

In our intro, we mentioned that there’s a special metre from the right side of the reels that collects the special fuel tank symbols. As soon as you manage to collect 6 of those tank symbols, you’ll activate the Free Spins game and receive 8 free spins. Every time you collect 4 more tank symbols, you’ll visit a different planet that gives you 4 additional free spins. In total, you can win 24 free spins during this game. Each planet brings in a different modifier to the game, and here’s how they work.

The Astro Newts Megaways slot is developed with HTML5, meaning that it can be played on all desktop and mobile devices. This technology enables the slot to load without issues, no matter your device’s type or operative system.

If you like Iron Dog’s approach to online slots and what they offer in terms of gameplay, win potentials and visuals, check out their other releases and see how you’ll like them. We’ll recommend their recent slot adventure inspired by the tales for Robin Hood called Robbin' Robin, a title that also features many reel modifiers and boosts.

If you prefer to stick to the Megaways engine, check out the Irish-themed Rainbow Wilds Megaways, where you can win up to 12,000x your stake in a single spin. Or, you can meet Blirix, the brilliant alchemist, in the Blirix Workshop slot, where he’ll work your way through the free spins feature, enabling you to play with up to 40 free spins.

Iron Dog did a fantastic job with the Astro Newts Megaways slot, combining the visual and mathematical aspect of the game brilliantly. We won’t be wrong if we say that this is probably their strongest game released in the past few months. Don’t be fooled by the cartoonish, innocent and charming graphics, as this space machine has the potential to win you 20,000x your bet, which is impressive. We warmly recommend you to explore the options of this slot game, as there are a lot of bonuses and features that will make your reel experience even more enjoyable.

Explore the Astro Newts Megaways slot by claiming a welcome offer right from this page and play at top-rated online casinos.