The game comes with a layout of three rows and five reels that spin across 10 paylines. This arrangement can turn up winning outcomes with at least two symbols and spins can be made with as little as 10p. The variance of Crown of Avalon is high and the theoretical Return to Player (RTP) is 96.00% 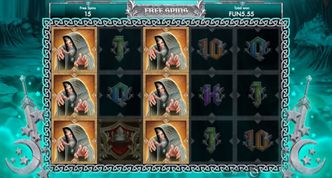 Iron Dog Studio is inviting players on a quest to finding the crown that is as if by magic, bespoke to Arthur, to complete his ownership of the glorious sword. The game at hand is called Crown of Avalon slot and it is part of the 1x2gaming Network of online slots. Players are going to discover an exiting reel adventure that can trigger winning outcomes of up to 5000x multiplied by the bet.

Iron Dog Studio has equipped the game with an expanding wild symbol that is standard and one that is a special symbol that has the same capacity in the free spins bonus. Even though there is a single bonus feature and an expanding wild, the base game is exciting and can trigger big winning outcomes, especially for five symbol of the same kind.

In terms of graphic design the game has been crafted in a style that is prevalent across releases by 1x2Gaming. The characters are all reminiscent of those that most people are aware of, that belong to the Arthurian lore. Players will find a grey-caped Merlin, a fairie, Guinevere and the king himself, dressed in full body armour.

Crown of Avalon slots has a lively gameplay which emerges from the animated details on the reel set. The sword emerges from the stone to expand on the reel, which is the wild symbol working in its full capacity and the winning outcomes made of picture symbols cause each character to get in motion in a cool animated visual effect.

The soundtrack is composed of a medieval melody that is punctuated by various sound effects when winning events and close-calls emerge in the gameplay.

How to Play Crown of Avalon Slot

Players can start spinning on the reels of this game right away by pressing the spin button, which is located in the bottom-right corner of the screen. As per the usual, each turn on the reels takes out one time the active bet from the balance.

Another way to play the game is by selecting the autoplay button, which is the first button to the left of Spin. This button opens up a list with automatic spins presets that the players can set forth right away. When selecting the menu button the game enables more options regarding the automatic spins, such as conditional stops and notifications.

Crown of Avalon slot has a range of bets that starts at 10p per spin and ends with a maximum of 50.00. Players can choose their amount from between the two ends by pressing the button that has two small coin stacks on it.

The button with a question mark on is the one that shows the paytable. This is where players can view the payouts for each symbol and the information about the bonus feature and the expanding wild.

How to Win Crown of Avalon Slots

The crown can be won for Arthur by landing a strong winning outcome. At least that translates the feel-good feeling of success. The game can make big wins with the help of the expanding wild in the free spins bonus, but the base game of Crown of Avalon slot can also trigger sizable payouts.

In terms of value, the symbol that we all want to see land on five positions is that of Arthur because it pays 2000x multiplied by the payline bet. The crown wild/scatter symbol also pays 2000x. The remaining picture symbols pay between 5x at the least for two of a kind and 500x at most for five of a kind.

Those who play Crown of Avalon and make it to the bonus get 10 free spins when the wild-scatter lands in three, four or five positions. In the free spins the high-paying symbols tend to come in full stacks.

Players can try the game and its features in the free play demo slot, which has been made available by Iron Dog Studio. Players get a number of free credits that are demo credits as the wins made with them don’t count.

The game comes with a familiar look and feel of the 1x2Gaming Network and the feature is also already seen so that we can have a sense about what it can do. The high variance is interesting because it can nudge the game to triggering big wins, especially in the free spins bonus.

Find a proper casino that has Crown of Avalon slots right from this page. Make sure you claim the welcome bonus and enjoy the paradise island theme.