Meet Robin Hood, England’s most famous local outlaw and join his crew of Merry Man in the online slot game by Iron Dog called Robbin’ Robin. Of course, you’re not going to rob Robin during this game, but let him help you trigger impressive wins with different modifiers and extras. You can look forward to features including free spins, sticky wilds, multipliers and expanding wilds that can win you 7,500x your bet. Moreover, this reel action enables you to play with 5 scatter symbols that activate different modifiers during the bonus round. Find out more about this folk tale slot theme in our in-depth Robbin’ Robin slot review. 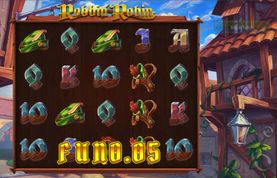 Iron Dog explores medieval times and launches their special take on the Robin Hood fairytale called Robbin’ Robin. Placed on the streets of Nottingham, you’ll go back to the times where the Merry Men gathered together to hang out and hide from the law. This cartoonish slot game plays on 5 reels and has 1,024 active paylines. A few bonus features and extras enrich the gameplay, such as the transforming golden lion that turns up to four symbols into wilds. Also, we have the free spins feature that comes with up to 5 options, depending on the triggering scatter. Stay with us as we’ll cover all you have to know about this adventurous medieval slot title.

The Robbin’ Robin slot takes us back to medieval times and tells the story of Robin Hood, an infamous local hero who used to steal from the rich to give to the poor. Iron Dog, the developer of this slot game, did a great job portraying the atmosphere in a cartoonish yet outdated feel. The reel action is set across 5 reels, 3 rows and 1,024 paylines. To win, you need to match at least 3 symbols on a payline, starting from the leftmost reel.

Stakes per spin here range from £0.10 and go up to £25. Click on the coin button and use the + and – tabs to adjust your preferences and play with the stake you feel most comfortable. There isn’t much to look forward to when it comes to the bonus games. However, both the free spins and transforming symbol can get you closer to the maximum win of 7,500x your bet, which is not bad when you look at the math model. We’ll get to that in a bit. Now, let’s explore the visual experience and graphics of the Robbin’ Robin slot.

As we’ve mentioned previously, the inspiration for launching the Robbin’ Robin slot comes from the story about Robin Hood and his Merry Men gang that helped the poor. The gameplay is set in the middle age on an old Nottingham street. Reels are set against traditional wooden houses lit by city lanterns. Also, you’ll notice the “Wanted” posters with the image of Robin Hood, just to remind you who’s the main protagonist in this reel action. The traditional soundtrack in the background complements the atmosphere, while the visuals respond to the template’s outdated, middle-age feel.

On the paytable, you’ll find the classic set of A-10 royals accompanied by mugs of beer, hats, arrows, bags of gold and gold chests. The gold chest is the most rewarding symbol from this collection, paying you 5x your bet for 5 of a kind. The target symbol is the wild symbol that serves as a substitute to form a win. Also, there are five different bonus symbols or scatters that trigger different options during the Free Spins bonus game which we’ll discuss in short. Keep an eye on an exceptional symbol presented as a lionheart emblem that transforms itself into a wild and can turn other symbols into wilds.

The theoretical RTP (Return to Player) of the Robbin’ Robin slot is 96.4% which is slightly better than the industry standard. What’s more, the game has a medium to high variance, so expect both small and bigger wins during spins. The highest prizes and the biggest win potential will come from the free spins feature triggered by 5 different scatters. The Robbin’ Robin slot can deliver a payout that goes up to 7,500x your total stake from a single spin. Here you can read more about the Variance, Volatility and RTP in online slots and see which model suits you best.

We already said that the free spins feature has the greatest potential to deliver a big win and boost your totals. However, there are few extras on offer that can help you achieve that also, such as the Lion Emblem feature that transforms symbols on the reels. Let’s see how these bonus games work in more detail:

This is a special symbol represented by a golden lion. As soon as it lands on the reels, you activate the LionHeart Emblem feature. Here, the golden lion transforms into a wild symbol and turns up to four standard symbols into wilds too. This way, you’ll have many target wilds in view, and you’ll definitely look forward to triggering this feature.

One thing that’s characteristic of the Robbin’ Robin slot game is that each reel has a separate scatter symbol. If you land at least 3 scatters in view, you’ll trigger the Free Spins feature and play with 10 free spins. Each scatter applies a different modifier during this bonus game. Here’s what they’ll offer you:

There’s a chance to land multiple scatters in one spin. In this case, you can combine their features that lead to an impressive reel action. Also, every lion emblem that lands during the Free Spins session adds +1 free spins to your total and increases the multiplier by 1.

The Robbin’ Robin slot is built with HTML5, which ensures that you’ll receive a top-notch gaming experience on all devices, including mobile. You can easily access the game on any Android, iOS and Windows device, where it will perfectly adjust to your screen.

Iron Dog is an established slot game developer that has released many slot games with high-quality design and generous math models. We recommend you check out Rainbow Wilds Megaways, an Irish-themed title powered by the Megaways mechanic that can win you 12,000x your bet. Another Megaways title inspired by the Ice Age cartoon franchise is the 1 Million Megaways BC slot. Once you set up your bets, you can spin the reels for a chance to win up to 45,000x your bet, which is impressive. If you like to explore other slot games inspired by a legend or a story, then Dr Jekyll and Mr Hyde is the perfect choice for you. Set in the 19th century with a goth, spooky feel regarding the design, this duo can lead you to impressive wins and payout boosts.

The Robbin’ Robin slot is an excellent slot game that offers straightforward, engaging gameplay. Iron Dog stayed true to the theme and delivered a high-class slot with reel action powered by scatters, symbols with transforming powers that can win you up to 7,500x your bet. If you’re a fan of the story about Robin Hood and his heroic moves, we recommend you to explore the gameplay and meet his friends on the reels. This way, you can learn more about them and test their potential to trigger big wins. Good luck!

Discover the Robbin’ Robin slot by claiming a welcome offer right from this page and play at top-rated online casinos.