Immortal Glory comes with five reels and four rows that spin across 40 paylines. The reel-set can bring about an amazing reel adventure, as well as one of three jackpot prizes, which, without any surprise, are titled Bronze, Silver and Gold. The game has high variance, a theoretical return to player of 96.19% and maximum exposure of 10,000x multiplied by the winning bet. 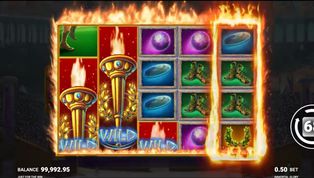 Microgaming is releasing a game by Just For The Win where the Olympic flame keeps the reels burning hot for the potential winnings. We are talking, of course, about the wild symbol that can come fully expanded on the reels, or partially so. This isn't the only feature in the Immortal Glory slot, as there is only part of the free spins bonus where the players can receive help from the game's nudge wild feature.

The players will find the glory of athleticism, inspired by the ancient Olympic Games, back when football and curling were not a sport. Those who decide to try their luck on this particular game will find 40 fixed paylines, something called a Glory Spin, multipliers, and dynamic gameplay that can unfold with any spin on the reels.

In terms of the graphic design Just For The Win have went for the tempera on canvas style which has resulted in fine, glossy images of athletes and Olympic sports requisites. The first represent the high-paying symbols while the second description is for the low-paying category of symbols. The background is an amphitheater which sets the stage for the events on the reel-set.

Immortal Glory slots features the three jackpot prizes prominently on top of the reels. The rest is one fine example of slotsmaking, where the art goes hand in hand with the quality of the gameplay. Winning outcomes are surrounded by the light to point the symbols involved in the win. Some visual effects are present, which makes the game lively just enough that it isn't overbearing on you.

Last but not least, a musical theme spells out the nature of the theme and does well to fill-in the ambiance.

How to Play Immortal Glory Slot

Playing the game requires setting up the bet first and foremost, unless you want to play with whatever amount was set by the online casino as a default wager. The controls have been laid out in the style of other games by Just For The Win, so the players will find all the buttons on the right side of the reel-set.

In terms of the bets, the game has a range that begins with 10p per spin and the maximum is £25.00. The bet amount can be selected from the right hand side of the reels, by pressing the poker chip button, which opens up a grid with all of the available bets.

One way to play Immortal Glory slot is by activating the automatic spins. To do that, press the middle of the three smaller buttons. Once in the menu, it is possible to choose the number and add optional controls, which can help the players set conditions to prevent spending above the specified limit.

Another detail from the ‘how to play’ part is about the paytable. The players can view information about hte bonus features and the symbol payouts by pressing the three dots button in the upper right corner of the screen.

How to Win Immortal Glory Slots

Payouts are made with three or more matching symbols and wins one more than one payline can occur from any given spin. The game has a wild that substitutes for all other symbols, and this is a wild that can expand on the reels. During the base game the wild that comes on partially or fully on the first reel results in five free spins.

In terms of payouts, most valuable symbol on the Immortal Glory slot is that of the cannon-ball thrower, carrying 5x for five symbols. It is obvious that this is rather a low amount for a five-symbol win, for the best of the picture symbols, and the only explanation is this is a jackpot slot.

The Immortal Glory jackpot is paid when three jackpot symbols appear on reels one, three and five. In the event, the game awards a random prize of 20x, 100x or 10,000x multiplied by the triggered bet.

When the five spins have been awarded by one full or partial wild on the first reel, the game gives the nudging capacity to all wild symbols. The bonus can retrigger if the fifth spin has a full or partial wild on any of the reels. This is the Glory Spin feature. If that wild symbol is full, it will remain in its position. If it is partial, it will disappear. The rest of the reels will go for a respin and the result of that spin can get a multiplier of 2x, 3x, 5x or 10x.

The game can be discovered as a free play demo at online casinos that have slots in “practice play” mode. This enables players to play for free and check out the features.

The game has three jackpots, wilds that are quite useful when they are present but low base game payouts. The balance is tipped favorably by the Glory Spin feature on the last free spin, which can trigger one hefty payout thanks to the multiplier value.

Discover the Immortal Glory slots by claiming a welcome offer right from this page and play at top-rated online casinos.