Reel Talent is a game developed by Just For The Win, available at a range of Microgaming casinos. Read more about it in our review. 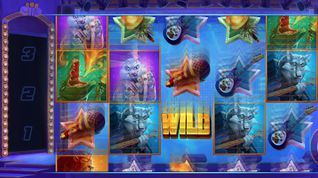 It takes talent to create a quality online slot, and we can safely say that the makers of Reel Talent slot are quite talented (pun intended). But we aren’t actually joking, Just For The Win, got pretty creative with the idea for this game, as well as with the execution. Just for the Win are working with Microgaming, so their games are available at many Microgaming casinos.

Reel Talent slot is a game with a unique theme. You will see animals on the reels, and while there are plenty of other games with an animal theme, we have to say that the kind of animals that you can see in Reel Talent slots are very different, as are their roles.

If we have a look at the layout, it may seem that this is a rather standard game with five reels and three rows, but that’s pretty much the only standard thing about Reel Talent slots. The background is blue/purple, and although the shade is darkish, you’ll also see a bit of sparkle.

Let’s discuss story and plotline. What we’re seeing here are animals that participate in a sort of a talent show. You will see a wolf holding a guitar, a rabbit doing card tricks, a lion with a microphone and other cheerful animals.

The music is also quite cheerful and entertaining, much like the gameplay, so if you like music-themed games, but you also fancy games featuring animals, you’ll probably like Reel Talent.

While the animals that appear on the reels are undoubtedly talented, there’s no such thing as a talent for slot games, all outcomes are entirely random and you have no impact on what’s happening on the reels.

How To Play Reel Talent Slot

Before the reels can start spinning, you will need to select your wager and then all that’s left is to press play and watch the action unfold. You just need to press the casino chip-shaped button. The game comes with ten paylines and the minimum stake is one penny per line, so you can spin the reels with 10p per spin.

The maximum amount that you can stake on a single spin is £100. The play or the spin button is the largest button and you’ll spot it immediately. Even though the stake is calculated per payline, the sum is given as a whole when the wagering window is prompted.

There are other buttons that give you range to other options, but in order to trigger them, you will need to click on the button featuring three dots. From there you can toggle the sound effects of, or on again if you have previously turned the music off.

How To Win Reel Talent

This game features 20 paylines and for a win, at least three symbols need to be arranged across an active payline. The symbols have to be arranged from the leftmost towards the rightmost reel. In the paytable all winnings are shown as times your total wager.

Thus, the lowest amount that you can win is 0.3 times your wager and this win is triggered when a combination consisted of three card symbols appears on the reels. Three guitars pay 0.4 times what you’ve wagered and so on.

In addition to the standard in game symbols, Reel Talent also features special symbols – wilds and scatters, but we’ll talk a bit more about these symbols below.

The wild symbol features the word ‘Wild’ on the logo, so it is not difficult to spot it. This symbol replaces all other symbols that appear on the reels, but it can’t be collected.

This is one of the most exciting features in Reel Talent slot. This bonus comes with three stages, and only the symbols that initially appeared in the Symbol Storage will be pop up on the reels. If you reach the third stage you’re in for a guaranteed win. All wins that you manage to acquire during Superspin will be added to your total winnings.

This feature is triggered when some positions in the Symbol Storage remain empty after a win. The feature is over when such positions no longer exist.

We’ve mentioned the Symbol Storage, and when it is filled, you get a Superspin. You will see the storage, displayed on the left of the reels.

With its Symbol Storage and exciting symbols appearing on the reels, Reel Talent slot is a game that will definitely be one of the players’ favourites in the upcoming period.

Register with one of our partners and claim your bonus, then you can play Reel Talent and a range of other games!