Experience the land-casino slot machine Red Fortune, now available to online casino players also. This is a five-reel and 30-payline slot machine with a free spins bonus which is triggered by landing three or more scatters. The free spins bonus offers 2x and x3 wild multipliers and the base game offers symbol replacement on the first two reels, towards the effect of symbol-stacked reels. The Red Fortune RTP is 96.01% 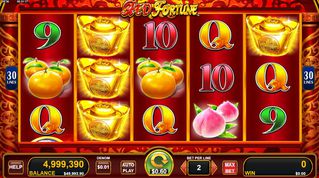 Play the Red Fortune slot to discover the symbols that represent the meaning of luck thanks to the x2 and x3 multipliers and a free spins bonus.

Red Fortune slot is in the spirit of the most ubiquitous color found across all of China. Since ancient times the inhabitants of this land have revered the color and its hues, and throughout the ages red has retained its meaning: the color of good luck. In combination with the color of gold, we have so many objects that are traditionally used around the country, such as dragons and columns and the sycees that are so omnipresent in almost every slot game with an oriental theme.

How to Play Red Fortune Slot

Nevertheless, we have a pretty decent slot here, with 30 paylines, a bonus feature and payouts that are quite all right. The always active 30 paylies work behind the five reels and three rows. The range of bets is also quite standard as it starts with a denomination of just one penny per line. That translates to a starting bet of £0.30 when playing on the first bet level for the bet per line.

The denominations go through several values, of which the biggest coin size is £0.50. That translates to a medium-sized bet but still on the high-stakes side, of £15.00 per spin when playing on the first level, but those who wish to dial up the bet to red levels, the fifth and highest bet per line level will convert that amount to a total of £75.00 per spin.

To set the reels spinning simply hit the round green button that lies just underneath the third and middle reel. And whoever wants to let the game turn the reels on its own, the autoplay option is there to fulfill that demand. Selecting it will open up a box with a number of presets for the automatic spins. In the Red Fortune slot the autospins don't come with the option of setting a win or a loss limit, so the players will simply have to be mindful of the balance or of the starting bet per spin.

How to Win Red Fortune Slots

If anyone wants to check out the symbol pays, the paytable is there to provide this information. Locate the Help button, which is in the bottom left corner of the page, and from there select the Help/Pay tab. This launches the paytable with all of its useful information about the symbol pays, basic game rules, what triggers the bonus feature and what symbols can occur during this game, and few other bits of information, such as the Red Fortune RTP.

One of the most sought-after parts of the paytable are the symbol pays. In that regard, we have several high-paying symbols that the players may care to know. The most valuable symbol is the scatter, represented by the yin and yang sign. When five of these occur on the reel-set the prize is 600x multiplied by the line bet. Four of these symbols will, however, pay a lot less - 10x on the line bet, and three equal 4x.

The golden Chinese character for luck is the wild symbol in Red Fortune slot. The wild appears only on the last three reels: three, four and five. It substitutes for the standard picture symbols and the low-valued symbols that are represented by the royal and high cards.

Subsequent high-paying symbols are the golden syzee (ancient currency unit) which pays 200x, followed by jade medallion which paus 150x, and these two are followed by fruits and a stalk of bamboo, each paying 100x and 80x respectively. The values stated above are all for the winning instance of five matching symbols, and each outcome is multiplied by the line bet. The values remain as such regardless of the size of the bet.

This slot game does have a free spins bonus, however, there is another feature that may be considered one. Precisely, reels one and two have adjacent positions whose symbols can be replaced with any of the standard game symbols. This is done at random and the result is a stacked reel of the same symbol, which is part of Konami's Action Stacked Symbols feature which has been introduced in a number of their slots.

What is more, the wild symbol in Red Fortune slots becomes a wild with a multiplier. It could appear as 2x or 3x whenever the wild is part of a winning combination but during the free spins only.

The game’s Return to Player theoretical outcome has been set at an average of 96.01%

The game has a free spins bonus and an option for stacked reels. But what is more, there is a multiplier of x2 and x3 whenever the Wild symbol becomes part of a win during the free spins. That gives us enough reasons to try the game and enjoy it.

Play this and many other slots at one of the mobile-friendly casinos on this page. Claim a welcome offer to start.