The layout of the game is three rows and five reels and these spin across 20 always-active paylines. A high variance random number generator model is coupled with a theoretical RTP of 97.50%. Winning outcomes are made with three or more symbols and bets begin with 20p per spin. A Pirate Quest comes with a maximum payout potential of 1000x that can occur from a single bet. 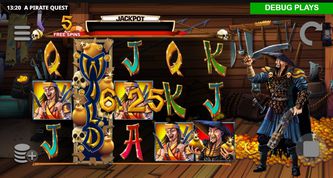 Leander Games has lacquered their pirate ship and oiled the helm for the reel adventure that lies ahead on the high seas and in the company of pirates. The game at hand is called A Pirate Quest slot and puts few pirates, armed to the teeth, as the high-paying symbols, ready to take on the extra features and other details that make it a fun game to play, which, by the way, comes with a jackpot prize.

The player's interaction with the game begins with choosing a flag for your pirate adventure. A Wild symbol substitutes for all symbols, except the scatter, which triggers the bonus spins game, however, there are few additional features on A Pirate Quest. The game has a notable RTP amount which is another of the highlights.

In terms of design features the game has been treated to some amusing characters whose images have been drawn and rendered rather well. There are three such symbols plus the game logo. The remaining symbols belong in the low-paying category, and as per the usual they consist of the royal cards and the ten card.

A Pirate Quest slots doesn't really have any animated symbols. The winning symbols simply flash on the screen and the weapons that each of the characters is holding are given a quick glimmer. Sadly, this doesn't compensate for the lack of animation in the base game and that would have done the pirate theme good. Nevertheless, the free spins bonus is quite lively and the musical theme is decent enough and most players won't get bored of the game.

How to Play A Pirate Quest Slot

Players can start spinning the reels and with that this pirate's ship helm towards the high seas and potential bounty, by simply pressing the big spin button which can be seen in the bottom right corner of the screen.

There are few more buttons in each of the remaining corners. Players can play A Pirate Quest slot in autoplay mode by pressing the half-arrow in the upper right corner. The menu offers several presets for the number of automatic spins plus the option to stop the spin upon meeting a loss limit amount or when the free spins bonus is triggered.

The bets can be selected from the bottom-left corner where Leander Games has placed a button that appears like a stack of coins. The range of bets is quite wide and begins with 20p per spin, which is one penny per payline. The maximum bet on A Pirate Quest is £200.00.

There are three settings that can be accessed from the menu button in the upper left corner: sound, music and turbo spin. The 'i' button opens up the paytable where players can view the amount for each symbol payout.

How to Win A Pirate Quest Slots

The payouts range between amounts that don't return the full bet, for which the cards symbols are responsible when the winning outcomes number three and in some cases four of a kind. On the other hand the picture symbols can generate prizes that are quite solid.

Most valuable payout comes with the wild symbol. If it lands in five positions on a payline, the player gets 1000x multiplied by the payline bet for five, 400x for four and 100x for three of a kind. This symbol also pays with two symbols but the prize is 5x the payline bet.

The remaining picture symbols of A Pirate Quest slot start at 25 and end at 50x for three of a kind; 100x and 200x for four of a kind and between 250x and 400x for an optimal win with five matching symbols.

The game has a scatter symbol that's represented by an open chest filled with gold coins. Players need three of these to land on reels one, three and five to trigger the free spins bonus.

The bonus lets players decide the volatility and then select from the treasure chests in order to accumulate the number of free spins and multipliers.

A random modifier that can trigger on any spin causes a pirate to swing across the reel set on a rope and throw a number of bombs that create wild symbols in those positions.

The game is available as a free play demo slot at online casinos that have Leander Games productions, including the game at hand.

There are plenty of pirate-themed slots, including megaways games, so this game has to be noticed. Otherwise, the features are interesting and the theoretical return to player is significantly greater than most slots.

Discover the A Pirate Quest slots by claiming a welcome offer right from this page and play at top rated online casinos.