A game filled with extra features, including a expanding wilds, respins, a pinball-like bonus game and a mysterious buddha that appears on the reels and apparently doesn't do anything - but who knows? All this is part of the 20 payline Balls of Fury slot by Leander Games. The game has a ball meter which triggers the bonus play. 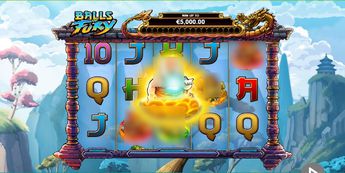 Win up to 40,000x on the engaging Balls of Fury slots. Play for a chance to collect orbs and trigger the Dragon bonus.

Shaolin schools high in the rocks, touching the clouds. It's come to our attention that this setting setting is apparent in quite a number of online slots lately. Leander Games are jumping on the trend, if we may call it that, to bring us the Balls of Fury slot. In the game, the players will meet some strange creatures that can deliver martial arts blows for the money win.

The game plays on three rows and five reels, a standard fixture which comes with 20 always active paylines. By the first looks of it, Balls of Fury seems like a decent slot game. It has the visual basics down right and potential wins that aren't too great but which we can't call meagre either. This is especially true considering the bonuses which can trigger thanks to the balls that are collected on the dragon meter above the reels.

Punters may encounter the expanding wild feature or any of the extra features and reel modifiers, such as Lucky Buddha which activates respins and utilizes the collectable balls. Additional treats include the dragon brooches which trigger a Bonus Ball, Colossal Column, Super Row or Ultimate Ball. After all, this isn't a simple online slot as there is more to be seen during the gameplay.

The game is marked by elements of the familiar imagery found on this theme. The high-paying symbols consist of three monsters, which are meant to be the protagonists who excels in the art of Balls of Fury slots.

Our reel-set is topped by a pagoda of sorts which has three displays: the ball counter and the size of the jackpot, which is relative to the triggering bet. All this is topped by a golden dragon, while the background is a mountainous landscape, high in the clouds and dotted by temples and trees.

An epic musical theme has been composed to keep the players company during the gameplay.

How to Play Balls of Fury Slot

Leander Games have created a clean view of the reel-set by tucking away all of the controls and the play button way below the reels.

In the bottom right corner is the blue, round Play button. PRessing it will send the reels spinning once and pressing it immediately after will cause the reels to stop short. As it is always the case, each spin deducts the active bet one time from the balance.

Balls of Fury slot offers a range of bets, with amount that fit the preferences of both casual and pro players. The smallest bet per spin is £0.40, which reflects some sort of high minimum for an in-game progressive jackpot slot. The maximum bet is £80.00 per spin.

To the left of the Play button is the option for Fast Play, which causes the reels to spin faster, and to the left of that button is the Autoplay option. There the players can choose between 5 and 100 automatic spins, without additional options that stop that mode on a specific event, like a maximum win or total specified loss.

How to Win Balls of Fury Slots

Wins are made of three or more symbols of the same kind. These outcomes need to start on the leftmost reel and connect on adjacent reels and can result with up to five connected symbols.

Balls of Fury slot has three picture symbols that belong in the high-paying category. These are a wild boar, a lizard and tiger. In terms of the value the first symbol pays 1000x for five of the same and 100x for three, multiplied by the payline bet.

The rest of the symbols are the high cards, starting with 10 and ending with the ace. These pay between 1-x for three of a king to up to 100x for five of a kind.

The game packs a wild symbol which can expand on a full reel. If there is a win the expanded wilds stay in place for a respin. Additional wilds on the respin stay in pace for a respin that treats them. Respins end when no other wilds have appeared.

There is an option to lock the wilds which comes at a cost. This can be opted in from the Re-Spin Buy Feature.

The Lucky Buddha feature is a random event that can appear on any spin. It triggers either an expanding wild or adds up to three balls in the Dragon meter.

The dragon symbol appearing in the base game adds one orb to the counter. When the counter is filled with 18 balls, the bonus is triggered. A second screen game comes to the fore and looks like a pinball machine. If the screen is filled with the balls there is a hefty payout.

Leander have come up with a marvellous game that was worth releasing as a free play demo.

Even though there isn’t a free spins bonus, there is enough going on in the game that a fun-loving dynamic is created. Even on the smallest bet, any five-symbol win will be worth it and there are reel modifiers and the Dragon bonus that can result in a big win.

Claim a welcome offer from this page and discover Balls of Fury slots at top rated online casinos.