Don on the archaic diving suit and enter the waters to find a sunken treasure which can pay up to 300x. Or, see the Kraken and five of its tentacles and win the top payout of 1000x. The Kraken Conquest slot is filled with bonus features and surprise moves, as well as multipliers of up to 8x. The free spins bonus can get retriggers and there is a pick-me game. 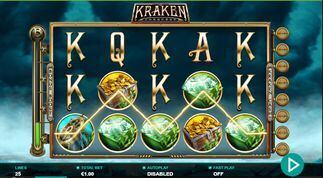 Play for a chance to win cash prizes of up to 5000x on the line bet plus 8x multipliers on the Kraken Conquest slots.

If you are disgusted and creeped out by tentacles or believe that you may be beset by trypophobia, then avoid the Kraken Conquest slot. This Leander Games release is all about the above, plus fist-sized diamonds, chests of gold and the potential cash prizes that can be generated on the 25 paylines.

The reel action on this slot takes place on three rows and five reels on a background of stormy sea and something huge lurking underneath. Is it a huge monster or huge winnings, or both? The payouts are made from left to right when three or more of the same symbols fall on the Kraken Conquest slots 25 always active paylines.

The game packs a number of features that can bring on an even more exciting gameplay. There is a wild that substitutes for all but the scatter. There are bonus features too, like the Lightning Strikes feature and the Kraken Slap, as well as multipliers of up to x8. But this isn't all as there are more features in this bonus-filled slot.

The game design is rather solid and brings out the excitement of the theme. The slots experts at Leander have given it all the attention and hard work it deserves so the Kraken Conquest slot has a lot to offer to pro and casual players.

The background is animated with the sea waves churning and rising. So does the sky, with black clouds cast over a tiny slither of blue. So we have a brighter outlook for the symbols which display gold and diamonds and a helm, albeit sunken.

And the game wouldn't be called that if it weren't for the thing that shows its tentacles every now and then. So it wasn't the stuff of legends, the Kraken is real, and resides there where the gold may be hidden.

How to Play Kraken Conquest Slot

The game starts with a default bet in your casino's currency or if available, the currency of your choice. To change the amount of the bet you need to locate the Total Bet window in the bottom panel and click or tap on that. The list of bets there ranges between £0.50 for the smallest wager to £50.00 per spin for the biggest.

Because the number of paylines is always-active at 25 the smallest bet extrapolates two pennies per each payline and the highest bet extrapolates £2.00. According to the same logic you can deduce the size of the line bet for each occurring win on a payline.

The players can choose to set the game in the autoplay mode by selecting one of the automatic spins presets under that button. When the fast play button that is to the left of the Play button is toggled on, the spins will take faster to make the turn and stop.

How to Win Kraken Conquest Slots

Another way of landing winnings is in one of the bonus features, such as the pick me game, where the cash prizes are revealed from the good picks you've eventually made.

The Kraken Conquest slots paytable reveals all of the symbol pays. The most valuable symbol of the game is Kraken in flesh. This is the wild, which can expand on a full reel. When it falls in five positions the prize is 1000x multiplied by the line bet, plus the eventual wins that have come from the wild interacting with other symbols.

The picture symbols pay the heftier payouts in comparison to the high card symbols. The heaviest pay in this category comes with the archaic underwater suit which brings 500x on the line bet, followed by the diamond with 400x and the chest of gold with 300x. The ship helm pays 200x.

The main bonus feature of the game are the free spins. These are triggered when three or more of the Kraken scatters fall on the reel-set.

The player gets a chance for additional spins with two or more of the scatter symbols occurring again.

The wilds can expand at random in the Kraken Conquest slot bonus too.

As for the random features, the Lightning Strikers is one of these. A lightning strikes the reels turning up an instant win which are in addition to those that may have already occurred.

The Kraken Slap causes the wild symbol to expand on the reel or reels.

The Multiplier Tentacle is a symbol that carries a number, either x2, x4 or x8. This is counted towards the Kraken Cash Meter which is deployed during the bonus of the same name.

Leander Games may have included this game as demo somewhere online, however, your safest bet is to explore the game at an online casino which offers demo play to registered customers. Another way to go is to play with the smallest wager, which, admittedly, is not a nimble amount and one which allows you to test the game and not feel like you’ve spent a notable amount of money.

We have here a game that is full of surprise features, such as the Kraken Slap, among all the other. This and the free spins and the pick-me game on top of it all, spell out a thrilling adventure on the reels and the wins can become quite significant, especially with the top multiplier of x8.

To discover Kraken and its treasure, claim a welcome offer and play Kraken Conquest at one of the online casinos on this page.