For starters, the game comes with all the things that signify the grit of the cowboy, rancher, renegade life. That's pretty exciting in and of itself. Then there are the game features. The slots developers at Leander Games have made the maths work across 243 ways to win, but there is the Dynamic Ways system which can increase the size and position of the reels in any given spin. 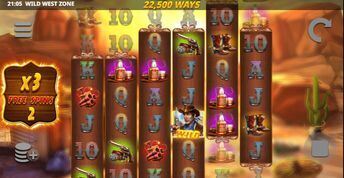 For those players who are into everything and anything Wild West, getting in the Wild West Zone slot isn't going to be any difficult at all.

The game takes you on the main drag of a typical dusty town, where the players can find a reel-set of five rows and five reels. We haven't seen any slots with that kind of a layout in this particular genre, so naturally, we paid some more attention to what Wild West Zone can offer.

In other words, the 243 ways can go up to 3125 ways to win. The standard elements to a slot game are present, such as a wild symbol and a scatter/bonus. Then there are extra features such as respins, multipliers and an extra reel added for the free spins feature.

When it comes to the game design, Leander have created what is first a foremost, a very dynamic game. The ways to win in combination with the zones payout system brings out the best of this idea.

Not much work has been given on the symbols, how they appear and the fact that they are not animated when part of a win. This is because, quite simple, the focus is on the shifting reels and rows

Wild West Zone slots has an original banjo song that is quite folky and laid back, overall a major element that makes this game more memorable.

The slots makers at Leander have retained some of the old layout in respect to the game's settings. The four corners of the screen each contains one element of the settings and gameplay menu.

To send the reels spinning manually, press the corresponding button. This will deduct the selected bet one time per spin. Playing the game hands-free requires pressing the autoplay button, where you can choose the number of spins and add optional stops.

Choosing the bet on the Wild West Zone slot requires selecting one of the available bet amounts. In this regard, the smallest bet is 20p and the maximum bet is £20.00 per spin.

The highest paying symbol is the star, which brings only 5x multiplied by the winning bet for outcomes of six matching symbols. The dynamite pays only twice on the triggering bet for six symbols The reason why Wild West Zone slot has such low payouts, even with the best of the premium symbols, is due to the extra features, the multipliers and the Zones payouts.

Each of the game's five reels has its own Dynamic Ways zone which causes every individual reel to shift and adjust on its own. This is why the size of the reels can switch with every spin between three and five positions on the row.

The wild symbol landing inside any of the zones, the game will give a respin feature where the wilds become sticky. Subsequent wins extend the respins and every wild that appears in this sequence becomes sticky.

The game offers a near-miss reward even for not triggering the free spins bonus, for which you need three bonus symbols. Two of these symbols results in the Something for Nothing feature, which adds win multipliers for every two scatters that land inside the dynamic ways.

The carriage symbol triggers the free spins bonus when it lands on reels one, three and five. Eight spins are given at first and a sixth reel is added, which in turn increases the zones from five to seven symbols.

Every wild that appears on the reel-set adds a multiplier of +1x and these can go up.

The game can be played as a free play demo, which allows those interested in it to try it for free. Demo slots are available at some online casinos. The list of casino reviews has multiple casinos that offer demo slots.

The game comes filled with features and the ways to win dynamic is very entertaining, being able to generate more than 100,000 ways to win, in the same manner of any megaways slot. Wild West Zone has a maximum payout potential of 12,500x and a high variance.

Discover the Wild West Zone slots by claiming a welcome offer right from this page and play at top rated online casinos.