Lightning Box throws out a game of five reels and three rows which spin across 25 paylines. The payers will find the fun-loving "Blown Away slot" with wilds and scatters, which can trigger a 10 spin bonus game. A tornado symbol adds multipliers during the bonus, where the meter can rise up to 7x. Blown Away is a medium variance slot with a theoretical return to player of 95.70% 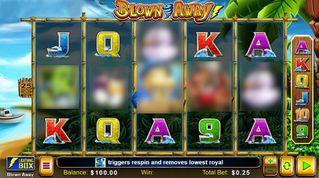 Invite the tornados because they do you good in the Blown Away slots, which can trigger 10 free spins and multipliers of up to 7x.

From the land down under comes a slot game that has survived a shipwreck and cometh out alive to provide an exciting reel adventure on three rows and five reels.

Lightning Box are the slots experts responsible for this release, which like their previous online slots, is just as engaging and potentially lucrative. The theme on Blown Away slot revolves around a fishing boat crew headed by an anthropomorphic walrus.

Wins are made with three symbols of the same kind which must fall on the left most reel and extend towards the right. There are 25 always active paylines which can turn up more than one payline win.

There are extras too, which can increase the odds of winning prizes. One such symbol is the walrus itself which is the wild, and there is a thunderbolt symbol (the company's logo), which is the free-spins triggering scatter.

Like in previous games, such as Respin Racer slot and Astro Cat, the players get treated to lush graphics. Lightning Box as a company has a recognizable style in how they draw the symbols and the layout all around, and that makes the reel adventure pleasurable on the visual end of things.

The symbols in Blown Away slots are cartoonish to say the least. There is a scientist lizard, and a monkey whose face looks familiar, and a walrus skipper, all in all, hinting at Gilligan's Island.

Win outcomes are brought out with a band, that is, with golden coins gushing out from the under the reel-set and throughout your reel adventure are nautical notes and ocean sounds.

How to Play Blown Away Slot

Start preparing for your voyage back at sea by selecting your wager for the spin and then pressing the play button. This button is the square in the bottom right corner of the screen. The bets can be selected by working the minus and plus buttons which are to the left of Play.

The smallest bet in this game is £0.25 per spin, and that reflects one penny per payline and the maximum bet is in the hundreds, where the bets per paylines start at £5.00 per payline and can reach as much as £10.00 per line.

If you want to engage the Blown Away slot with the autoplay mode of play, you need to press the circular arrows button, which starts the reel-set spinning on its own according to the number of automatic spins that you select. The bet will reflect the active bet that shows in the Total Bet window.

The menu button leads to a number of settings that can be applied to the game, such as toggle the sound on or off, or toggle the turbo spins option. There is also the paytable which shows the symbol payouts and information about the bonus features.

How to Win Blown Away Slots

Winning the game requires three symbols that belong to the same kind. These need to fall on a payline and there can be more than a single payline win that results from one turn.

The wilds are there to substitute for any of the standard game symbols, which excludes the the Lightning Box logo, which is the scatter.

Pictures symbols comprise the category of high-paying symbols. This is where we are going to see the lizard, the penguins, the walrus skipper, the seagull, the monkey wearing Gilligan's hat and, quite strangely, a shirt that seems awfully similar to his, and so on.

The thunder symbol is the game's scatter and falls on the odd-numbered reels (one, three and five). This symbol triggers the free spins bonus which is 10 spins that come with a kicker.

There is a high chance that you the tornado symbol drops on the reel-set. If this happens the lowest royal symbol will be removed from the game.

Throughout the bonus the players can get the cow meter up high by landing the tornado symbol. Each cow icon being lit equals 1x multiplier. On top of that there are multipliers which can factor the wins with as much as 7x on the bet.

The company isn’t overly known for releasing its games as free play demos, however some of of the games are available for that. So it’s impossible to know what’s in the mind of Lightning Box and how they choose which games are fit for demo, but who knows, any one of the online casino might get it available as free play for players who have registered accounts.

We have a fun-loving game at hand which has a free spins bonus with multipliers. Reaching the top of x7 or thereabouts is an amazing way to give a boost to your wins, which redeems the meagre base game wins.

Discover the Blown Away slots by claiming a welcome offer right from this page and play at top shelf online casinos.