Crazy multipliers of up to 25x, wild symbols and fireworks are just part of the features on the Toro Rockets slots. Lightning Box Games had made a game on five reels and 243 ways to win, which can turn up symbol wins with the wilds and without. A dynamic gameplay ensues each spin, especially during the Rocket Collection Bonus. 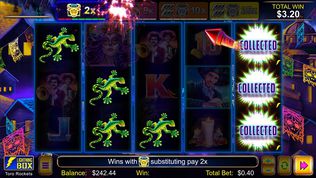 It's a bulls' run through the reels on the Toro Rockets slot and its extra entertaining gameplay. Made by the slots experts at the Australian Lightning Box studio, the game at hand plays on three reels, five rows and 243 ways to win.

The players will encounter a number of extras, including the game's most anticipated Rocket Collection Bonus where players can land multipliers of up 25x on the winning bet, plus with the wilds which come in the shape of a neon bull.

Winning outcomes on the 243 ways to win are made on adjacent reels with three or more symbols of the same kind. These outcomes most start on the leftmost reel, and as it can often be the case, Toro Rockets can trigger more than a single win outcome resulting from the same spin.

Although the title describes a game that's related to bulls and rockets, the setting is actually in Mexico, and not at any given time of the year. With the game, we are celebrating the Day of the Dead holiday, one of Mexico's most iconic.

Fittingly, all of the symbols refer to things related to the event: mariachi, a glowing gecko, candlesticks and skulls, rockets, a lady with a painted face, and so on.

The rockets in the Toro Rockets slots cause a lot of fuss, especially in the collect bonus. Each one that stops on the reels lights up and flies straight to the multiplier meter above the reels, causing a display of fireworks.

Overall, this is a dynamic, fun game to play and Lightning Box have decked it out full with a fitting musical theme and even more animated parts.

How to Play Toro Rockets Slot

Your run through the corrida can begin with the push of the green play button, which is found inside a square in the bottom right corner of the screen. This area contains two other button sets - one is for determining the bet per spin and the other is for the autoplay feature.

Before you push play you may want to check out the default bet that's been set by the casino. This figure can be seen left from the plus and minus buttons, in the area that clearly states Total Bet. Another look to the left is for the Win amount and another to the left is where the Balance is stated.

The bets on Toro Rockets slot start at £0.20 per spin and the players can choose an amount from a wide range, including high-stakes bets of £50.00 or more. Once you have picked you bet you can press play or autoplay, and you can change the bet between any two spins.

Having the Autoplay mode on lets you enjoy Toro Rockets without making manual inputs. Simply press the button and select from the automatic spins number presets and press play. Press the stop button to cause this gaming mode to stop.

If you wish to view the symbol payouts, bonus feature information and game rules you can refer to the menu button in the bottom left corner. This isn't necessary for the gameplay, however, because all of the payouts are marked and stated automatically.

How to Win Toro Rockets Slots

Making symbol wins in the game requires three or more of the same, starting on the leftmost reel.

Because the game has the ways to win payout mechanism, with 243 ways, the matching symbols don't have to occur in a row or in a specific pattern. It is enough to get them straight across the reels, regardless of the position on the row.

The most anticipated symbol is the wild because it boosts the number of multipliers during the feature, but it is also a wild symbol in the base game.

The game can deliver big wins thanks to the multipliers that can reach 25x on the winning bet during the Rocket Collection Bonus.

For each wild that stops on the reels in the feature game, a +1 is added to the collection of wild multipliers.

Another two meter sets show the number of rockets collected for the multiplier. The rockets also boost the numbers for the potential big wins.

It is expected that Lightning Box are going to release this online slot as a free play demo once the exclusive release period is done. The game in a free play mode can then be found at those online casinos that host demo slots.

With potential payouts of more than 1000x on the winning bet, the game at hand gets yet another thing that may trigger the players’ interest. As if the multipliers aren’t enough, there is the free spins bonus where things could get very interesting. Another one of their slots that has more bonus features but not quite the same bombastic multipliers is the Respins Racer slot, equally worth checking it out.

Discover the Toro Rockets slots by claiming a welcome offer right from this page and play at top rated online casinos.