Claim a welcome offer and discover the Venetian Magic slot which plays on five reels and 50 paylines. The game comes with a mighty wild symbol that triggers a shifting (sailing) wild that can occur from the fifth to the first reel, right to left, with subsequent respins. The game has a top payout prize of 40x multiplied by the bet and additional strong payouts. 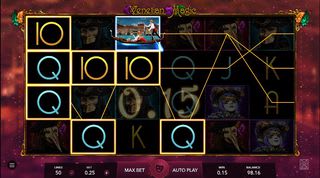 There’s a chance to win 40x with Sailing Wilds and Respins on the Venetian Magic slots. Claim a welcome offer to discover the game right here.

If sailing on the gondola and wearing masks ala Eyes Wide Shut is something you can readily enjoy, then check out this online slot that takes you to magical city of Venice. The city which has boulevards and alleys made of water is the perfect theme for a rare slot game made by Mascot Gaming.

The Venetian Magic slot has four rows, five reels and 50 paylines that are always active. As is it usually the case, the wins are made from left to right when three or more of the same symbols occur on one or more of the paylines. And that this isn't a bare slot machine is stated by the gameplay features that make Venetian Magic a slot that packs a real online casino experience potential.

The players can play for a chance to win symbol payouts of up to 40x, a wild symbol that substitutes for every other symbol on the reel set. Also, the wild symbol can deliver respins and the Sailing Wild feature. All of this may aid towards bigger and better winnings as well as increased chances.

At first some pro slots players may accidentally mix up this game with the Venice Magic slot, for obvious reasons. However, Venetian Magic has a different theme and in our opinion better gameplay. Unlike the clunky reels on Venice Magic and the thinner payouts, the slot at hand trumps it also with better graphics.

The graphics layout is dominated by deeper shades of purple and burgundy which casts a regal look and feel. That makes sense considering the masked soiree that is unfolding on the 50 paylines. Perhaps the only thing that sticks out is the wooden craft which is sailed by the gondolier, animatedly and we think, to a swell and cozy destination.

How to Play Venetian Magic Slot

Get ready for the reel action by selecting a bet for each for the subsequent spin.

This can be done from the bottom left corner of the screen, from the BET window, where you can select £0.25 for the smallest wager, which extrapolates only half of a penny across the 50 lines.

The top bet of £125.00 is the product of £2.50 per each of the paylines, so whatever winning outcome occurs on one or more of these, is going to be multiplied by this amount.

You don't have to opt for either of these amounts, as there are other available amounts in the list.

To set the reels spinning once, hit the theatre mask button in the very center bottom. To the right of it is the Auto Play function, which will cause the reels to spin until you toggle the same button off.

Because Venetian Magic slot doesn't come with any stop limits, such as single win limit or total loss limit, you simply have to mind your balance or select a bet that reflects how want to play the game.

How to Win Venetian Magic Slots

The wild symbol is perhaps the most important symbol, even though it doesn't pay anything.

The reason for its importance is that it triggers a bonus feature and substitutes fro any, even the most lucrative symbols.

On that matter, we stated that the Venetian Magic slots has symbol that pays 40x when five of it land on a payline.

This is the masked character that reminisces a joker and it is followed by a rather gloomy golden mask which pays 30x.

Further down the line yet, the masked lady carries a prize of 20x and the last of the picture symbols pays 8x.

The rest of the symbols are the high cards, which stretch from the ten to the ace and pay from 1.2x to 4x when five of the same fall on a payline.

There is magic about the wild symbol. It appears the image has been taken from a real oil on canvas painting as it is quite vivid. It is even more so because the wild sails to the left from the reel where it had fell initially.

So, with each subsequent spin, there is a wild until there isn't, and each turn comes with a chance that this wild will help to a winning outcome.

There can be more than one wild at the same time. The subsequent spins that were mentioned above are respins, which means, as long as there is a wild, there will respins.

The game can be discovered as a demo. The slots experts at Mascot Gaming have allowed their production to feature on a number of online casinos that offer demo slots to registered players. With a small wager of 0.25 the game can be player with real money for a number of turns, if that may be telling of its capacity to entertain and potentially make bigger payouts.

The city of Venice has been a source of inspiration to painters, poets and political cannivers such as Niccolo Machiavelli, who visited the city once or perhaps more than once. The slot game at hand carries perhaps an aspect of Venice tourists don’t quite get to see, like the aspect of Venetian Snares so many people find bemusing for its own sort of magic. One thing is sure, a 40x won with the highest bet leads to a prize of £5000, not a petty amount.

Claim a welcome offer to play the Venetian Magic slots and discover the game at some of the best online casinos.