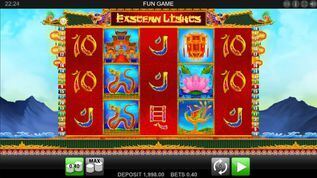 When you think about the fact that Eastern Lights is an Asian-themed slot game, the first thing that comes to your mind is that this slot should include symbols like dragons or geishas that will trick you for a moment.

Of course, this slot didn’t disappoint and it includes such symbols with many interesting features. With Eastern Lights, you have the opportunity to jump to a trip to Asia and learn more about their culture, while having the chance to win some of the highest prizes that are offered there.

Eastern Lights slot is developed by Merkur Gaming and features five reels and 20 paylines. With plenty of help from the Colossal Wilds, this slot keeps the Return To Player under control and at a level that’s considered acceptable for a slot game, of 96.05%.

Moreover, Eastern Lights offers wins up to 600x the stake, or £24.000. The features that this slot has are quite special for such a slot, as they include Magical Lamps Bonus, Colossal Wilds, and Bonus scatters.

The bet ranges from £0.20 and up to £40 per line, and the game’s best combinations are worth 30x the stake each. When the top symbol makes combinations on all lines, the potential for a single spin is up to 600x the stake.

Eastern Lights slot is composed of wild symbols, scatters, free spins, multipliers, all created to make the game more interesting for the players all over the world.

The theme of the Eastern Lights slot reminds on some older Chinese game, but there are some new features for the players.

It has high-quality graphics and the overall look of the game is not usual as the symbols range from decorative fish to women holding paper lanterns, dragons, Phoenix birds, lotus flowers, paper lanterns and Royals.

How To Play Eastern Lights Slot

Eastern Lights slot is very easy to play instead of some other slot games because you don’t need to do manual work in order for the symbols to fall on the reels.

The game does the work by itself by landing the symbols from left to right of the lines or in the centre of the reels. If three symbols fall on the reel, you will win.

One of the symbols that play the main role in the Eastern Lights slot is the Colossal Wild symbol which lands in blocks sized at 2x2, so it gives you four wilds at a time. It can show on the first two reels, the last two reels, or both.

You’ll also notice an Asian lady symbol which represents a bonus symbol. If you land three of them anywhere in the game, you will activate the bonus game.

How To Win Eastern Lights Slot

One of the most interesting things about Eastern Lights slot is that winnings are very easy to form when compared to some other slots. You don’t need the symbols to land from left to right in order to win.

Here, the symbols can appear anywhere, such as in the middle of the reel or only on the right side. Anyway, you’ll win! Get three or more symbols on a line, and you win.

Eastern Lights slot has some interesting bonus features that are worth taking a look at. The most fun feature is the Colossal Wild symbol that we mentioned above. This symbol lands in blocks sized 2x2 and it gives you four wilds at a time.

By landing at least three Bonus symbols anywhere in the game, you will get access to a bonus game called Magical Lamps. The required scatters have to appear on the first, third, and the fifth reel at the same time.

There will be three levels to play where you will get two lamps in each of the levels. All levels have the potential to give more winnings to the players, and each level brings another prize.

Eastern Lights slot is an interesting game with some great features that you might want to try.

With these features and the dynamic gameplay, the game has the potential to give great winnings to the players.

If you are interested in trying this game, claim the welcome bonus and see if the Eastern Lights suits your needs.

Discover the Eastern Lights slot by claiming a welcome offer right from this page and play at top-notch online casinos.

On what devices can I play the Eastern Lights slot?

The Eastern Lights slot uses JS and HTML5 technologies, which makes it compatible with any type of device. That means that you can enjoy this game on your computer or mobile. Eastern Lights mobile is supported on all operating systems and you can access it from your device's browser. In addition, some online casinos have their own apps so you can play the game there as well.

Is Eastern Lights slot available in a demo version?

Yes, you can play Eastern Lights demo version at some of the featured casino sites. Of course, you won't be able to win any prize, but the demo version is a great way of getting to know the game and deciding whether it's worth to wager your money there or not.

What are the min and max bet on the Eastern Lights slot?

You can place your bet starting from £0.20 and up to £40 per spin, and the game’s best combinations are worth 30x the stake each.