A racing theme comes with ten always active paylines and five reels to deliver a speedy adventure on the reels. Low and medium stakes are available to explore the gameplay on the GT World Challenge by Andy Soucek slots, which features a wild and a bonus symbol, as well as feature that is triggered with only one bonus. There are four bonuses that are part of the feature game. 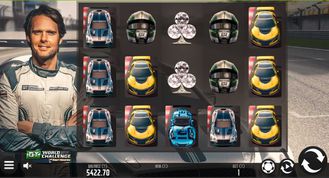 Play the GT World Challenge by Andy Soucek slots for a chance to win up to 12,000 in prizes.

There is a sporting niche in the world of online slots and it naturally invites players looking for the sport they follow. There aren't too many games in this genre that are popular, save perhaps the couple of better-known horse racing slots.

So we approach the GT World Challenge by Andy Soucek slot with a pinch of salt. Is it just a filler, or a clone, or is it a genuine slot primed to provide a real gaming experience.

We shall deduce an honest conclusion at the end, but before that let's consider the basics. The game was produced by MGA Games, a company that works for the Spanish-speaking online gambing market. Even though  GT World Challenge by Andy Soucek is in english, it is about a Spanish-born racer of Formula 2 bolids.

Andy features prominently on the reel set, as he is part of the background. The reel set packs a standard arrangement of three rows and five reels that spin across ten always active paylines.

This high variance game does come with bonus features that are triggered by a non-paying bonus symbol. There are few games that are part of the bonus. The base-game doesn't offer any multipliers, just standard symbol wins. The game's theoretical return to player is just 93.04%

The designers did a job that is close to a bare minimum for an online slot that can be tolerated, if anyone decides to play it. The game's symbols consist of a number of racecars for medium-paying symbols, a couple of racing helmets for the low paying symbols and a club and heart of the card's suits, made of diamonds, for the high-paying symbols.

The musical theme sounds as if taken from a jingle announcing the news. None of the symbols are animated, except the bonus, but somehow, despite all this, the GT World Challenge by Andy Soucek does provide a superficial feeling of a decent visual experience.

How to Play GT World Challenge by Andy Soucek Slot

The controls of this game are found in the bottom right corner of the screen. The big round spin button is the most obvious one. It will send the reels spinning for one time, deducting one bet from the amount that's been selected.

To the left of this button is the autoplay. It makes little sense furnishing a game with everything else, but the option to set limits on the total loss or a single win, so the players can only choose the number of automatic spins from the presets.

As for the bets, these can be selected from the casino chip that is located in the same area. The range of bets on GT World Challenge by Andy Soucek slots is rather sensible, with a penny per payline for the smallest bet of £0.10 and £2.50 per line with the maximum bet of £25.00 per spin.

How to Win GT World Challenge by Andy Soucek Slots

The winning outcomes are paid on one or more of the active paylines and the fewest number of matching symbols that comprises a win is the usual three.

The three cars pay 2.5, 3x and 5x respectively. The wild symbol doesn't pay, however, it acts as a bonus symbol also, triggering three re-spins if it falls in one or more instances on the middle three reels.

There are several games that are part of the bonus feature, which is triggered by three or more of the Bonus symbol, represented by a trophy. The second screen reveals four stages of the bonus feature. With each occurrence of it the player gets taken to the next game. Mostly, it is pick-me game where you need to pick from a number of cars to reveal cash prizes.

Those looking to test the game can do at a very small cost, by playing with the minimum bet of just ten pennies. The game does exist as a demo version, so it is possible to locate it at online casinos that offer demo games to registered players.

This isn’t the most exciting online slot out there. In fact it is one of the more dull games in terms of the graphics design and gameplay. There is one point that may make it appealing to some slots players and that is the feature of the wild symbol and the bonus feature being triggered with just one symbol on three reels.

Claim a welcome offer to discover the GT World Challenge by Andy Soucek slot at one of the online casinos on this page.