The game comes from Crazy Tooth Studio and is released by Microgaming. It has four reels and six rows that spin across 50 always-active paylines. What is more, the payout system can generate winning outcomes that start on the second reel also. The players will find a high volatility game, a theoretical return to player of 96.00% and a maximum payout potential of an appealing 1807x multiplied by the winning bet. 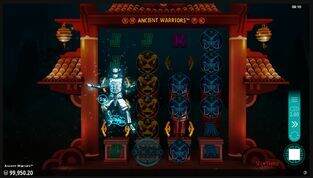 Crazy Tooth Studio seems to be in fighting mode because this is the thrid game that's all about action and settling scores, of sorts. Although sporting different themes, their Fortress Charge and Diamond Force have one thing in common with Ancient Warriors slot - energy, dynamic and action. The game has engaging gameplay that can shake out wins across their See-Thru-Reels system, of up to 1807x your bet.

In consideration of the features, Ancient Warriors comes with a wild symbol and a scatter that can trigger a free spins bonus. To make things even more interestingg, a set of multipliers can add up for a chance to increase the payout potential. Another thing that's worth noting is that the reels act in the same capacity as in any other game, so the See-Thru-Reels bit is just another way of saying, you can see the background in this game, but kudos to Crazy Tooth for being bold and innovative, as always.

In terms of graphic design, the production company have made another unique game. Jus tlike Seven 7s and the games we mentioned above, there is a unique look and feel, and vibe, about Ancient Warriors slots. The setting is a mysterious East Asian temple, decked with pagoda roofs and given depth by a stylized but awesome rendition of a crimson sunset.

The reels arfe quite dynamic. Yes you can see through them, which is cool, and they move in a way that leaves a lingering effect behind the symbols, but it is the 3D warriors that hover above the screen in fighting mode that take the cake for the most impressive piece of design on Ancient Warriors.

In addition to the above, wins are annotated by yet more visual candy on the reel-set and there is a memorable musical theme and sound effects. To say it plainly, play Ancient Warriors to experience one of those games that set the standard in design few notches higher.

How to Play Ancient Warriors Slot

The slots experts at Crazy Tooth Studio have repeated the same arrangement for buttons and settings as in previous releases. The blue strip on the right hand side of the reels is a nice way of tucking everything in a pedantic manner.

The spin button can be found in the bottom right corner of the reels. Pressing it once will send the reels spinning. Another push on this button mid-spin causes the reels to short-stop. Another way to engage in the Ancient Warriors slot is by option for the autoplay mode.

The autoplay button can be found above Spin. Press it to open up the menu for that setting, where you can find a set of automatic spins presets, as well as additional options that let you place controls over the spend while during autoplay.

A double arrow button above autoplay lets you toggle on the fast spins, and above is the button for the bets. The smallest bet of the game is 20p and the maximum bet of £115.00. The paytable and few other menu options can be accessed by selecting the three-line button on the top.

How to Win Ancient Warriors Slots

Winning outcomes in the game are made with at least three matching symbols. Four symbols constitute optimal wins, however, it is quite possible to get multiple wins with various three or four of a kind symbols.

What's quite interesting about Ancient Warriors slot is that the game repeats a same principle seen in Diamond Force and probably other games by Crazy Tooth. Here, both the low-paying and high-paying symbols can pay the same amounts, regardless of the symbol kind.

Three royal cards' symbols pay 0.3x and four pay 0.7x. Now this other bit isn't that amazing, it's more shocking, because the high-paying class of symbols can bring you 0.5x for three and 1.5x for four.

So what's the deal? Why such low payouts? Probably because there is something that the paytable doesn't tell us about, such as the frequency of the wins and the bonus feature hit rate.

Another caveat for the game is that the wilds aren't easy to get. Wilds can only form when the symbol showing set of four Chinese symbols falls stacked between three and five rows.

Another extra feature are the stacked multipliers. These come at random and show values that start at 2x and end at 10x to multiply the bet amount that triggered the wins.

And last but not least, there is the free spins bonus which is triggered with three scatters stop on the reels. In the event the players get five spins and if any of the extra features above trigger, the wilds and the multipliers, they become sticky until the spins are over.

The free spins bonus doesn't quite retrigger, however, it becomes extended by one spin for each scatter symbol that stops on the reels.

Online casinos that pick up on this game can also offer it as a free play demo slot. So, whoever wants to try the game with free credits is able to do so. Some of the casino reviews on SlotsWise point to casinos with practice play more, especially the casinos that are highlighted on this page.

This is another amazing game. It is strange but amazing nevertheless. It looks like it is a slot game that one has to play and see what’s up with those strange payouts, and the high volatility and the frequent winning outcomes.

Discover the Ancient Warriors slots by claiming a welcome offer right from this page and play at top-rated online casinos.

Legend Of The 5 Ninjas

The game comes with a set of extra features, such as a two-way pay system, wild multipliers of up to 10x and there is a free spins bonus that includes both of the features above.

What is the RTP and Variance of Ancient Warriors?

Players will be met by a math model that has high variance, which means a big win potential exists, however, most of the winning outcomes tend to be low to moderate. The Ancient Warriors RTP is 96.00%

Where can I play Ancient Warriors slot?

The game is available at a number of online casinos that have been reviewed for licensing, regulation and compliance details. These can be found on the Ancient Warriors review page.