Follow Lola, the mysterious agent sent on a mission called Assassin Moon. Watch her as she aims to hit her target on a pale moonlight, and at the same time, win you the attractive jackpot prize. This 5-reel spy adventure comes from Microgaming in partnership with Triple Edge Studios. Delve deeper into the story behind this mission in our review below. 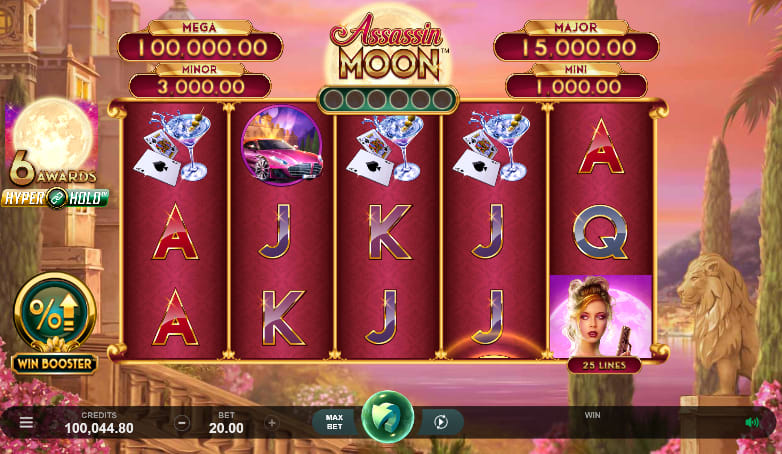 An attractive and mysterious secret agent is sent on a mission to Monte Carlo with one goal on her mind-win you the big prize. Assassin Moon is a slot game that perfectly blends the elements of an innovative game release. From its design to the storytelling elements and features that are not typical for online slots, this game is worth the spin. The adventure is supported with 5x3 reels 25 paylines and a win booster to help in your game strategy. Along with the HyperHold bonus game, you can win up to 5,000x your bet. Let’s see what this game has to offer in more detail.

The collaboration between Microgaming and Triple Edge Studio resulted in the launch of Assassin Moon slot game – one of the exclusive releases for Microgaming’s casinos. This is a story about a beautiful female bounty hunter on a mission to catch her subject of interest. The minimum stake here is £0.10/spin which goes up to a maximum of £20/spin. Landing 3 or more matching symbols across the paylines will result with a win. On your left side, you’ll notice the Win Booster option which will maximise your stake up to £50/spin, giving you a better chance for a big win. You can activate the Autoplay feature and adjust the desired number of autospins.

In Assassin Moon slot game, there’s plenty of action regarding bonus features. The highlights include a classic free spins round, stacked wilds, the HyperHold feature and the Win Booster. Lola, the spy lady, is the wild symbol, and she substitutes all symbols except scatters and moon symbols. She also appears in a stacked formation and can fill the entire reel. If you land 3, 4 or 5 wilds, they will pay 2.5x, 20 or 500x your bet. Moreover, Triple Edge Studios have decided to spice the gameplay, as they set the maximum win of up to 12,500x your bet if Lola appears on all 5 reels as a stacked symbol. Even though it sounds like Mission Impossible, who knows-maybe you’ll be the one on the right place at the right time.

The creators of Assassin Moon slot game leaned towards the luxurious side of the spy theme. From the very start, you’ll get the feel that Lola knows what she’s doing, in all the lavishness and vanity that carries the interface. The background music sounds like it is part of a film music composers’ playlist. The rhythm changes and intensifies every time you land a winning combo or expect that very last symbol to land on the reels. Occasionally, you’ll hear the sensual voice of Lola which will guide you during the rounds. Her phrases might look a bit cliché, but we admit that they are a perfect addition to the theme.

On the velvety grid, you’ll notice A to J royal symbols alongside pair of dices, playing cards, Martini, pink sportscar and casino chips as the scatter symbol. The male figure that represents Lola’s target is the most rewarding symbol, valued at potential 25x your bet if you land 5 on a payline. As we mentioned previously, Lola is the wild symbol, and you can also see her in a stacked formation. If you’re lucky enough to occupy the reels with stacked wilds, you’ll win an impressive 12,500 your bet.

This thrilling slot game comes with 96,08% in RTP ( Return to Player ), which is considered as an average industry ratio. This percentage rises slightly to 96,3% if you activate the Win Booster feature. The hit frequency of the Assassin Moon slot is around 30,5%, meaning that winning combos make up just less than a third of the total number of spins. In this RTP, Variance and Volatility guide, you can read more about different math models and variances in online slots.

Assassin Moon comes with а lot of action accompanied by many interesting in-game features. We’ve mentioned the Win Booster, as a way to maximise your chances to win and scale that RTP. The stacked wilds are both lucrative and incorporated well in the gameplay. The full moon gives a hint about the HyperHold feature where every symbol counts. On the other hand, 3 scatter symbols will activate the free spins round. Now, let’s go through the details about the features incorporated in the Assassin Moon slot.

Watch out for the pale moonlight symbol on the reels, as landing 6 of them will trigger the HyperHold bonus. In this round, you have a chance to win big prizes and activate one of the four static jackpots. The feature starts with 3 free spins, while the triggered moon symbols from the base round become sticky. Each position that is not occupied with a moon symbol will spin individually. Every additional moon symbol landed on those positions will reset the respins counter to 3 spins.

Clicking on the Win Booster button will add extra HyperHold bonus symbols to the reels, maximising your chances to trigger the HyperHold feature. The activation of the Win Booster increases your stake by 2.5x.

Casino chips represent the scatter symbols in Assassin Moon. If you land 3 of them on reels 2,3 and 4, you’ll activate the free spins round and start with 10 free spins. Throughout this round, the middle three reels combine and create a 3x3 jumbo block. Landing a jumbo block scatter symbol will award you an additional 10 free spins. Moreover, you can trigger the HyperHold feature during this round, which is quite exciting.

You can play and adjust Assassin Moon slot game on your smartphone or any other mobile device you own. The responsive interface and adaptive design enable smooth and seamless gameplay, regardless of the devices’ type or operating system.

Is there a Jackpot on Assassin Moon Slot?

We’ve mentioned the moon symbols from the HyperHold feature. Well, these symbols come with a cash value of between 1.5x and 20x your stake, or with a Mini, Minor or Major Jackpot attached to them. When you run out of respins, the moons’ values are added to your final score. If you manage to fill every position on the reels with moon symbols, you’ll land the Mega Jackpot. Here are the payout values of the 4 jackpots:

Microgaming is not afraid to experiment with different themes and subject for their latest slot releases. It’s worth noting that Assassin Moon is their first slot game featuring the HyperHold mechanic, which has proved to be a smashing hit on gaming forums and communities. If you like to explore other popular mechanics used by this developer, check out Juicy Joker: Mega Moolah. This slot is another addition to their Mega Moola progressive slot collection which can deliver a maximum of 500x your bet in the base game. Next, we have the deadmau5 slot, for those that enjoy in branded slots based on famous DJs and producers, wrapped up in flashing lights and neon graphics. On a more festive note, you’ll surely find A Tale of Elves interesting in terms of its design and a potential win of up to 10,000x your bet. No matter the season or occasion, festive titles are known to offer generous and rewarding payout systems.

If you’re a fan of secretive, adventurous action play, then Assassin Moon is the perfect choice for you. Here, you are the centre of attention right next to Lola and her mission to catch the bad guy. Considering that Lola’s first comment at the beginning of the game is “First stop, Monte Carlo”, gives us a clue that this might be the first of the upcoming Assassin Moon slot series. If we’re right, we look forward to their release. Visuals and in-game features are impressive, classy and engaging to the point that you’ll forget that this is just another online slot game. In the end, this slot game is a new surprise from Microgaming and Triple Edge Studios, as it spins the familiar features and bonuses on an imaginative and innovative way.

Discover the Assassin Moon slot by claiming a welcome offer right from this page and play at top-notch online casinos.