Cash of Kingdoms is a Microgaming medieval-themed slot, available at many of the casinos that are featured on SlotsWize. Check out a full-blown slot game with knights and jousting and a small buy-in per spin of just 15p. The game's 15 paylines work on a reel-set of five reels and three rows, in a highly-animated adventure that has a hefty jackpot prize of 1,000,000  and a maximum wager per spin of £480. 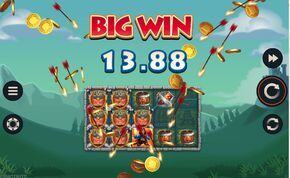 The Medieval period is an inspiration for many, so we have seen quite a few medieval-themed slots in the past. Some of them depict actual events and characters from the Middle Ages, other slots are based of legends and feature mythological heroes from that period, but there are also games that are loosely based on a medieval theme, without depicting any specific events or characters. We have an example of that here – Cash Of Kingdoms slots. This is a Microgaming slot that was released towards the end of 2018 and it gained popularity quickly.

Cash of Kingdoms slot is a game that was developed by Slingshot Studios on behalf of Microgaming. There are plenty of games that have been developed by smaller studios but are provided via the Microgaming platform.

You will see mountains and castles in the background, and the objects and characters you can see as symbols are typical representations of medieval life. The game is available on mobile devices, so you can play it regardless of your location, as long you have a stable internet connection. Of course, it is also possible to play Cash of Kingdoms slot on a desktop computer, or a laptop as well.

The music suits the ambiance and if you’ve ever seen a medieval film, it’ll sound familiar to you. All in all, the game is pretty good, but in terms of visual design, as well as sound effects, and all aspects of the gameplay.

How To Play Cash Of Kingdoms Slot

Before you start spinning the reels of Cash of Kingdoms slot you will need to select your stake. You can do so by clicking on the button that looks like a casino chip, placed to the left of the bottom reel.

The game features five reels, three rows and a total of 15 paylines. You will need to place a wager of at least one penny per payline, so the minimum stake per spin amounts to 15p.

However, you can increase your wager up to an amount of £480 and we have to say that out of the many online slots we’ve reviewed, there are perhaps only few games that feature a maximum limit which is that high.

We would advise you to be cautious if you intend to wager £480 per spin, as it is generally not recommended to place a stake that’s higher than 1% or 2% of your total stake. The maximum is bet when you set your coin size to one quid and the number of coins per payline to 32.

Of course, there are plenty of options between 15p and £480 and you are free to choose your wager. The game also features an ‘auto play’ button and you can set the reels to spin up to 100 times without your additional intervention. Of course, if you like, you can always cancel the auto play and proceed manually.

How To Win Cash Of Kingdoms

As we already mentioned this game comes with 15 paylines and each payline is active during every spin. A winning combination is triggered if at least three instances of the same symbol are arranged across a payline, starting from the leftmost towards the rightmost reel, not the other way around.

The minimum amount that you can win in this game is two times the amount you’ve wagered per payline. The sword on a shield is the most valuable of the five symbols of lower value and it pays 35 coins for five symbols across a payline.

The highest prize in the main game is 150 coins, awarded for five kings across a payline. The wild is the first special symbol and it can replace all symbols except for the scatter. The wild can appear on the second, third and fourth reels.

The wild symbols can be stacked on the second and the fourth reel, but during free spins they are super stacked.

In addition to the standard and stacked reels, there are also Invading Wilds which appear on the second and the fourth reel but spread to the adjacent reel, also turning it into a wild. This feature can also appear during Free Spins.

The scatter symbol is the next special symbol and it can appear on the three middle reels. Three scatters trigger ten Free Spins and you will also get your wager doubled.

Our Cash Of Kingdoms Review

This game was initially presented at the ICE Conference in 2018 and everybody at Microgaming were pretty excited when it was released. Needless to say, players liked it too.

So, if you’re looking to play Cash of Kingdoms slot, register with one of our partner sites, claim your bonus and then you can play this and many other slots!

The Story of Alexander II