Crime slotplay at its most basic, but this is a fast-paced three-reeler that vaults ahead of the competition thanks to a clever and varied bonus game

On the face of it, Cops and Robbers slots is a fairly standard three-reel one-paylinegame, casting you in the role of a robber plotting the perfect money grab. The main screen is incredibly busy, with the three reels swamped by a flood of information. Thankfully, the main game is fairly straightforward to grasp, so the somewhat confusing interface doesn't get in the way of the game itself. On the face of it, you're trying to bag the 500x Jackpot. In reality, though, this game is essentially about the Bonus Game.

As we have already mentioned in the opening section, Cops and Robbers slots is a five-reel, 25paylinecrime-based game with an added humour to the subject. The theme is not that obvious aside from the game logo at the top of the reel set and some of the symbols on the reels.

When the symbols on the reels of Cops and Robbers slots are in question, they come in two groups of low value and high value. The low values include five standard playing card symbols – 10, J, Q, K and A – in a different colour. All of the low-value symbols award you for landing combinations of three, four and five matching symbols on the reels.

The group of high-value symbols are all theme-related and include a female officer, a Bobby, a judge and a police car. The two police officers award you with payouts for landing combinations of three, four and five identical symbols, while the remaining two also pay out for two-of-a-kind.

A bulldog is used for a Wild symbol which substitutes for all symbols except the scatters. Wins containing a wild pay double the standard win. The Cops and Robbers logo, a safe and a police light are three scatter symbols that trigger unique bonuses. 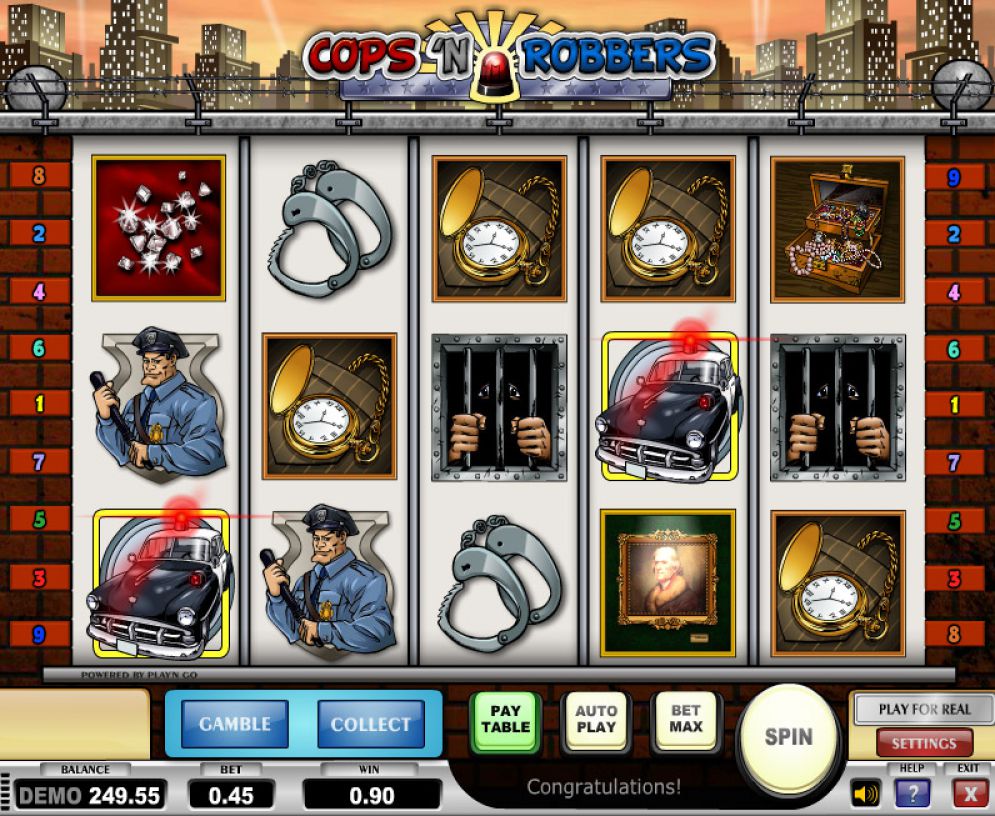 How To Play Cops And Robbers Slots

Operating Cops and Robbers slots is quite straightforward since all you need to set before pressing START is your stake for the spin. By pressing the CHANGE STAKE button, you can select from the available options to play on apayline. The limits for the bet per spin in Cops and Robbers have been set at £0.05 and £200.00, which makes this game suitable for both low rollers and high rollers.

If you want to enjoy the gameplay without pressing START after each round, go for the AUTOPLAY button. It gives you the chance to spin the reels automatically for a certain number of rounds.

How To Win Cops And Robbers

Winning payouts in Cops and Robbers slots are awarded for landing combinations of identical symbols across apayline.

Triggered by landing three, four or five safe scatters, all you need to do during this round is pick one of the symbols to reveal your prize.

The blue police lights are the key to this round and you need to land at least three of them. Depending on the number of triggering scatters, you’ll get 15, 25 or 100 free spins. All wins during the spins will get a 5x multiplier and you can re-trigger the spins until you reach a limit of 210.

Landing at least three of the Cops and Robbers logo scatters will activate this bonus feature. You’ll be presented with a board game filled with multipliers and you must throw dice to move. Each of your moves will land you on a certain multiplier which will cumulatively increase your prize. However, if the cop that’s after youovertakesyou, you will appear in an ID parade. If you get away, you can go back to the board for some more moves, but if you are picked, the round is over.

Our Cops And Robbers Slot Review

Cops and Robbershasgraphics that look dated, but its bonus features make up for any deficiencies, so you should most certainly give it a try.

So, choose your welcome package from the online casinos promoted here at Slotswise and spin for the chance to win excellent real money rewards on Cops and Robbers!