Crazy Tooth Studio based in Reno, NV are releasing the Diamond Force slots on Microgaming's Quickfire platform. This time around we get a superhero action slot with 1024 two-way-win payout mechanism that triggers the Team-Up feature. In it, the reels are merged together to spin as one symbol. The game offers multipliers of up to 5x and a high variance action on the reels. 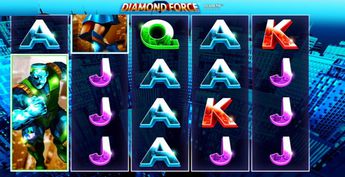 With the game at hand, we have a seemingly standard online slot with five reels and four rows playing across two-way-pay with 1024 lines. An addition to this payout mechanism is that three or four symbol wins can occur without having to start on the leftmost and rightmost reels.

Diamond Force slot is a superhero-themed game made by Crazy Tooth Studios based in Reno, Nevada. The company has released several online slots on Microgaming's Quickfire platform, some of which have brought a fresh take on the gameplay and on the definition of a slot/iGaming game.

The payouts are displayed according to the number of credits that have been won, per the symbol win amount on the current bet multiplier. Additionally, the Diamond Force slot has the new Team-up reels, which is basically symbols combining to create new reels.

As we can see thus far, the game brings a couple of new things to the table, and this is big news in the world of online slots where new things don't come too often. Nevertheless, everything is automated so there is no need to really 'get it' in order to enjoy the game.

The slots and design experts at Crazy Tooth Studios have made a superhero-themed game according to their own imaginary superhero universe. You aren’t going to recognize any character from the movies or comics, but nevertheless, these are fully-developed roles and very well drawn to create the impression of a comic book style setting.

Diamond Force slot has an engaging display of events. Whenever a win occurs, the event is marked by a flurry of light and teeming reels and symbols. Big wins are celebrated in a way that is festive, to say the least. What is more, the bonus feature has some moving parts of its own and there is a musical theme that fills in the ambience with the soundtrack that this game deserves.

How to Play Diamond Force Slot

Your adventure with the Diamond Force slot heroes can begin with the push of the spin button, which is a big round button located in the bottom right corner of the screen.

All of the game's buttons can be found on the right-hand side of the reel-set. This is where you can configure the autoplay mode, select the bets and view the menu and the paytable.

To choose the bet before you make the first spin on Diamond Force slot, click or tap on the coin stack button and select the wager amount in the list that appears. The smallest bet that is available in the game is ten pennies while the maximum bet is £10.00 per spin.

If you want, you can play Diamond Force slot hands-free by selecting the double arrow symbol which is above the spin button. Select the number of automatic spins from the presets and press play. Additional options can be configured also.

And last but not least, if you wish to view the menu and the paytable, for the symbol payouts and bonus feature information, press the three dash button on top of the other buttons.

How to Win Diamond Force Slot

Besides the payouts, the defining feature of the game is the Team Up Reels engine. In the base game, the superhero symbols come expanded three positions on the reel.

When three or more symbols stop on the reels, they will join together and that reels will spin as one of the heroes.

Furthermore, each of the superheroes has its own reel-modifying features.

Stacked symbols pay the same amount 3.33x on the winning bet for five, four and three of the same, which, come to think of it, isn't such a bad thing, considering how usually wide the difference is between five symbol wins and three symbol wins.

Also, the bonus/scatter symbol is fully stacked and can stop on the fifth reel only.

The game has a bonus feature called Team-up Bonus Spins and it triggers when a full stack scatter symbol stops on the reels along with any two or more fully stacked feature symbols.

In the event, three spins are awarded plus additional spins for any additional bonus symbols that stop on the fifth reel. In the event, a random number of spins are added that can be either +1, +2 or +3 while the multipliers can either be 2x, 3x or 5x.

Crazy Tooth Studios have released nearly all of their online slots as free play demos at online casinos that host demo games. We don’t see a reason why they wouldn’t release this game as well. Possibly following the promotional release period.

The game at hand has a high variance but doesn't have the huge maximum exposure that usually matches the win potentials. How can we speculate in this regard - it must be all about the expanding symbols. While the multipliers aren't huge, a 5x on the win surely makes a difference.

Discover the Diamond Force slot by claiming a welcome offer right from this page and play at top-rated online casinos.

What are Team-Up Bonus Spins?

Team-up Bonus Spins is a bonus feature in Diamond Force slot that is triggered when three stacked scatter symbols land on the reels. In the event, three spins are awarded plus additional spins for any additional bonus symbols that stop on the fifth reel. Then, a random number of spins are added that can be either +1, +2 or +3 while the multipliers can either be 2x, 3x or 5x.

What is the Diamond Force slot's RTP?

The theoretical Return to Player (RTP) of Diamond Force is 96.53%. This percentage is pretty high compared to most of the slots. 35.22% of the RTP comes in the base game and 34.37% comes in the Team-Up feature. In addition, 26.94% comes from the Team-Up Bonus Spins feature.

Is there a progressive jackpot in Diamond Force slot?

There is no progressive or fixed jackpot on Diamond Force slot, but maximum payout that can be won in this game is pretty great on its own. It’s stated to be 13,175x your stake, but you need to be very lucky with the multipliers to win some huge prize with these symbols.