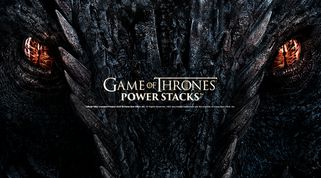 The Game of Thrones online slot was released in 2014 at the peak of the popular television show, but it didn't become popular with the slots playing public.

Microgaming's 243 ways to win game offered the standard five reels and even four free spins modes in which the players could choose a trade-off between the number of free spins and the multiplier amount.

It is safe to say that this game went under the radar and many online casinos first picked it up and then left it out of their slots rosters. The reason may have probably been due characters from the series not being preset as symbols on the paytable, so there was no way the players would relate to the game just by knowing that it has Game of Thrones slot in the title.

This wouldn't be the case with Game of Thrones Power Stacks slot. It is going to be another Microgaming release while the developers work has been given to the slots experts at Slingshot Studios, who have done a marvellous job with A Dark Matter slot.

From what we know, Game of Thrones Power Stacks slot will feature five reels and four rows. The game is already being built and glimpses of it were showcased at ICE 2020 in London.

Both slots players and fans of the show can rest assured that this is going to be a full-blown reel adventure that packs the familiar Game of Thrones look and feel, as well as character symbols alongside the coats of arms.

And what is more, Game of Thrones Power Stacks slots is a jackpot affair that offers four tier jackpots, which are going to be in-game progressive.

The game is slated for release in early-mid 2020 and we are looking forward to every piece of news that emerges about it.