Magic of Sahara comes by way of collaborating of All41 and Microgaming. It has three rows, five reels and 9 always active paylines. The game's theoretical return to player outcome is 95.29% and there is medium volatility in consideration of the wins. Land three scatters in order to trigger the free spins, which come with x2 multipliers, or more. With symbol wins to the tune of 2,222x on the line bet, there isn't an awful lot to be won, at once, but playing more may lead the way to more. 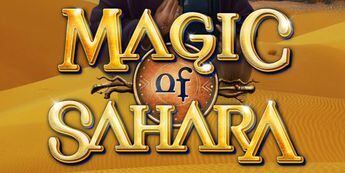 See where the nomadic route may take you, by way of the free spins bonus and the 2,222x wins when you play the Magic of Sahara slot.

The Sahara is an enigma. Once a thriving oasis, today a barren landscape of sand, and nothing but sand. Who know what it once hid underneath, but whatever there had been, it may become unearthed if the winds shift in the favorable direction. Welcome the Magic of Sahara slot, a game of five reels, three rows free spins and stacked wilds. Yes, despite the unbearability of the scorching sun, the game does offer marvelous gameplay, excellent prizes and the company of the nomadic Touaregs who follow you on this adventure.

The slots experts behind the Magic of Sahara slot are All41 Studios, who are an affiliate of the famed and always on the cutting edge Microgaming. Thus we know that this is a swell online slot that will deliver the fun, the entertainment and the thrill of it all. With a range of available bets which isn't going to rip anyone's pockets, this online slot will find its place in the 'favorites' list of many players. Whether the theme will feel at home with most is another thing, but players be certain that this could become one of those games that enchants.

So let’s take a look at some further details regarding setting up for the play and the bonus features and the kickers that exist in this slot game, before finishing with the best part about claiming a welcome bonus.

How to Play Magic of Sahara

The game has three rows, five reels and nine always active paylines. This arrangement has been provided with a good range of bets that aren't terribly high, while leaving enough heft at the upper-limit bets to provide some players with the high-stakes action they might enjoy. To set the game's bet per spin select the coin stack icon located to the left of the spin button. This leads to bets that start from £0.09 per spin and end with the game's highest bet of £45.00. Once the bet has been set, use the centrally-placed spin button, which is found just underneath the middle, third reel.

Few other buttons may come in useful in the gaming experience. Magic of Sahara slot offers an autoplay button which allows the players to set a number of automatic spins which will allow for kicking back and relaxing while the reels turn on their own for the specified number of times.

The paytable is a very useful option that lets the players view the pays that are associated with each individual symbol and for the number of instances it appears on a payline to provide a win. The Magic of Sahara paytable also offers a look into the bonus features and how these are triggered, as well as gameplay information and rules. The players can do without this button, but sometimes it helps to see how much a certain symbol is worth.

How to Win Magic of Sahara Slots

The game has a set of high-paying symbols represented by the Touaregs and a set of low-paying symbol that are represented by the set of stylized high cards that range from ten to the ace. The game's most valuable prize is at 2,222x multiplied by the line bet. There are other symbol pays that are quite decent, and those that help sustain the balance, towards the possible big and medium wins.

One big boon for the players regarding the Wild symbol is their ability to become Super Stacked Wilds, but only on reels three and four, which nevertheless increases the odds of there being a winning combination.

Of the bonus features we have a free spins bonus that can be triggered by the landing of the scatter symbols. Land three, four or five of these symbols to get the corresponding number of free spins, which is capped to 34. Another way of triggering this bonus is by collecting the tokens, which happens automatically throughout the gameplay. 25 tokens will trigger 25 spins. What is more. the Magic of Sahara bonus feature comes with multipliers, so there is a good chance to double or triple the winnings.

The game's return to player theoretical outcome is even throughout the game, except for the free spins bonus during which it may become a bit higher. The overall Magic of Sahara RTP is 95.29%.

Our Magic of Sahara Slots Review

The game has a unique theme, that is for sure. We’ve seen Sahara as a staging ground on many occasions, but on Ancient Egypt-themed slots. Here we have the nomadic tribe called the Touaregs as the theme of the game, besides their ancestral home which they enjoy roaming. At any rate, the gameplay is decent, the winnings could be higher, but with the free spins and the multipliers, the players are looking at swell possibilities.

Play Magic of Sahara when you claim a welcome bonus to one of the casinos on this page.