The simplicity of the title reflects the simplicity of the gameplay, which comes by way of three rows and five reels. These spin across 25 fixed paylines that can take bets of as little as one penny per line or 25p per spin. Winning outcomes are made for three matching symbols, or more, and the theoretical return to player (RTP) of Noble Sky is 96.12%. 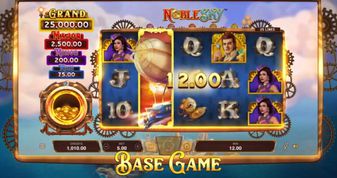 Microgaming and Neon Valley Studios have gone to the world of fiction for their most recent jackpot release called Noble Sky slot. The game takes place in the blue heavens where the cogs and wheels of a steampunk machine are whirring in place to keep the thing afloat. The amusing concept is paired with a set of specifications that can spell out a potentially rewarding take on the house, with winnings of up to 5000x your bet.

Players who are into jackpot slots will find this to be one of the more amusing games. Those who play Noble Sky will be playing for a chance to win one of four instant jackpot prizes, however, big wins are also possible in the base game and during the bonus feature which is a respins game where the player can land win multipliers. All in all, Nobly Sky seems primed for engaging reel adventure.

The question we had to ask of ourselves in regards to the graphic design was, is this a typical Microgaming produced/backed slot? Well, the game has some semblance to Mega Moolah: Atlantean Treasures and perhaps to in the general look and feel of the game and there is definitely overlapping elements with the Mega Moolah Fortunium Gold slot. Nevertheless, the graphic design is quite fresh and engaging and a lot of the symbols are nicely animated.

Noble Sky slots belongs to a class of steampunk-inspired slots where the theme is all about the mechanics and hydraulics, which are usually put together in order to comprise a grand marvel of engineering. In addition to the gameplay details, those who play Noble Sky slot can enjoy a brilliant musical theme, made just for this game.

How to Play Noble Sky Slot

Playing the game requires setting up for the gameplay ahead of the potential jackpot prizes. The setup is quite straightforward as Neon Valley Studios has kept things plain and simple regarding the controls and buttons on the screen.

The play button is the big orange trapeze located in the middle section underneath the reel set. Pressing this button once sends the reels for a spin and deducts the active bet amount one time from the balance. That amount is shown in the window that states BET.

To change the bet pers pin, Noble Sky slot has a set of plus and minus buttons that need to be pushed until you've arrived at the concrete amount. The bets range between 25p per spin and £25 for the maximum amount, which is one pound per payline.

How to Win Noble Sky Slots

Landing wins in this game requires three or more symbols of the same kind to land on one of the paylines. In terms of payouts, you can land multiple wins across the layout with the help of the floating dirigible wild symbol.

In terms of symbol values, Noble Sky slot has few that are worth noting and these are the distinguished ladies and the gentleman that ride aboard the craft. Their symbols pay between 10x and 20x for five of a kind. Not at all bad, however, the card symbols are qite low in comparison, so a fine balance is struck because the game has a hit frequency of an amazing 45% - that's nearly one in two spins overall.

The game is quite simple when it comes to bonus features. Players can play for a chance to win a jackpot prize during the Vault Bonus. The way it works is golden coins are collected inside the golden pot. When enough coins have been collected, there is a pick-me bonus with 12 coins where you get to match three corresponding jackpot colors. The major prize is 5000x your bet.

The other feature is the respins which triggers when the dirigible covers an entire reel. When it does, the thing starts moving from right to left until it clears from the reel set. Each spin results in a win multiplier of 1x, 2x, 3x, 5x and 10x. Sadly, you can get only as many as five respins from a single bonus respins event.

Players can try all of the game’s features and even land a faux jackpot prize by playing the game as a free play demo slot. This is possible with free credits when you select the game from the list of Microgaming games and play it in practice play mode.

We don’t know what the biggest potential payout from a single spin that is not one of the jackpot prizes. 5000x is for the biggest jackpot, but it is quite possible for the game to reach 500x or more, during the respins by getting high-paying symbol wins of four or more with the 10x multiplier. Thankfully, these events are not that rare.

Discover the Noble Sky slots by claiming a welcome offer right from this page and play at top-rated online casinos.

The Tablet of Amun Ra