Take a ride into the calm, blue Caribbean seas in the new pirate reel adventure from Microgaming and Gong Gaming. The Pirate’s Quest slot comes with a Multiplier Island Map feature, plus wilds symbols and a Free Spins feature that can be re-triggered without limits. In total, you can win 2,000x the stake from a single spin. Find out more in our full Pirate’s Quest Slot Review. 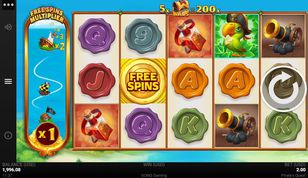 Pirate’s Quest is a five-reel slot machine with 25 paylines. It’s developed by Microgaming in collaboration with Gong Gaming Technologies. This is not their first collaborative release, as the previous one was the Skulls Heap slot. 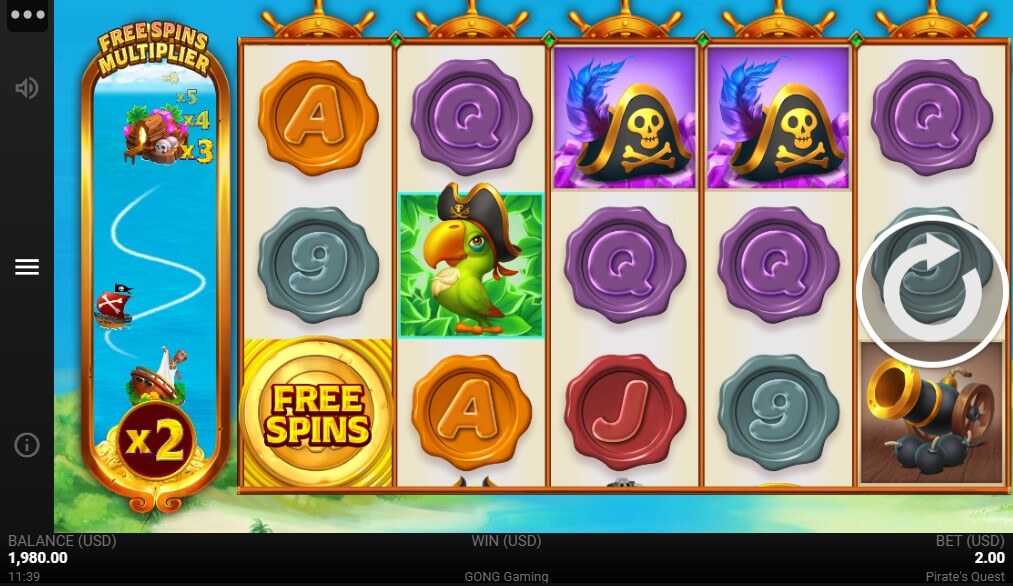 You can join this pirate adventure and play for a chance to win up to 2,000x the stake, thanks to the Multiplier Island Map and the Free Spins feature. If you want to learn more about this highly volatile game, carry on reading our Pirate’s Quest Slot Review.

There is another quest on the slots scene and this time it involves pirates. Created by Microgaming and Gong Gaming Technologies, the Pirate’s Quest slot takes us on a pirate reel adventure with cartoon-styled pirates, in search of hidden treasures.

The Pirate’s Quest slot plays on 5 reels, 3 rows, and 25 fixed paylines. Winning combinations are formed by landing three or more matching symbols from left to right. You can play this game at stake levels from £0.25 to £125 per spin. At most, the game can deliver 2,000x stake payouts.

To win the biggest prizes in the Pirate’s Quest slot game, you have to increase the multiplier up to 10x on the Island Map and trigger the Free Spins feature. We’ll explain these features below in the bonus section of our Pirate’s Quest Slot Review. 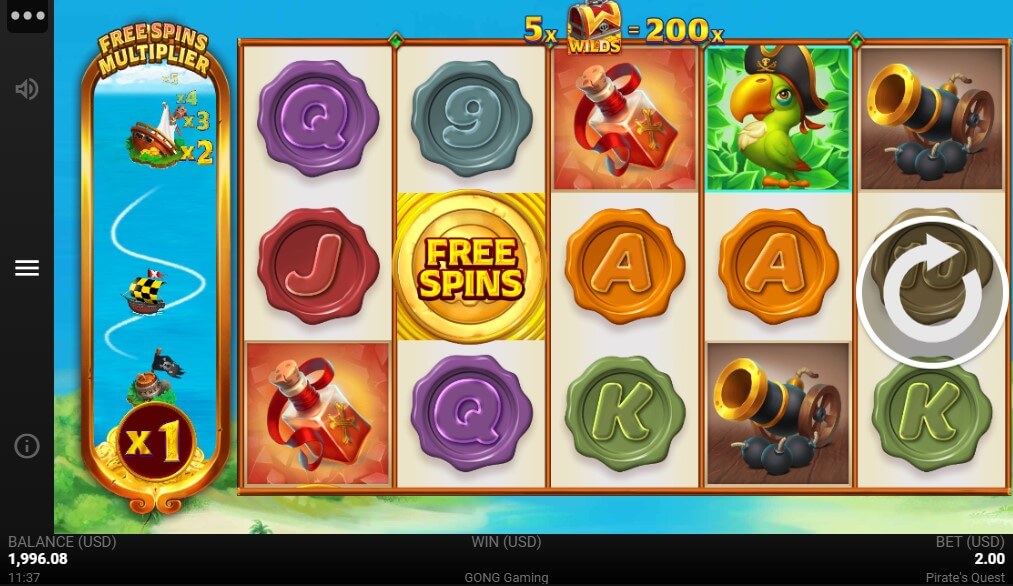 As its title suggests, the theme of the Pirate’s Quest slot is pirates. The reels are placed on a beautiful background showing the Caribbean sea. On the left side of the reels, there’s a Multiplier Island Map with a small ship that travels towards the island.

Overall, the Pirate’s Quest slot has a beautiful design with quality graphics. The symbols are cartoon-styled, with attention to details. While you spin, a jolly soundtrack will play in the background, adding to the whole pirate experience.

The paytable consists of low and high-paying symbols. The low-value symbols are the well-known Royals (9, 10, J, Q, K, and A), which reward up to 8x the stake for five in a payline. The high-value symbols are designed as a red bottle, a pirate hat, a cannon, a green parrot, and a pirate.

The Pirate is the top-paying standard symbol that rewards up to 40x the stake for 5 in a payline. There’s also a treasure chest symbol which is the wild symbol and it substitutes for all standard symbols.

In addition, ship symbols appear in the base game but they don’t pay rewards, as they’re immediately transferred to the Multiplier Island Map. And finally, the Free Spin symbol is the scatter that triggers the Free Spins feature.

The RTP percentage of the Pirate’s Quest slot is 96% which is the industry standard. Moreover, the game’s variance is high, so you’ll land bigger but less frequent winning combinations. There’s a chance to win up to 2,000x the stake, thanks to the bonus features.

If you want to learn more about RTP and variance models in online slots, check our Variance, Volatility and RTP guide. 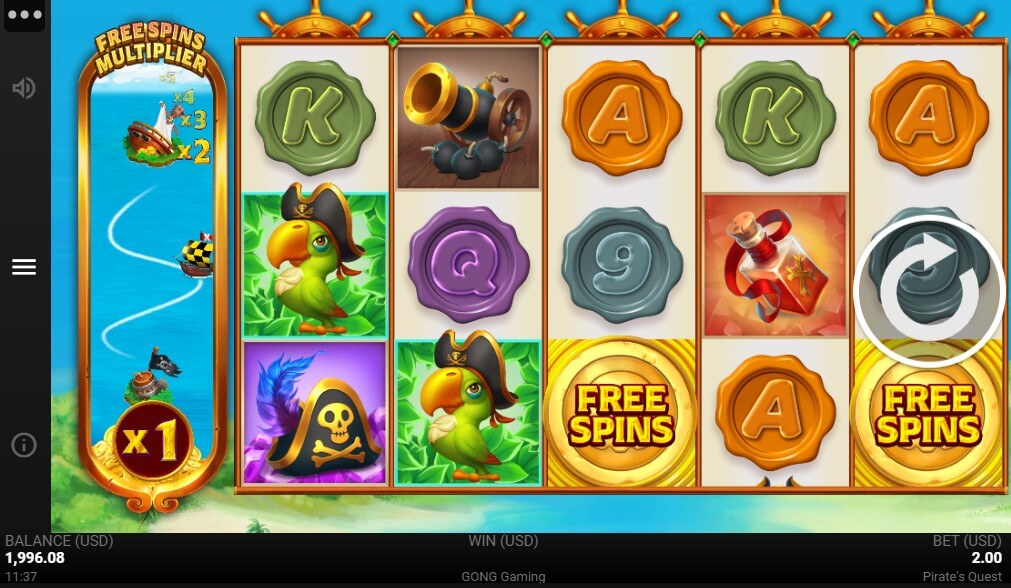 Pirate’s Quest is a simple slot with more dynamic gameplay. What makes this game unique is the Multiplier Island Map where you collect ship symbols and increase the win multiplier. Trigger the free spins and the current multiplier will apply to all bonus wins.

Moreover, the wild symbol in the Pirate’s Quest slot is quite profitable as it can pay up to 200x the stake for 5 in a payline. In addition, the wild substitutes for all regular symbols to help you complete a winning line.

If you look on the left side of the reels, you’ll notice an island map. In addition, you’ll also notice colourful pirate ship symbols appearing on the reels while you spin. When landed, these symbols won’t pay you anything, but they will be collected on the island map. 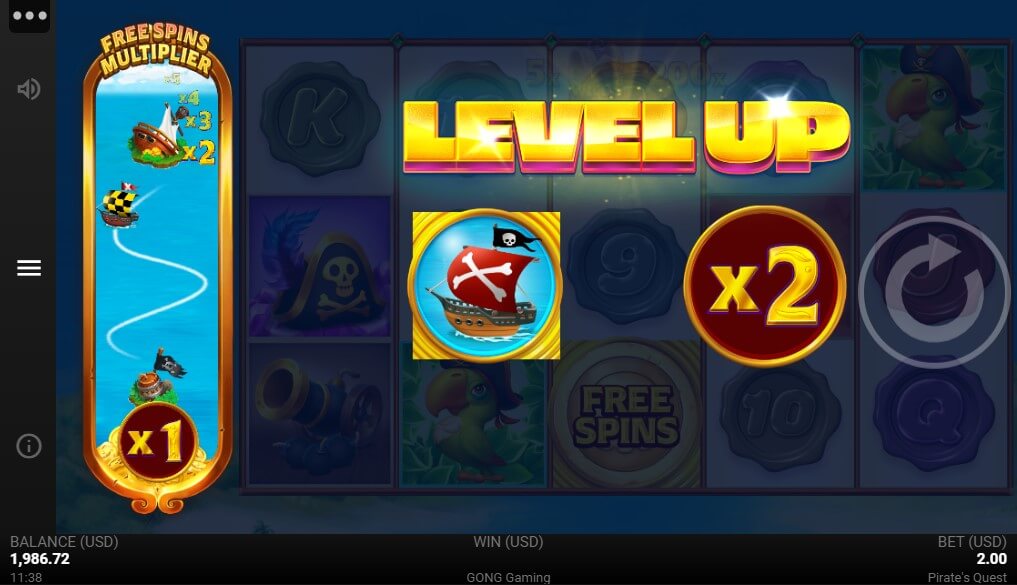 When you collect the required number of ship symbols on the map, the win multiplier will increase. Every time the multiplier increases, the ship and the island will change as well. There’s a maximum multiplier of 10x the stake available. The multiplier will be active during the Free Spins feature.

When a ship symbol is transferred to the island map, it will leave a scatter symbol on its position. When you land 3 or more scatter symbols on the reels, you’ll trigger the Free Spins feature and receive 10 free spins. The current multiplier shown on the map will apply to all wins during the free spins. 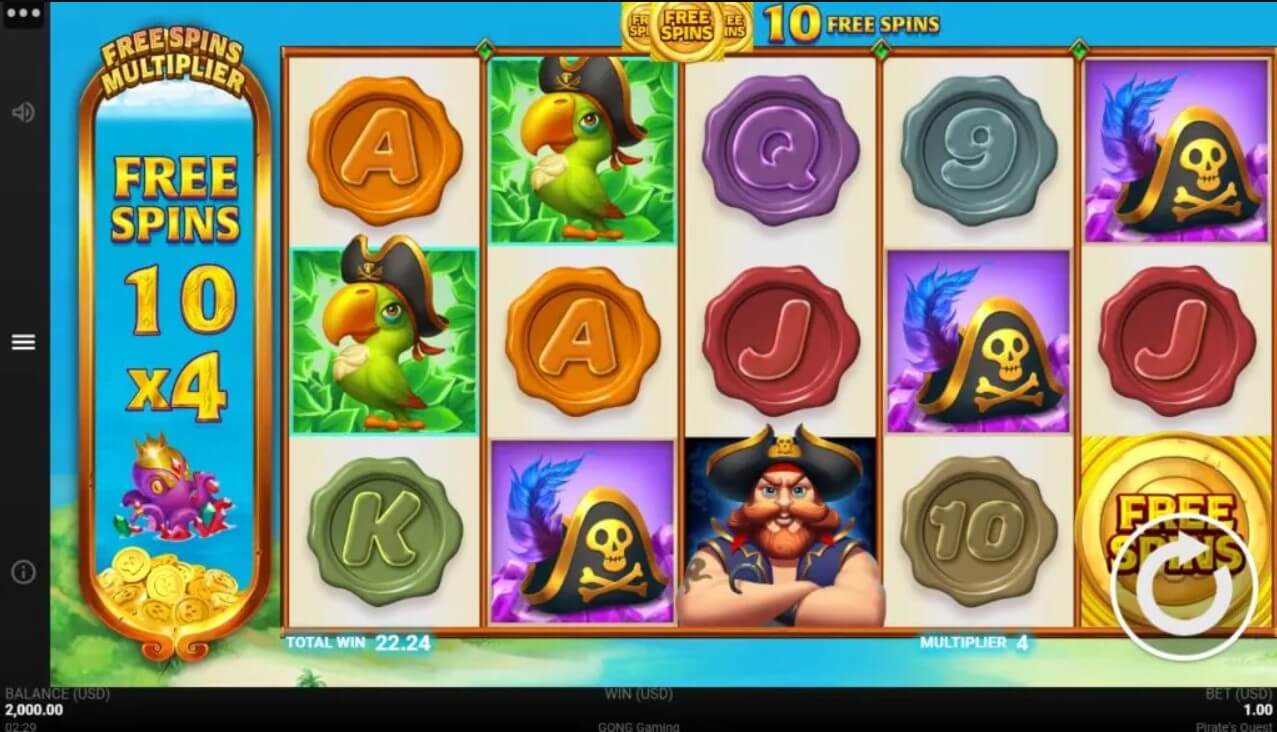 During the Free Spins round, 2 or more additional scatters will give you more free spins. Namely, 2, 3, 4, or 5 scatter symbols give an additional 2, 5, 10, 20, or 50 spins respectively. Additional spins can be won without limits, all of which will be boosted by the multiplier.

You can play the Pirate’s Quest slot on all desktop, mobile and tablet devices. The game is built with HTML5, meaning it’s playable on all mobile devices and any operating system. Its design, gameplay and bonus features work without issues when playing on a smaller device.

If you’re familiar with the online slots world, you must have heard about Microgaming. It’s one of the oldest and most popular providers of online slots. Thanks to its popularity, Microgaming has collaborated with many smaller studios to produce high-quality games. And here are some of the latest ones.

Meet Poseidon in the new slot by Microgaming and Triple Edge Studios called Ancient Fortunes: Poseidon Megaways. Here, you’ll have a chance to dive deep into the bonus section represented by the free spins game. But that’s not all, as you can trigger the Jackpot and win one of the four fixed jackpots on offer.

Furthermore, you can check the Serengeti Gold slot, a game that Microgaming developed with Just For The Win. It’s a safari-themed slot that plays on 5 reels with 25 paylines. Highlights include the Free Spins feature, as well as the HyperHold Respins where you can win cash prizes and/or fixed jackpots.

Finally, we recommend you to check the Solar Wilds slot, created by Microgaming and All41 Studios. Highlights here include expanding wilds and respins, medium variance and a 96.27% RTP, as well as a maximum payout potential of 1,000x the stake.

Pirate’s Quest is a well-looking slot machine that is fun to play. What makes this game stand out from the rest is the Multiplier Island Map feature where you’re required to collect ship symbols and progress on the map to win up to 10x multipliers. Besides that, here we have the standard Free Spins feature where up to 2,000x the stake can be won.

If you’re looking for a fresh and new slot game with pirates, the Pirate’s Quest might be a great choice for you. It’s fun, dynamic, mobile-friendly, and has excellent features.

Discover the Pirate’s Quest slot by claiming a welcome offer right from this page and play at top-notch online casinos.