Experience one of Microgaming's highlights of 2019 - the Relic Seekers slot. This is an adventure themed slot game with the consecutive winnings syle of play where each win makes room for new symbols. Potentially, this could lead to six consecutive wins in which the high paying symbols become wilds. The top payout is 4500x and there is a free spins game granted on three scatters. The game has 25 always active paylines and an RTP above the average. 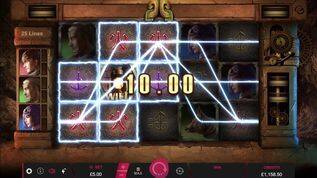 Enter the crypt for a chance to discover a treasure of 4500x when playing the Relic Seekers slot by Microgaming.

At last, a slot game by Microgaming that is in line with their standards. No filler here, just an exceptional reel adventure filled with features and the stuff that makes your online casino experience as easy going as 25 paylines on five reels. That's the arrangement of the reel set on the Relic Seekers slot.

How to Play Relic Seekers Slot

The players are looking at a play that can deliver 2x double on the winnings, a free spins bonus feature and bets that start at the low of £0.25 per spin. All the action starts with the push of the spin button, which is fittingly pink and sits underneath the third and middle reel. This will turn the always-active 25 paylines which work the same with whatever amount for the bet per spin.

But before you send the reels spinning do choose the preferred bet. This is done from the field that is to the left of the spin button, simply labeled BET. Use the plus and minus symbols to select a wager. The smallest bet starts at only £0.25 and the biggest bet is to the tune of £500.00 per spin. There is the Max Bet button represented by a stack of coins if anyone ever wants to up to the maximum ante.

Another useful button is Autoplay. It sets the reels spinning for the number of times that are preset on the few options there. The advanced menu lets the players select a win or a loss limit which is a good way to mind the balance. To turn on the Autoplay select the circular button that is to the right of the big pink spin button and you can kick back and relax for the duration of the selected turns.

How to Win Relic Seekers Slots

The paytable is a great source of information for the symbol wins and gameplay information. The players can find out exactly how much each combination of matching symbol pays for it landing on a payline in three, four and five instances. Besides this, the Relic Seekers bonus features are something that experienced players want to know the background to, such as what triggers the bonus feature and what each one can potentially bring back. To access the paytable select the 'i' button from the bottom left corner of the page, next to the cog button which opens up the gameplay settings board.

How to Win Relic Seekers Slot

The game's specialty symbol is the Wild which is represented by an oil lamp and it substitutes for any other symbol in the except for the scatter and this symbol comes in the shape of an orb with an inner mechanism that turns and ticks, causing it to bring on the free spins bonus.

The high paying symbols in Relic Seekers are the three adventurers and their dog. These are the game’s picture symbols, the most valuable of which is the senior archaeologist who can pay a top multiplied of 90x in the winning bet.

The style of play found in the Relic Seekers slot churns out the winnings in the manner of rolling reels. This means, just like in the Avalanche Falls found in Gonzo’s Quest slot, we have here winning symbols that disappear, making room for new sets and from there, we are happy to say that there are bonuses which are granted with consecutive wins.

Otherwise, the top win in this slot during the base game is 2250x and the top payout prize is 4500x. This means that even the ultimate winning combination or anything that is close to it made with a small bet, will amount to a sum that may be considered significant.

The rolling reels style of play invites the possibility of it occurring multiple wins made by a single bet. This is the advantage of Relic Seekers, as it isn't a free spins bonus that leaves the player's balance as is. Truly, there is a free spins bonus but the rolling reels may also grant consecutive wins. In fact, scoring two or more wins opens up the possibility for any of the picture symbols (bar the dog) becoming wilds and each one coming following a specific number of consecutive wins.

Microgaming own the accolade as the first online casino and it’s natural that all of their latest slots are fitted for the mobile screen. That is the case with the Relic Seekers slot. The players get the maximum visual input on any Android or Apple device that can play an online casino. In other words, that would be any of the casinos on the list on this page.

Although the top single event payout isn’t that awesome, the game offers a whole bunch of triggers for an exciting gameplay. The Relic Seekers free spins are a great way to score, and so are the consecutive wins.

Play this and other Microgaming slots by claiming a welcome bonus for any one of the casinos on this page.

Rich Wilde and the Tome of Madness