Join Finn on his adventure inside the Golden Tavern where a maze of symbols can snake down the rabbit hole and retrieve cash prizes. The game comes with a low to medium variance and three features, including a free spins bonus and multipliers being added in the base game, as well as during the bonus. The max prize is 2000x from a single spin and that is multiplied by a bet ranging betwenn 0.10 and 500.00. 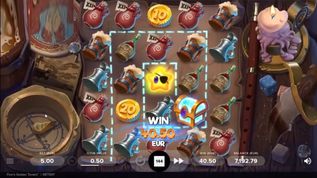 A low to medium variance online game with a swell gameplay and a potential max pay of 2000x from a single spin, is called Finn’s Golden Tavern slot.

You may be familiar with Finn from NetEnt's popular slot Finn and The Swirly Spin slot. The game gets a remake, in a similar manner, but a different setting.

The trail that leads to the core of the grid is still there, just like in the first slot. So it's safe to say that Finn's Golden Tavern slotis a do-over, that is, a re-cast of a familiar slot, which isn't such a bad thing because the Swirly Spin was a notable favorite few years ago.

The players will find themselves on a tabletop cluttered with dice, a lit candle, a compass and a coaster of a tavern that Finn desperately wants to get to. And the reason why? It's because this is a given tavern that offers to the players not only one chance to win money.

Symbol wins of up to 1000x can occur on the reel set from a single spin, and this is a good enough reason for any slots player to check out the game. But there is more, as Finn's Golden Tavern slots has a number of features, such as multipliers, free spins and a random coin feature.

NetEnt are known for making full -blown video slots so it is no surprise that they've given this game the due diligence it deserves. The style in which everything has been drawn and rendered makes for an entertaining visual experience.

There are some animated parts in the game. Nothing too wild, yet, well measured and proportional to the overall ambiance.

Design-wise, the highlight is the minimalist soundscape theme in Finn's Golden Tavern slot, which is, by our standard, ingenious on the part of the developers. Events are accentuated by Finn's exclamations, the uncorking of bottles and the occasional Ahoy Matey!

The reel adventure can commence once you have configured the total bet, which can be done by selecting a Coin Value from the corresponding window.

By using the down and up arrows you can browse through the coin values that are extrapolated across the game's fixed bet. The smallest bet is only ten pennies, which comes from a coin size of one penny.

You can make each bet with a single spin of the reels or you can engage the game in autospins mode by selecting the round button to the left of play.

Autoplay enables you to choose from the number presets and add the optional stops from the advanced menu, such as stop on a single win or stop on a total loss, for which you can specify the amounts.

This is a cluster-pay mechanism which is always fun to play and echoes the exact style that was part of the Finn And The Swirly Spin gameplay. Wins are made with the forming of a cluster, and this requires matching symbols. This can be helped by the wild, which substitutes for any other except the bonus symbols.

The grid consists of five horizontal and five vertical rows. The center of the grid contains chest that can be unlocked with progressing wins.

In other words, any win of three or more symbols will result in a subsequent win. The symbols that have disappeared make room for new symbols that follow up on the tail.

Whenever an exploding win occurs, the result is a wild that gets added to the tail. So we can see that the wins can be made in a manner of ways, making Finn's Golden Tavern a rather dynamic online slot.

The game comes with couple of reel modifiers that can boost your chances for making a bigger win. There is a free spins feature, but thankfully, it isn't the only event that can occur on the reels.

The First Slam feature can occur at random on a non-winning spin, causing a coin symbol to fall in another position and produce a guaranteed win.

The Random Coin Feature in Finn’s Golden Tavern slots is triggered when the chest is in the innermost circle and closest to the center. In the event, the chest turns low-paying symbols into gold coins.

The game is moved by the cosmic serpent, that is the spiral that makes all things move and waver. If the chest manages to get inside the void in a single spin, the game starts you with five spins which can be retriggered for many more times, and there is a chance for subsequent x1 multipliers happening to the wins.

NetEnt are known for releasing their slots as demos, so that the players can get a feel of a game before playing with real money. Let’s give this release few weeks after the release date and in all likelihood, it will be available as a demo.

If you liked the prequel, you will certainly like this game. If you like cluster-pay slots, this is another x-factor that will make the play enjoyable. Thankfully, reel modifiers and a free spins feature abound, so any given lucky streak can lead to potentially big cash prizes.

Start your adventure on the Finn’s Golden Tavern slots when you claim a welcome offer at the casinos on this page.