1024 ways to win and potential payouts of up to 4000x on the winning bet are part of the Gorilla Kingdom slots by NetEnt. The game takes place on a five-reel set that turns up high-paying jungle animal symbols, no wilds, and mighty scatters that can retrigger the free spins bonus many times over. 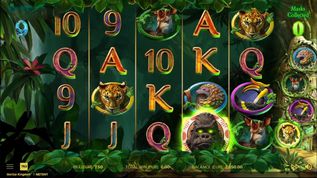 NetEnt are taking us back into the jungle with their take on the gorilla theme that's been quite popular lately.

In case you have missed the trend, a great place to start is the Gorilla Gold Megaways slot by Blueprint Gaming, which is just one of many captivating games.

But here we have NetEnt and one ought to pay attention because there may be few things that make this game set itself apart from the rest.

Gorilla Kingdom slot is a reel adventure that unfolds on four rows and five reels. These spin on 1024 ways to win, which means the payout mechanism dishes out wins on adjacent reels, regardless of the symbol's position on the row.

Besides a superb base game Gorilla Kingdom comes with a free spins bonus which entails collecting masks, which sends you forward on the track to securing potentially bigger payouts.

Anyone who has played more than a few NetEnt slots has gotten accustomed to the specific look and feel of their production. The same quality is evident in Gorilla Kingdom slots and the same goes for the gameplay dynamic.

As it is typical for their online slots, the symbols aren't fully animated on the reels, but there are lively, moving parts, especially in the bonus feature.

The usual can be found, the game's most valuable symbols gleaming, glowing and shining as they impact the reel-set with a win outcome or a close call.

Because the setting is a jungle, the visual field has just the right amount of clutter by way of lianas and leafs. The ambiance is filled with a dramatic musical score that keeps you company on this online slot adventure.

How to Play Gorilla Kingdom Slot

Your walk through the jungle can begin with the push of the spin button which can be found in the usual place - underneath the reel-set and just below the third reel.

Press that button once to send the reels spinning, which will deduct the active bet one time from the balance for each turn.

You can change your bet by pressing the minus or plus buttons in the left center area, where it says Coin Value. Some of you may have noticed that NetEnt changed the way in which bets are configured. Out are the Bet levels and we are left with the coin value only, which determines the payline stake.

Gorilla Kingdom slot offer a wide range of bets, very high stakes included. These range between mere ten pennies per spin to the maximum of £350.00. Regardless of the amount of the bet, the game will always spin across the maximum 1024 ways to win.

Did you prefer to kick back and let the game do the spins on its own? This is possible. You can opt for the autoplay mode by pressing the button to the left of Play. The menu that opens up lets you choose from the automatic spins presets and add optional stops, such as stop on a bonus feature trigger.

How to Win Gorilla Kingdom Slots

The ways to win payout mechanism can turn up wins based on two matching symbols for the least, if you get the animal kind.

These must begin on the leftmost reel and can post on any position of the reel, as long as the string is uninterrupted.

Being a jungle-theme slot, the Gorilla Kingdom slot symbols are all about the wildlife. The high-paying symbols are a set of animals and the low paying are the high cards with touches of vegetation and moss on them.

There are three symbols that get the same payout. These are the gorilla, the leopard and the bird, paying 4x on the winning bet. Only that? Yes, the payouts are small but the bonus feature takes care of that, and we'll get into it just below.

The game at hand has one feature but it is a mighty one. You need three, four or five scatter symbols to trigger 10, 15 or 20 free spins. The triggering symbol is the chunky, blue diamond which can stop on the reels during the bonus also.

In the Gorilla Kingdom free spins, the gorilla symbol seems to occur at a greater frequency. This symbol is also the carrier of the mask, which can randomly come with the gorilla.

Each time this happens, the mask transports to the meters in the right corner that keep track of the number of masks.

Each of the animals on that meter can receive six masks. When that haappens, that symbol will transform into the gorilla, so each instance of that symbol appearing on the reels, it will come to a full stop as a gorilla.

In addition to this, two free spins are thrown onto the tally. All animal symbols can transform into the gorilla, thus, the game can get nearly fully canvassed with that symbol. This may explain its value of only 4x for five of the same.

The bonus feature can retrigger and you need only two on the reels to get additional three free spins. The most that you can get are 20 from five scatters, and these can go on until indefinitely.

NetEnt have been withholding some of their releases from being released as free play demo slots. We don’t know if this game will become available as one, so it’s best to wait and see, but then, if you really want to play or even try the Gorilla Kingdom online slot, only 10p per spin keep you from doing that.

Overall, it is a powerful game with a solid payout mechanism. It has a superb bonus feature which is where most of the action really lies.

Discover the Gorilla Kingdom slots by claiming a welcome offer right from this page and play at top rated online casinos.