Irish Pot Luck comes with three rows and five reels. These spin across 20 fixed paylines that can produce wins of three, four and five matching symbols. The volatility is low to medium, which sounds very much like NetEnt, while the theoretical return to player percentage is 96.06. 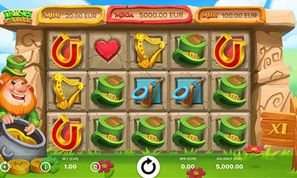 Emerald Isle seems like a pretty place to look for jackpot prizes and Irish Pot Luck is the perfect slot that can bring about such an outcome.

The game was made by NetEnt who have given it a Finn and the Golden Tavern-ish appearance, minus the grid-based playing field. What looks familiar in terms of idea and design is a welcoming reel adventure where the biggest payout is 5000x multiplied by the winning bet.

In terms of gameplay, the players can find few extra features and bonuses. Because no Irish-themed slot can be without a leprechaun, Irish Pot Luck slot has one, quite the cheerful fellow who is known to throw various nice surprises on the reel-set. Multipliers are also part of the game, both in the base and free spins.

We said at the start that the game resembles few games by NetEnt, such as both Finn And The Swirly Spin editions, but that is just the designers doing their renowned finish on the symbols. In Irish Pot Luck slots the two symbol categories are represented by the cards' suits and a number of leprechaun paraphernalia, such as horseshoes, cylinder hats, smoking pipes, harps and clovers.

Irish Pot Luck can produce a number of visual niceties and the game is filled with details. For example, the post sign in the bottom right turns when the multiplier amount on it changes. Winning outcomes are marked by a visual effect of golden light and coins, and the musical theme works for the setting like a lucky charm.

Players can start their exploration of this Emerald Isle meadow by setting up for the gameplay. This entails selecting a bet from the available range Simply pressing the coin stack button in the botom left area lets you choose between 20p and £100.00 per spin.

One of the options that you may want to consider is turning on the fast forward button, that can be found to the right of the spin button. This causes the reels to spin faster than the usual. This option can be turned on and off any time during the game.

Irish Pot Luck slotcan be played in autoplay mode, which means, the players can kick back, relax and let the game do the spinning on its own. Press the button to the lfet of spin to choose from the available presets for automatic spins. The advanced menu lets you set up a number of controls that look over the balance spend.

Last but not least, the paytable on Irish Pot Luck can be viewed by selecting the menu button, which are three horizontal lines tucked in the bottom left corner.

The game has a wild symbol that substitutes for any of the standard symbols. A scatter symbol, represented by the rainbow triggers the game's free spins bonus.

In terms of payouts. Irish Pot Luck slot has a range of decent wins that can be boosted with the help of the multipliers. Most valuable symbol is the wild, as it pays 50x multiplied by the winning bet when five land on a payline.

The name-giving feature is probably the bonus that players will see occuring most often in the base game. It is the Pot Luck extra, which is what inspires the leprechaun to throw on both wilds and scatters on the reel-set.

Another crucial element are the multipliers. Winning outcomes that coincide with the multiplier amount will be paid as such. Base game wins can get a boost by 2x, 3x, and 5x while the free spins bonus comes with stronger multipliers: 2x, 4x, 7x and 15x.

The free spins are triggered with three scatters in exchange for 10 spins, which can retrigger.

The jackpot prize can trigger on any regular spin and award the Mini at 20x, Midi at 100x or Mega jackpot at 5000x multiplied by the bet. This is possible through the jackpot wheel which is triggered by three jackpot symbols.

The wheel allows players to progress towards the innermost wheel when the wedge lands on the green arrow. Basically you need to hit that arrow three times during the bonus

The players can explore the game and its features with the help of free credits, which means, non-cash wins, at online casinos that host the game as a free play demo slot.

Although it isn’t anything special in terms of the graphics, the game has a familiar look and feel to everyone who has played Irish-themed slots. The major difference is that this is one of the few games that comes with a 5000x instant pot of gold.

Discover the Irish Pot Luck slots by claiming a welcome offer right from this page and play at top rated online casinos.

Wish Upon A Leprechaun