Spinata Grande slot isn’t just one of your average Mexican slots, it excels both in terms of visual layout and graphic effects, but its gameplay is also quite exciting with colossal wilds, free spins and the entertaining mini slot feature. 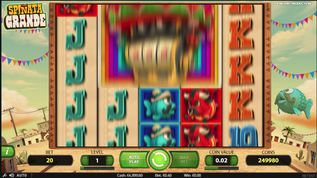 Mexican culture, their customs and traditions are extremely vibrant and colourful and that makes them perfectly suitable slot themes. In fact, quite a few, if not dozens of games with a Mexican theme have been developed and released over the years. Spinata Grande slot isn’t just one of your average Mexican slots, it excels both in terms of visual layout and graphic effects, but its gameplay is also quite exciting with colossal wilds, free spins and the entertaining mini slot feature.

Spinata Grande was developed by NetEnt, and that really says a lot, considering that NetEnt is one of the most renowned and successful online slot developers. The word spinata itself is a very clever wordplay and it seems that everybody who was involved in the making of Spinata Grande slots got pretty creative.

Many would agree that the piñata is the most popular Mexican tradition. One fun fact is that the tradition was actually brought to America by Europeans, but piñatas have become an integral part of Mexican tradition and it’s pretty hard to imagine a Mexican birthday party without a piñata. Enough about actual piñatas let’s discuss our Spinata Grande now.

This game has five reels and four rows, which is slightly different from most other slots that feature five reels and three rows. As a result of the increased number of rows the game also features more paylines – a total of 40. The game comes with few quite innovative features and the symbols are quite colourful.

The background against which the reels are set is a classic Mexican town, but the atmosphere is festive, you will notice cars and people wearing traditional Mexican hats as the pass by and everything is decorated with balloons and other ornaments.

ThisNetEnt game was released in the spring of 2015 and even though it’s been few years since then, it still looks and feels quite fresh and new.

How To Play Spinata Grande

NetEnt have used a pretty similar control panel on most of their games that were released in the past few years. The buttons are placed below the reels, they are light green, as a colour that is featured on the control panel of most NetEnt slots.

Even though there are 40 paylines, Spinata Grande is played with just 20 coins. And the minimum coin value is just one penny per line or a total minimum of 20p. You have two control options when it comes to adjusting your stake. You can increase or decrease the bet level and the coin value. There are ten bet levels and the coin values vary from a penny to a quid. The maximum stake in Spinata Grande slots is £200.

The auto play button can be quite useful if you want to sit back and watch the reels spin without having to click the button every time. The number of rounds can be as little as ten and up to as many as 1,000 spins. Just make sure that you’ve got enough funds, all spins after the auto play is activated will be staked at the same level as your original wager.

If you press the max bet button, your stake will be automatically increased to £200, so you won’t have to adjust the level and the coin value manually. Below the reels, at the bottom left corner you will notice few smaller buttons, including a sound button and by clicking on it you can toggle the sound effects off, or toggle them on if you have previously been playing in mute mode.

How To Win Spinata Grande Slots

A combination of at least three symbols aligned across a payline from the leftmost towards the rightmost reel is needed for a win. Only the scatter pays regardless of the respective positions of the symbols.

This game has few exciting features.

Colossal symbols come in two sizes – two by two and three by three and they appear as overlay symbols anywhere on the reels. The presence of a colossal symbol significantly increases the chances for a winning combination to be formed.

The mini slot bonus is triggered by the Colossal bonus symbol. Depending on its position on the reels it can be replaced by either three, six, or nine individual mini slot symbols. The mini-slot can award multiple prizes including free spins, coin prizes and more.

This game really speaks for itself. It has amazing features, great graphics, fun mariachi music, colourful symbols and everything you’d expect from a high-quality online slot. Spinata Grande slot will surely catch your eye. And if you’re looking to play it online, we have a great range of online casino sites that offer it, so register, claim your bonus and play Spinata Grande.

The game RTP is 96.84%, which is more than a solid return rate, this game gives fair chances of winning, considering that most slots feature a much lower RTP.