NetEnt starts this football season with Super Striker, a new slot with a couple of great features. Join the crowd in the stadium and be part of a reel match in the Super Striker slot. This is a pretty easy and simple slot that sports fans will probably want to give it a try. Super Striker slot is all about the world’s most popular sport and is going to be released just before the 2020 European Championship. Let’s take a deeper view of this game and its features. 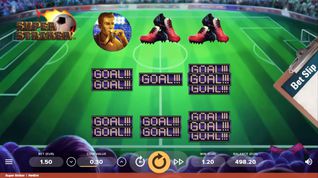 Everybody loves sports. There are people who enjoy playing sports, while there are others who prefer watching it. Anyway, given the number of sports fans all over the world, it’s not a surprise that gaming operators will develop sports-themed slots for its players. One of such slots is the Super Striker slot, developed by NetEnt, which will be released in April 2020.

Super Striker is a new slot by NetEnt that is all about football, one of the world’s most popular sports. If you are interested, make sure to play this game and see if you can score a goal in the three-reel slot with three rows and just 5 active paylines. In addition, the game features a bonus round with five levels and progressive multipliers that can lead to wins up to 5,000x the stake. The RTP of Super Striker is high enough, being at 96.04%, with medium to high variance.

In Super Striker slot, players will be allowed to place bets from as low as £0.10 to as high as £75 per spin. Given the fact that the game is able to pay up to 5,000x the stake, you can get up to $375,000 during regular spins. Also, the game features the Bet Slip mode that is super fun and has the potential to bring great winnings.

Super Striker is a sports-themed game, particularly football. It has modern graphics and great design. The background of the game shows a football stadium and you can see the player views from the seating area as if they are there. The soundtrack is also connected to the football theme, playing the cheers of the supporters from the seats.

When it comes to the game’s symbols, they are mostly football-themed. The low-paying symbols are the single Goal, double Goal, and triple Goal symbols. They pay for three of a kind, or when three of them are combined together. The middle-paying symbols are boots, golden boots, and a player. Finally, the high-paying symbol is the golden player that is worth 100x the stake.

How To Play Super Striker Slot

If you are ready to start your football adventure with the Super Striker slot, put on your football shoes and make sure to place your ideal bet before start spinning the reels. The bet can be placed with the “Bet” button that is located on the left corner under the reels. You can place bets from as low as £0.10 to as high as £75 per spin.

When you place your bet and are ready to make your first spin on the Super Striker slot, press the yellow rounded “Spin” button located in the centre under the reels. In addition, you will notice the “AutoPlay” button located next to the spin button, which will allow you to enjoy the football slot adventure hands-free.

In case you want to learn something more about the Super Striker slot, such as the paytable, feel free to press the three-dash button located in the left corner under the reels. There, you will find everything important about this game, including the paytable, game rules, bonus features, etc.

How To Win Super Striker Slot

This is a pretty small game, with only three reels and three rows available to play. In addition, the Super Striker slot has only five active paylines. So, in order to form a winning combination, you will have to land three matching symbols in one of the five active paylines. This should not be hard, given the size of this slot. Apart from the standard winning process, there are a couple of bonus features that will help you to form winning combinations and increase your winnings.

Even if there is no wild symbol included, Super Striker includes three bonus features that are very interesting and players will enjoy them. Let’s go through all of them separately.

Those players that have played the Scudamore’s Super Stakes Slot by NetEnt will be familiar with the Bet Slip feature. This feature allows players to place wagers on how many times a particular symbol will appear within a number of rounds. To activate the Bet Slip feature, click on the icon to the right of the reels and create your bet. Select one of the regular symbols, then the number of spins from 10 to 100, and place your bet. You can select to bet on 55 high-value symbols within the next 100 rounds at most, and you can win up to £978,000 with £1,200.

Free Spins is the bonus feature that slot players love the most. To activate the free spins in the Super Striker slot, you need to land either three football scatter symbols, or two football and a golden scatter symbol as the third. There are 5 different levels with an increasing multiplier during the free spins. Each level comes with an increasing win multiplier, with levels 1, 2, 3, 4, and 5 having multipliers of x1, x2, x3, x5, x10.

And finally, the Gold Scatter is a scatter symbol that can land anywhere. If you land this symbol during the base game, it will reveal a coin worth 10x or 20x your stake.

Super Striker is a great game for a slot with three reels and five paylines which has unique features and great potential. The fun is even greater with the Bet Slip feature, as well as with the Free Spins. If you are interested, you can try this game in demo version to see if you like it. Once you’ve decided to play this game for real, claim your welcome bonus at one of our recommended casinos and enjoy your next football adventure.