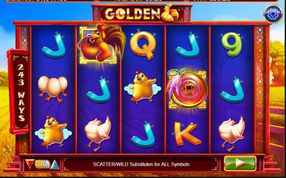 Play the Golden slot for a chance to win x5 multipliers for five of a kind wins during the free spins, bringing a jackpot prize of 10,000.

Golden is a slot game by NextGen gaming that has everything to do with a chicken farm. It appears though that this chicken farm is not like your typical farm. The reason being is that there are some strange things going on, such as a dancing chicken and three eggs up on their feet about to become chickens or roosters themselves, and bring cash prizes along the way to the lucky players out there. The game has five reels, three rows - which is a standard setting for the overwhelming majority of slots, however Golden slot has 243 ways to pay, which are delivered in the Adjacent Wins fashion.

The Golden slots isn't really your typical slot game and the theme is not the first reason for it. Besides the chicken, the rooster and the eggs, there is the not so slight suggestion that one of these is golden, and by way of that attribute, is valuable for doing a job that creates and multiplies. Speaking of things that can be multiplied, there are few symbols in the game that come with quite the prize, and the best detail about these is that the Wild substitutes for any, except the scatter. That being said, there is plenty of eggs to look for in the Golden slot alongside the theoretical RTP of 97.22%.

How to Play Golden Slots

Setting up for the gameplay happens in a jiffy, partly because the 243 paylines are all active and at all times. The only thing that needs to be figured out is located in the bottom left of the reel-set, where the players will eye a horizontal stack of coins and two arrows, one up and one down. Pushing the buttons causes the amount of the bet per spin in the Total Bet display to change by the prescribed increments.

The smallest possible bet that can be made per spin is £0.25 and the biggest bet is a whopping £250. However, there are many comfortable and normal betting amounts in-between, so the players could bet amounts like £0.75, £1.00. £1.25, £2.50, £6.25 and so on. Few other gameplay details are about the buttons that make the reels spin and that inform you about what is what in the Golden slots.

The Spin button is a green play symbol that is tucked in the bottom right corner. The Autospin button is also available but it is hidden behind the menu, which is represented by the cog symbol in the top right corner. Tapping this button opens up a menu where you can choose to play with or without sound, set the number of automatic spins, fine-tune your wager per spin, and access the paytable which lets you know the symbol pays and details about the bonus features.

The slot design comes with lots of eye candy and symbols that spring to life when part of a winning combination. Everything about the design reflects the idea of the theme. The background is a field that has been freshly sown and the reel-set is an ornate frame that appears to be the shelves where chickens reside inside the coop.

At any rate, the main symbols, that is the game's picture symbols are a tiny chick, three eggs with feet on them, a dancing chicken, a rooster, a wall ornament of a rooster, a chicken coop, and the three specialty symbols. These are the high-valued ones, while those of the other order are the high cards which start with the nine and end with the ace.

Besides the graphics end of the game, there is an auditory experience to be had. The slots experts at NextGen Gaming have hired some decent musicians to play out the tune that provides a soundtrack to the gameplay. So you will get to listen to some laid back strumming and whistling that completely works with a farming theme.

How to Win Golden Slot

Winning the game is a matter of luck, always, as slots are games of chance. That being said and know that all potential outcomes are in the hands of Lady Luck, it is time to check out the symbol pays and the winning potentials. We let in before that there are few high-paying symbols here.

The wall ornament portraying a perched up rooster on a fense is the game's most valuable symbol. It brings a payout of 2000 coins when you land a string of five matching symbols on the reels. The next most valuable symbol is the coop, paying 1000 for the same  outcome. Last of the high paying pictures is the dancing chicken, bringing 500.

There are three specialty symbols. The Wild is the proud rooster who substitutes for all symbols, including the Scatter. The scatter is a feeding thing for the chickens and scatters the wins which are multiplied by the bet.

The third specialty symbol is the Scatter/Wild which appears during the Golden free spins bonus game and substitutes for all symbols while appearing on the middle three reels (second, third and fourth).

The free spins bonus is triggered by three scatter and/or wild symbols landing on the reels. This is where the player stands a chance to win big if five of a kind outcome appears on the reels, in which case the winnings are multiplied by x5. What is more, the free spins game of the Golden slots can be retriggered.

To start your farming adventure on the Golden slot you can claim a welcome bonus at one of the casinos on this page.