Open a book of magic and play Merlin’s Money Burst slot, a five-reel slot game by NextGen with a RTP 96.75%. The game has two bonus features, with special and expanding wilds, re-spins triggered when four same symbols appear in the 2x2 part of the reel-set. The free spins bonus is triggered by the scatter and there is a top symbol payout of 1500x. 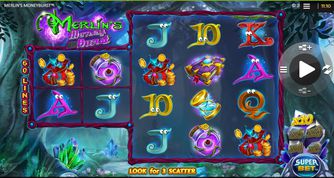 Play Merlin’s Money Burst slot, a continuation of the series, and one which throws in free spins, respins and a 1500x symbol prize.

Anyone who's played Merlin's Millions and Merlin's Magic Respins slot should recognize that old beard in a throng of magicians. Indeed, Merlin, the slots magician is a famous face by now and he is the start of yet another release called Merlin's Money Burst. The game has been made by the slots experts at NextGen and has a load of features that makes it entertaining and fun to play.

Set the stage for the gameplay by selecting the desired wager from a wide range of bets. The smallest bet of £0.30 is a point of departure for this slots adventure, but there are multiple sums, with a cap of just £7.50. Indeed, there don't need to be extraordinary sums for the bet per spin for the players to have fun.

On the other hand, if anyone wants to engage in a higher-stakes play, the game does provide the option called Super Bet. Click that button through the multipliers, and see the amount of the total bet rise in heft. That way, by selecting a x2 on the highest bet, the total bet will be £15.00. By selecting x10 the smallest bet of £0.30 will rise to £2.50.

As for the reel-set and the number of paylines, Merlin's Money Burst slot has a magical configuration. The first two reels from the left have only two rows. The other three reels of this five-reel slot have the standard three rows. And across it all, there are the 60 lines that are always active regardless of the bet.

To set the reels spinning and to invite Merlin to conjure up some of his magic, press the Play button, which is in line with the second row from top, and to the right of the reels. The coin stacks with the plus and minus symbols are utilized towards configuring the bet and the Autoplay button is to the right of that controls circle.

To set the reels spinning on their own use that button. It will provide the option of selecting ten, 25, 50 or 100 automatic spins, while drawing from the balance the amount for the bet that's been previously set. Because there isn't the option of setting a win or a loss limit the players will just need to be mindful of the balance.

The paytable on Merlin's Money Burst slot is a useful source of information for anyone who wants to see the symbol pays and information about the bonus features. The paytable can be accessed from the three-dash symbol to the left of the play button and then by selecting the 'i' icon.

The game is filled with features and the players might want to know these ahead of time. But first of all, the symbol pays according to those that are the most valuable. The primate in Merlin's Money Burst is kept by the magician himself. His symbol pays 1500x on the line bet when five matching symbols land on a line. The scatter symbol pays any way, meaning, the bet will be multiplied by the amount that's been won.

The book of magic, also known as a grimoire, pays 500x multiplied by the line bet, and it is followed by a vial with a magical purple liquid, which pays 300.

The game offers a respin feature when any matching symbols fill reels 1A, 1B, 2A and 2B, which are the first four squares of the reel-set. This grants five respins, with the four triggering symbols held in place while the rest spin. Merlin can turn up at random, enchanging other symbols to become wild.

This bonus feature grants 10 free spins when three or more of the diamond scatter symbol land on reels three, four and five. Merlin is also there to surprise us with turning some of the symbols into a Wild. There is the option of an entire reel becoming wild.

The game has been give a return to player theoretical outcome which is quite something. With 96.75% at the total of the RTP value, this is an above-average online slot.

This is a Nextgen game released and supported by SG Digital, which is a world-renowned company. Both of these outfits ensure that their releases are fitted for the mobile screen. As long as the device is android or apple, and the casino loads on either, the slot game will do so as well.

The game is a real improvement compared to Merlin’s Millions and Merlin’s Magic Respins, in terms of graphics and gameplay. The top symbol payout of 1500x and the respins and the free spins, with the addition of random wilds created by the magician, makes this release one to consider a potential favorite.

To play this and other amazing slot games, start here by claiming a welcome offer from one of the casinos on this page.