Players will find a grid-based slot that has six horizontal and six vertical rows that make it possible for cluster payouts to form anywhere on the screen. Players can spin the reels starting with 10p per spin on a game that has a theoretical return to player (RTP) of 96.26%. The Demon Code also has medium to high variance and a maximum payout potential of 12,500x. 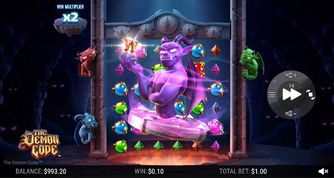 It looks like demons are having a blast on the grid of this NextGen release that takes the player to the ancient underworld. The theme is new for our slots experts. We've seen our share of hell-inspired games but this puts demons on the pedestal, so it's a good change of scenery and The Demon Code slot makes good use of it.

The game comes from NextGen and is released by Scientific Games Digital, so players can expect a high-quality adventure. It just happens so that Demon Code is filled with reel modifiers that are assigned to each one of the demons, but there is also a free spins bonus that makes the gameplay even more exciting.

NextGen has put four demons with different personalities at the center of this reel adventure. The grid and the demons are located inside a cave that is filled with blinking eyes that glow in the background dark. The Demon Code slots is actually filled with moving parts.

The grid is one lively place, teeming with activity, as the symbols pop and disappear from it and their positions are filled with symbols from the avalanche. Wilds create a special visual effect and so does the extending of the grid in the free spins bonus, which is caused by a pair of gigantic arms that emerge from the fire on top.

Everything about the game is exciting and fun to watch and this is only the visual aspect of it.

How to Play The Demon Code Slot

Anyone is welcome to enter this funky demon lair and get a load of the glowing pyre and the amazing ambience, but to play the game one needs to get familiar with the controls and buttons.

NextGen has placed all of the essential buttons on the right-hand side. The circular socket holds the Play button in the middle, the menu button to the left, autoplay on the right and the bet increase and bet decrease above and below.

Players can press play each time to turn the reels on The Demon Code slot or simply set the game to play in autoplay mode. Pressing that button opens up a list with presets for the number of automatic spins. These start with 10 and end with 100.

To start autoplay select the preset and press the play button. To stop this mode press the same, autoplay, button to the right. In terms of the bets, Demon Code has a range that starts at 10p per spin and ends at a maximum of £20.00 per spin.

How to Win The Demon Code Slots

Winning outcomes in this game are formed by clusters of four or more symbols that land adjacent to one another, horizontally or vertically. Players can get multiple clusters from the same spin and there is a wild symbol that can help make the winning outcomes.

In terms of value, the pyramidal gems pay between 1x and 100x for payouts consisting of 4 to 25+ symbols. The high-paying symbols of The Demon Code slot are the green, blue, pink and red pearls. These pay between 2x and 3x for simple wins of four in a cluster, 6x to 20 for clusters of 7 to 9 symbols and between 200x and 500x for the optimal outcome of 25 or more symbols.

The game comes with a wild and a scatter. Each scatter that lands on the grid is added to the meter and its position on the reels is replaced by a wild. Players need four scatters on the meter to get 10 spins, during which any of the reel modifiers can trigger at any time.

The demons appear outside the grid and each one is represented by a talisman that activates the corresponding event.

Players can try the gameplay and all of the extra features with free credits at online casinos that host this game as a free play demo slot.

NextGen has made a terrific grid-based, avalanche-payout slot that comes with dynamic gameplay, amazing modifiers and an absolutely astounding maximum win potential. What else is there to say, except that players can get a taste of Demon Code with as little as 10p pers pin.

Discover the The Demon Code slots by claiming a welcome offer right from this page and play at top rated online casinos.