Learn and practice the code of honour and morals adopted by the Japanese samurai with Bushido Ways xNudge slot. This superbly designed warrior theme will enable you to be hand in hand with the bravest warriors on the reels, where you can win up to 30,000x your bet. Pay attention to the Geisha symbol, as she’ll always appear in reel size to boost your wins and trigger a few bonus features. A few of the highlights in this slot game are the recognisable sliced wilds, transforming symbols and two bonus games that come with even more wilds and multipliers. Stay with us as we explain the gameplay in our detailed Bushido Ways xNudge slot review.

Bushido is found in warrior cultures, and this term combines practices, principles, philosophies and codes of behaviour supporting the samurai’s life. They might not exist nowadays ( or at least we don’t know about them ), but for the Japanese, the philosophy and spirit of Bushido are coded in their psyche. From the infamous and notorious passages of San Quentin, Nolimit City is unleashing their inner samurai warrior with Bushido Ways xNudge. Learn more about the codes of honour, respect, tribute, glory, fear and revenge in our review below.

The Bushido Ways xNudge slot is a Japanese, warrior-themed slot by Nolimit city played on a 5x4 grid with 1,024 ways to win. The xNudge mechanic means that ways to win increase during gameplay, reaching up to 24,576 if you get the best of the nudges and sliced wilds. To win, you need to match at least 3 symbols on adjoining reels, starting from reel 1. 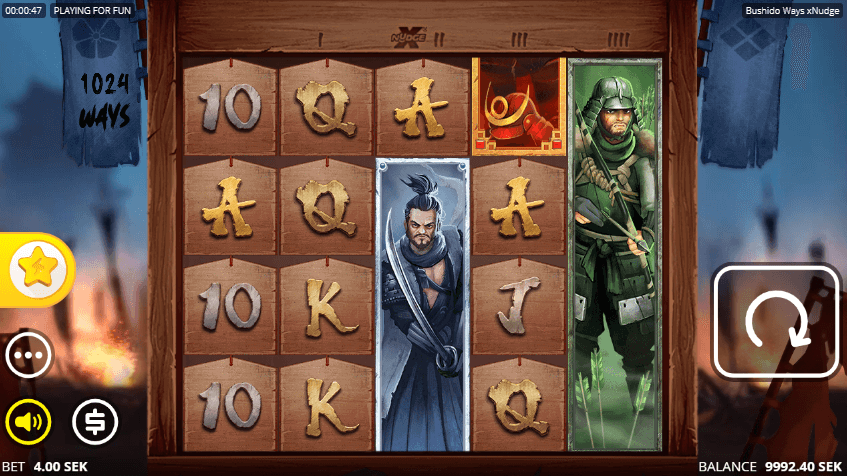 Before you embark on this samurai adventure, you need to set up your stakes in the range from £0.20 to £100 per spin. Click on the dollar sign below the reels and choose one of the 25 bet options. Prepare for a volatile reel action with sliced wilds, special wild Geisha symbols and scatters that transform all lower value symbols into high-paying warriors!

Considering all the in-game extras and two bonus games you can trigger during the base game, you can win up to 30,000x your bet. This is a very fast-paced game, and if you’re lucky to trigger at least one of the bonus games on offer, you’ll experience an electrifying, highly volatile reel action where boosts will leap onto your total board.

When it comes to the slot games developed by Nolimit City, every title tells a different story, more interesting and equally attractive than the previous ones. The authentic feel, identity and touch to their visual experience cannot go unnoticed, and Bushido Ways xNudge is not an exception. There’s a strong, warrior feel to the design, with ripped flags and lit torches in the blurred background. The traditional, uplifting music in the background really gets you going, feeling like you’re in the samurai’s front row.

On the wooden reels, you’ll find classic A-10 symbols accompanied by three higher value Samurai Symbols always appearing as stacked. Even though these are premium symbols, don’t expect to win much if you align them in a winning combo. Luckily, many features add value and maximise the win potential of the gameplay. 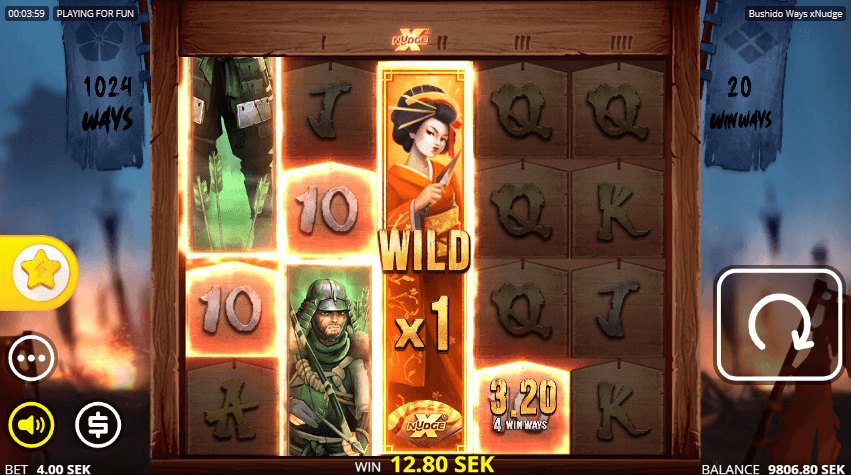 Staying true to the Japanese theme is also the attractive Geisha nudging wild symbol that lands only on reel 3. Besides this, there’s a regular wild symbol that could be divided once it lands. Finally, the bonus symbol triggers the bonus games, vital for getting you closer to the big prize.

The theoretical RTP of the Bushido Ways xNudge slot is 96.01%, which is the industry average. Also, this slot comes as a highly volatile one, rated with a 9/10 from the developer. This means that you can expect to land less frequent but bigger wins.

In terms of maximum payouts, this slot game can deliver up to 30,000x the stake from a single spin. If you want to learn more about RTP and variance models, read our detailed Variance, Volatility and RTP guide and see which one suits you best.

Prepare for a fierce, bonus feature round with sticky Geisha wilds, transforming symbols, sliced wilds or the highly anticipating Shogun spins. Let’s start with the xNudge wild Geisha symbol. She will land only on the middle reel, keeping its original 1x4 size. This way, she nudges so that the whole reel turns wild. For every wild nudge, the multiplier is increased by 1x.

Sliced wilds, on the other hand, can land anywhere except on reel 1. If you manage to land a single wild on reels 3,4, and 5, you’ll activate the Sliced Wilds feature. So, on reel 3, 4 and 5, sliced wilds count as 2,3 and 4 wild symbols, respectively. These wilds also maximise the ways to win, and they can go all the way up to 12,888 ways to win. During bonus games, these wilds will copy themselves downwards to the bottom before they’re sliced.

The option to transform symbols on the reels is active once you land a stacked Samurai symbol and a bonus symbol on the same spin. Then, the Samurai symbol transforms into the most rewarding symbol that’s currently on the grid. All Samurai symbols will then take the higher-rewarding shape. 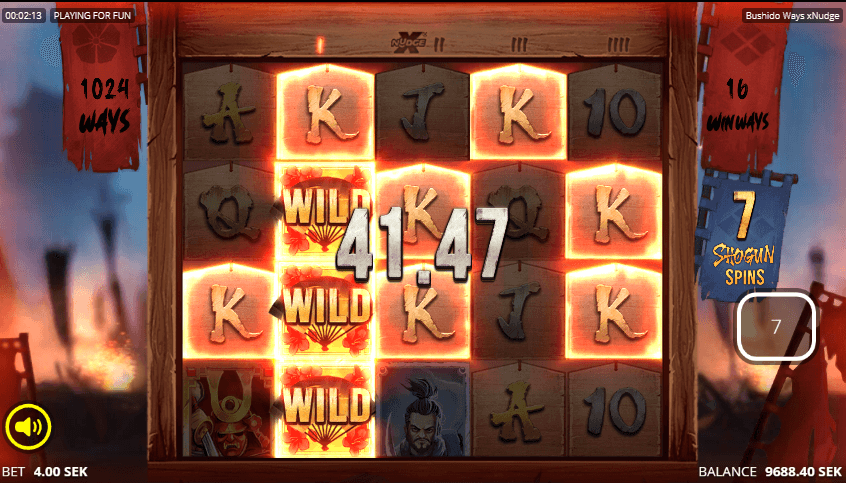 This bonus game is activated once you land 3 or more bonus symbols on the same spin. You’ll win 8 Shogun spins, while every additional bonus symbol will add another free spin to your total. During this feature, you’ll land at least one wild on reel 2,3, 4 and 5 on each Shogun spin. If you’re lucky to land a Geisha wild, you’ll proceed to the Geisha Spins bonus game. 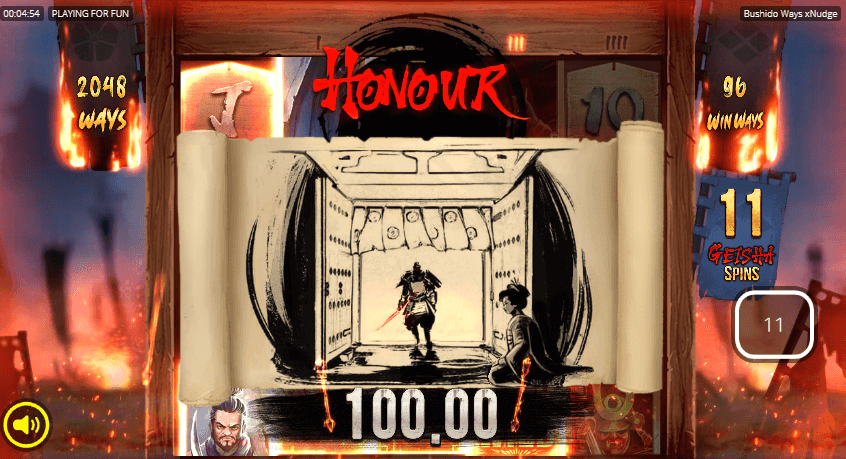 You can trigger this feature by landing 3 bonus symbols and a stacked Geisha wild on the same spin. Again, you’ll get 8 free spins to play with. Each nudge caused by the Geisha will bring a sticky multiplier into play that can go up to 4x. Every additional bonus symbol will add +1 free spins to your total. As you can see, the concept is quite similar to the previous bonus game, as you’re also guaranteed to get at least one wild symbol on every spin.

The Bushido Ways xNudge slot is built with HTML5, making it adjustable to any mobile device and any operating system. The game works seamlessly on all mobile devices. The design, bonus features and everything that is part of the game perfectly adjusts on a smaller screen.

Curious to check out other slot titles launched by Nolimit City? For a start, let’s take you deep underground unto a gold mine to play Fire in the Hole slot. This heated, highly volatile and rewarding game can get you closer to a win capped at 60,000x your bet.

Or, you can explore the differences between the East Coast vs West Coast, where there are two different approaches when it comes to the reel action and symbol boosts. Powered by the xWays engine, you’ll play with more than 80,000 winning combinations.

Meet Akhenaten, a not so famous ruler from Ancient Egyptian times and let him take you on a search of hidden treasured through the Tomb of Akhenaten slot. This title introduces progressive multipliers and pyramid wilds that can win you more than 20,000x your bet.

As our final words to the Bushido Ways xNudge slot review, we would say that we were impressed by this game’s potential, especially during the bonus rounds. However, as Nolimit City always strives to pack exciting and advantageous in-game features, we were not surprised.

The key to big wins is the sliced wilds feature that increases your ways to win. If we have to choose between the two bonus games on offer, we’d say that the Geisha spins offered much better reel action. The sticky multiplier can really get you closer to the 30,000x prize. Overall, there’s a great story waiting for you if you decide to spin the reels of this slot game. Good luck, and remember always to play responsibly.

Explore the Bushido Ways xNudge slot by claiming a welcome offer right from this page and play at top-rated online casinos.