While it isn't a megaways engine, the xWays is very much like it and offers the familiar cascading or tumbling wins style of play. This means, a win from a single spin can result in a greater number of wins, so lucky punters, brace yourselves. 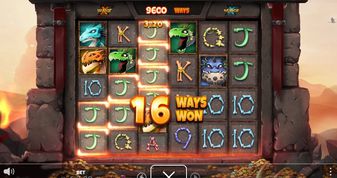 Play the Dragon Tribe slot for a chance to win up to 27,000x in a combination of free spins and bonus features.

Play in the colorful world of dragons and magic where the xWays machine can deliver payouts on up to 20,376 winning combinations.

Dragon Tribe slot by Nolimit City takes you to an unlikely world of cartoon-like dragons and their backbones curled into the high cards. These are the symbols that comprise the high and low win categories on the game, which can find their place on a reel-set arrangement of four rows and six reels.

The slots experts at Nolimit City have thrown in a number of features. Besides the two Wild symbols and the extra spins, Dragon Tribe has a gauge on the left side of the reel that count consecutive wins. While the engine is completely different to Wicked Dragon Wilds slot, there are some similarities in the theme.

The theme mixes dragons and humans and places this alternative world in the stone age as there is no other era that would make sense. Fittingly, the reel-set consists of a stone structure and note the detail, there are two belts that have been tugged-broken by those unruly dragons.

The symbols are lively on the reels and visually there is enough going on to give Nolimit City their deserved credit for putting together a decent slot game. Dragon Tribe slot also offers a somewhat epic-sounding musical score, so that all aspects of the gaming experience are covered.

How to Play Dragon Tribe Slot

Your adventure can begin once you select the preferred bet per spin, unless you are fine playing with the default bet. To pick from the available sums you can utilize the minus and plus buttons in the bottom left corner of the screen.

The smallest bet is £0.20 per spin and the biggest is £100.00 per spin, with a range of other amounts between these two. Dragon Tribe slot plays the bet across the starting 4096 ways to pay which can expand on the full 20,376.

As it is expected the rows on reel-set move and shift according to what goes on in the game. In other words, the greater the number of consecutive wins, the bigger the number of the ways to pay.

To speed up the reel action you can press the thunder button that is to the left of the spin button. And to the right of it is the option that sets the reels in automatic spins. This menu lets you configure a number of stops, which help mind the balance as you set the game to play on its own.

How to Win Dragon Tribe Slots

The game makes its payouts from the leftmost reel and on to the right, with three or more of the same symbols plus the wild.

Those who have played Megaways slots before will have no trouble understanding how the xWays works, because it is pretty much the same.

Dragon Tribe slot offers a host of picture symbols that comprise the high-paying category and the cards which pay lesser amounts.

The most lucrative symbol to get in six positions is the girl. The optimal outcome without any multipliers results in 3.75x multiplied by the triggering bet. The rest of the symbols carry smaller wins.

Now this isn't the most exciting paytable in terms of what you can get for a win, however the game does its deal with the bonus features and reel modifiers.

Here the two wild symbols can come in really handy, as can the multipliers. Without these Dragon Tribe can only deliver slim pickins.

Like we suggested above, there are two wilds that can come into the play at any time. The xNudge Wild can stop on the three middle reels only. When in the works, each consecutive win with the wild the multiplier amount increases for that outcome and this can go up to x6 on the win.

The wild shifts one row with each spin. When it falls to the bottom row it expands on the reel. These symbols can multiply between one another if more than one affects the outcome on the reels.

The Dragon Tribe slot logo is the game's scatter which can trigger two types of wilds: Dragon Spins with wins of up to 11,000x and the Dragon Spins Extreme where the volatility is a lot higher and where both the xNudge and xWays features are active, towards potential wins of up to 27,000x.

The game may be found as a free play demo slot at a number of online casinos that host demo games available to account holders.

High volatility overall that can lean towards medium volatility at times, and low symbol payouts in the base games without the multipliers and features included, is what defines the character of Dragon Tribe. On the other hand, the win potential is huge and the bonus features aren’t too infrequent after all.

Claim a welcome offer and discover the Dragon Tribe slot at the online casinos on this page.