Players will find a layout of three rows and five reels that spin across 25 paylines that are always active. Winning outcomes are made with at least three matching symbols and the smallest bet is 20p per spin. Secret Treasure slot has a theoretical return to player of 95.19% and medium variance. 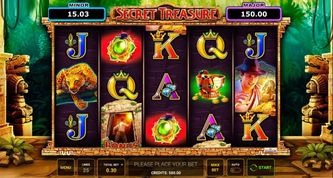 The slots experts at GreenTune-Novomatic have explored the realm of hidden temples underneath deep jungles only to arrive at an amazing online slot called Secret Treasure. The game looks like a cross between one of those Book Of games and Indiana Jones, so thrill-seekers will have a good time finding the potential wins or either the Minor or the Major jackpot prize.

The game has an exciting jungle-themed base game that can add a wild symbol to the winning outcomes. There is also a scatter symbol that triggers a free spins bonus and a gamble game where players can take their winnings for a chance to make them double. Also, either one of the two instant jackpots can drop any time during the base game for a prize of 50x and 500x multiplied by the winning bet.

The graphic design is right up the alley of those who enjoy mysterious premises and ancient civilizations. Secret Treasure slots is set in a jungle that has all but swallowed an ancient Mayan temple. Visible along the sides of the reel set are two sitting warriors made of stone with a jaguar head on top. Not coincidentally, one of the major symbols is a jaguar in a pouncing pose.

The low-paying symbol category consists of royal cards adorned with sparkling elements and a royal emblem. The high-paying symbols of Secret Treasure are the adventurer, a chalice filled with gold coins and a corn snake, and a green, radiant talisman. Payouts bring out the animation in these symbols and the game announces the big wins in an according manner.

How to Play Secret Treasure Slot

Setting up for the gameplay requires of the player to first and foremost select the amount of the wager. This can be done by pressing the minus and plus buttons in the Total Bet window. To start the reels spinning press the green rectangle button that can be found in the bottom right corner of the screen.

Another way to play the game is by selecting the Auto option. Pressing that button starts the automatic spins which continue spinning until you press the same button. The autoplay mode deducts automatically the total bet amount one time for each turn. The smallest wager in Secret Treasure slot is 20p and the maximum bet is £45.00 per spin.

There are few other buttons on the reel-set that may come in useful. The bottom left corner of the screen has the sound settings and the Exit button, which leaves the game for the lobby. The menu button leads to the paytable, where the player can view all of the symbol payouts. On top of the reels there are two displays for the jackpot amounts.

Both jackpots are in-game progressive, which means their amount is relative to the selected bet. The higher the bet is the bigger the potential jackpot prize.

How to Win Secret Treasure Slots

Winning at the game requires winning outcomes of at least three symbols to land on any one of the 25 paylines. These must begin on the leftmost reel. There are two symbols on the paytable that can create a payout with only two of a kind, starting left to right. These symbols are the jaguar and the adventurer.

There is a free spins bonus game that can trigger with three, four or five bonus symbols. That symbol is represented by a picture of the adventurer entering inside the temple. So any of these combinations starts 10 free spins.

At the start of the bonus players get to select one of four objects which is highlighted. Each wild falls underneath the selected icon. Any wild that is awarded during the free spin will replace the original symbols on the reels. That symbol gets a golden overlay to mark itself as the wild.

The game awards three, four and five bonus symbols for the free spins bonus, however, if two land on the reel set the player gets to play for one of the jackpot prizes.

The game is available as a free play demo slot, enabling players to try its features and gameplay with free credits. It is possible to discover Secret Treasure as such at online casinos that host slots in practice play mode.

There are multiple reasons why this game is appealing to the players: there are two jackpots, two high-paying symbols and a free spins bonus that can have more than one wild symbol at any given spin.

Discover the Secret Treasure slot by claiming a welcome offer right from this page and play at top-rated online casinos.

John Hunter and the Book of Tut