Players will find a reel set that has four rows and five reels - just about the perfect layout for 1024 ways to win. he smallest bet is 50p per spin and players can make winning outcomes with three or more symbols across the reels. The theoretical return to player on Sevens Staxx is 95.16% and the variance is medium. 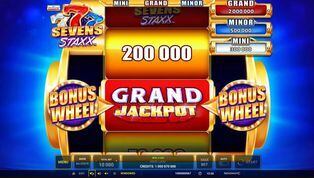 Just when we thought GreenTube-Novomatic had forgotten all about retro slots Sevens Staxx slot proved us wrong. This adventure on five reels is encased in a golden cylinder that reminds of one of the few cryptex games that came out recently, such as Golden Cryptex slot. But this is a different beast by GreenTube as it comes with three big jackpot prizes.

Players can play for a chance to win one of three jackpot prizes, of which the Grand pot is 2000x heavy, but Sevens Staxx also has a nice base game. There are few features that can shake out interesting winning outcomes - bonus symbols, locked reels and hold and spin.

In terms of graphic design, this is truly a fascinating retro slot that puts the often-repeated symbols into a setting that brings out the best of them. There are multiple moving parts on Sevens Staxx slots that create a dynamic gameplay. The visual effects are making the screen become alight in flashes of gold, so it is really a game that can keep you on the edge.

The low-paying symbol category consists of various fruits: lemons, cherries, plums, oranges and watermelons. High-paying symbols are stacks of money, bells, the three different sevens symbols and the game's bonus symbols. The most anticipated event on the reels is the stacking of the sevens, which causes Sevens Staxx to shake and rumble to a cool visual effect.

How to Play Sevens Staxx Slot

Playing the game requires getting familiar with the surroundings. The three jackpot tiers are displayed in the top right corner of the screen and the corresponding reels that can stack up high with sevens are at the top of the reel set.

Anyone who is familiar with games by GreenTube/Novomatic will find the settings and controls in the same place as in many other slots. The play button is the usual rectangle with the symbol for play. Players can press that button another time following the initial spin in order to short-stop the reels.

Each spin deducts the bet amount from the player's balance. To change the bet refer to the Total Bet setting and use the minus and plus buttons in order to select your desired wager. The bet amount can be changet any time between spins.

One way to play Sevens Staxx slot is by turning on the autoplay mode. This causes the reels to spin automatically until you press the same button again. Few other buttons are the speaker button in the bottom left corner and the menu, where players can view the symbol payouts.

How to Win Sevens Staxx Slots

Winning outcomes can occur on 1024 ways to win and that means matching symbols can appear from left to right on adjacent reels, regardless of their row position. This enables the payout mechanism to create winning outcomes that contain more than five of a kind symbols.

The most lucrative prizes on Sevens Staxx slot come with the three seven symbols, while the fruits can trigger amounts that are a lot smaller. In other words, a balance is struck between the payout potential in the base game and the extra features that can trigger a big win, and the jackpot prizes.

The game comes with a couple of features, but no wild symbol. There are three seven symbols - blue, red and white - that can stack up on reels two, three and four in order to trigger one of the jackpot games. In the event, the reel expands and starts you with three respins where the seven symbol is the only one on the playing field.

The jackpot bonus is basically the Hold and Win type of game, but the way in which it triggers is unique, thanks to the staxx. Each seven symbol that lands on the reels resets the respins back to three. Filling up the entire field with the seven symbol triggers the corresponding jackpot prize.

The game has another bonus event. The wheel bonus symbol landing on reels one and five activates a wheel that you spin for a chance to win 20x on your bet or one of the jackpot prizes.

Players can find an amazing demo slot that lets you get a feel of the gameplay and the features. The demo is available at online casinos that host this GreenTube title.

A medium variance adventure with three jackpot prizes and an engaging base game is just what we wanted to see in a retro outfit. The game is worth checking out and the hold and win bonus is one of the best we’ve seen.