Explore the Arabian bazaar to discover three incredible lamps that can be fired up to produce one of four bonus features. The Wild Genie slot has five reels, three rows and 25 always active paylines that spin for a prize in six figures that is multiplied by the line bet. The game's most valuable symbol is Aladdin, paying 2500x on the line bet and a return to player theoretical outcome of 96.36%. 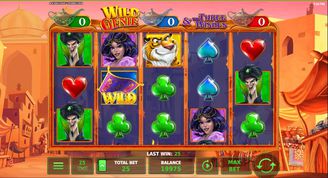 If you're ever feeling the need of experiencing the vibe of the orient head to the Wild Genie slot. With a full name of Wild Genie and the Three Wishes, this is a slot game that comes with three bonus feature prizes that are awarded through one of three lamps of a different color. The game contains the symbols that in essence grasp the story of Alladin and the Genie of the Magic Lamp. Besides the virile youth there is the ominously grinning prince and the beauty named Jasmine. We get it, StakeLogic wanted to create something that rings a bell, and they've done it, to a good effect.

The Wild Genie slot has 25 paylines and these are always active. The arrangement of the reel-set is three rows and five reels that spin on a background of a lively bazaar, with the occasional flying carpet ride above it. Overall, we have here a fun to play game which comes from a provider that hasn't released too many slots, but which is certainly able to produce excellent ones, as can be seen that the game is licenced to Novomatic.

Let's discover now further detail into the game, how to set it up, how to play it and details around the winnings.

How to Play Wild Genie Slot

It takes just a few clicks to set up the game before spinning the reels. The place where this is done is Total Bet and clicking or tapping the arrow will open up the coin value, which ranges between £0.01 and £2.00 per line. When shifting between the coin value amounts the field that contains the player's Balance will change, to reflect what amount is left available for the subsequent bets when a specific bet is selected. The ticker, which is a slim strip containing information, is located at the very bottom the reel-set and the controls. This is where the players can view the final size of the bet per spin and the state of the balance.

Some other buttons that may come in useful are the autospin and the paytable. The first button should be known to slots players at large, both new and veteran. But just in cases, what it does is, lets the reels turn on their own. Unlike most other slots, this is a simple yet straightforward option - push the button to start the game and push it again to make it stop. Just mind your balance if you decide to do it.

The paytable displays all the symbol pays and information about the bonus features and the game rules. Access it through the menu button in the bottom left corner of the screen and then select the icon with the 'i' letter.

How to Win Wild Genie Slots

Winning the game means landing some hefty symbol combinations or hitting one or more of the bonus prizes. There are few symbols that are quite valuable and important in the game. There are two wilds in it - the magic carpet and the genie's turbaned head. The first one substitutes for all symbols except the lamp bonus symbols. The other wild appears during the free spins and substitutes for all, and not only that, it also pays a prize of 500x.

As for the standard symbols, the most valuable one is Aladdin. Appearing in five spots on the grid on a payline pays 2500x multiplied by the line bet. The next most valuable symbol pays a lot less - only 500x, but we may suppose that the variance of this symbol landing in more places on the grid is much lower, meaning, it should do so more frequently than the previous symbol.

The magic lamps are collected to trigger the free spins or the other bonuses.

Spending a magic lamp triggers a bonus. The genie appears and swishes his hand to bring about one of four bonuses: Lock & Spin, Multiplier, Click Me and Win Spin.

Lock and Spin reveals scrolls with multipliers and those that become exposed will cause the blank reels to spin again. The chances for landing a multiplier are there, and the multipliers are between 1x and 100x.

Multiplier triggers a wheel of fortune, which results in a whole sum multiplier to apply to the triggering bet, with figures to do so as high as 100x.

Click Me is a pick me game, where the players choose from five treasure chests, again, granting multipliers, but halfway (50x) compared to the previous bonuses.

Win Spin causes the reels to become filled with double symbols and that boosts the chances for a bigger win. The guaranteed minimum is a cluster of symbols of a 3x3 block.

The slots experts at StakeLogic, in cooperation with Novomatic, have delivered a fully mobile functional slot game. Wild Genie and the Three Wishes slot is here to entertain and possibly provide some amazing winnings to anyone who can load an online casino on their apple or android device.

We can concur that Wild Genie is a repetition of a familiar theme, but the major difference is not in the graphics, but in the gameplay. Whoever is into online slots with more than just one bonus feature ought to be surprised by this game. Play with a Wild Genie RTP of 96.36 which is well above the average.

To experience this game start right on this page by claiming a welcome bonus to one of the casinos.