Think big tops (obviously), clowns, animal acts and great human feats and you’re on the right track. Introducing Big Top Extravaganza, the five-reel, 20 payline slot based on all things weird and wonderful, within the confines of an old-fashioned big top circus! 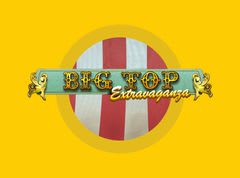 Think big tops (obviously), clowns, animal acts and great human feats and you’re on the right track. Introducing Big Top Extravaganza slot, the five-reel, 20 payline slot based on all things weird and wonderful, within the confines of an old-fashioned big top circus!

Enjoy some well-drawn, if not a little creepy, graphics when spinning on the Big Top Extravaganza slot and try to land some colourful symbols along the way to earn real money! Plus, this slot has a progressive jackpot, but we’ll cover that later!

As soon as you launch this particular slot, you’ll notice that it’s based on an old-fashioned circus; the game’s lower value playing card symbols are drawn in such a way that thoughts of Victorian circuses are instantly conjured up, whilst this slot’s other symbols include a tightrope walker, some clowns, a performing seal and a ringmaster.

It wouldn’t be a classic big top without a feat of strength too, so a strongman represents the wild symbol and a human cannonball is the scatter. Plus, this slot also includes a bonus symbol and this is represented by a sideshow sign.

Aside from the symbols themselves, the Big Top Extravaganza slot has a theme that is apparent through the design that fills the space around the reels too. The payline numbers are bright and colourful, whilst the game’s border is also typically classic.

Before you start the circus-themed reels spinning, you must decide your stake amount and a number of active paylines that you’d like to play across.

You can select your stake, or coin size, by using the ‘Stake’ button at the bottom of the reels. You can play from as little as 5p per payline or as much as £50!

So, with 20 paylines to choose from, this means your total stake for each spin can range between the minimum of 5p across just one line, all the way up to a total of £1000!

It’s worth being aware that your coin size will be multiplied by a number of paylines that you choose to play across. So, this slot game’s potential total stake is a result of the maximum £50 coin size being wagered across all 20 paylines. Ultimately, £50 multiplied by 20 paylines equates to £1000!

The Big Top Extravaganza slot is then definitely one that can cater to players with higher budgets.

When you’re playing the Big Top Extravaganza slot, landing combinations of three or more symbols on the reels will reward you with a payout! And like we said, because there are 20 paylines, there are plenty of ways to win!

The most lucrative symbol to land is the ringmaster because five of these appearing on the reels across any payline will reward you with 2000x your stake! The clowns also have the potential to pay out some nice sums too, so even if you do have a phobia of them, you might not mind them appearing on the reels!

This slot’s wild symbol, the strongman, also helps create combinations by substituting for any icon except the scatter to help form a win.

The canon symbol doesn’t just seem to be shooting out humans in this slot because when you land three or more of them, they’ll be shooting out free spins (not literally)!

Once three or more human cannonball scatter symbols land, you’ll be presented with 15 boxes, each filled with a different number of spins! You can keep clicking to earn and collect the spins until you eventually find the box which prompts you to start the Free Spins bonus round!

Big Top Extravaganza slot game’s free spins feature gets better too because sticky wilds are also added to the reels. Once one of these is landed, it’ll come with a number, letting you know how many spins that it will remain on the reels for.

And if that still wasn’t enough, you can retrigger even more free spins from within this feature my landing more scatter symbols!

Big Top Extravaganza slot’s next bonus round is the Sideshow Feature which can be launched by landing three or more of the sideshow sign bonus symbols. These symbols must land consecutively on a winning payline however, unlike the scatter symbols.

The Sideshow Feature will then give you a choice of three mini-games to play; pick from Lucky Duck, Coconuts for Cash and Strike it Rich for your chance to win various small rewards, including cash prizes!

This slot also has a Gamble Feature, an attractive prospect for the more daring players of the slots scene maybe. After each win, players can click the ‘Gamble’ button at the bottom of the reels to effectively play a game of double or quits with their last win.

If guessed correctly, you can keep going to try and double or quadruple your money by guessing the colour or suit of the next playing card that’s drawn.

Coming from Openbet, Big Top Extravaganza slot is part of the game manufacturer’s Progressive Jackpot network, meaning you can see the current total above the reels whilst having a chance to win it!

There are three jackpots available, each named Mini, Midi and Maxi to represent the size of the potential payout. These progressive jackpots can be won by landing three, four or five ringmaster symbols on a winning payline!

Depending on your budget and preferred slots gaming style, we’ll often recommend playing with as many active paylines as possible. As we mentioned before, your coin size will be multiplied by a number of paylines you play across.

So, by lowering your coin size, you can select to play across many paylines whilst keeping your overall stake at a reasonable and non-budget-breaking amount!

Also, because this slot features a progressive jackpot, playing across multiple paylines will also give you a better chance of winning these staggering sums of money. Unlike the scatter, the ringmaster symbols that trigger the jackpots must land consecutively on a winning payline, so the more that are active, the better chance you have of landing some serious cash!

Aside from the circus-related symbols and graphics, this slot features plenty of exciting bonus features, giving players the chance to win free spins and even cash prizes!

Being part of OpenNet's progressive jackpot network is also an exciting aspect of this slot! With the opportunity to win three jackpots, Big Top Extravaganza seemingly has it all and it’s definitely a slot we’d recommend playing, whatever your budget may be!