A high-paying online slot dishes out one, two, three and four symbol wins on a single payline and four reels. This is the Extreme Pay slot by Oryx Gaming, with its top payout of 1250x which on the biggest bet of £10.00 translates to £12,500. 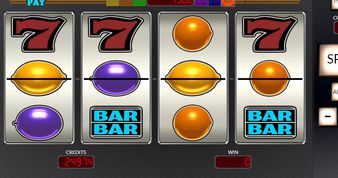 Play the Extreme Pay slots and experience a retro action that can bring wins of up to 1250x.

It doesn't get any more retro than a three row slot with a single payline. But there is a twist. Instead of three reels, as it is always the case, on the Extreme Pay slot there is an additional reel, comprising a total of four. This doesn't necessarily translate to four matching symbols on the payline for a win to trigger, because three-symbol wins are also paid.

Extreme Pay by Oryx Studios comes with a top pay prize of 1250x multiplied by the winning bet, but that is only when the win is triggered on the highest coin size. What makes this game stand apart are the various combinations, such as any three or four of the seven symbol variations, that can result in a paying outcome.

The game comes with a scatter, but it isn't in the form of a symbol but the line itself becomes it. Extreme Pay slots doesn't have a wild symbol, however, a single or a double cherry can trigger a winning outcome also.

True slots players know the value of retro and classic slots. For the record, retro slots are modern versions of old slots machines. These may be given a modern look-over by the production studio or they may be left as such, so as to pack the old style of casino gaming with a single payline, or up to five.

This is one of the examples of a classical slots machine made into a retro slot. There is very little going on on the reel set in terms of graphics design. As a matter of fact, Extreme Pay slot is so bland that it could simply blend into a wall. On the other hand there are symbol wins to be had, as well as a jackpot payout for the luckiest players out there.

If you are into this genre of slots, you shouldn't expect much as you may well know about retro slots releases that are absolutely stunning. Still, we don't suggest backing out from Extreme Pay. Do give it a try, as it may be you luckiest retro slot.

How to Play Extreme Pay Slot

Extreme Pay slots has up to ten coins on offer, and each one extrapolates the coin size that's been pre-set by the casino. At any rate, there isn't a coin size to configure, so it is just one setting and the spin button.

Autoplay mode is also available to set the reels moving on their own, however, you need to be mindful of the balance as the game doesn't offer any optional stops, such as on single win limit or a specified aggregate loss.

The paytable, which contains all of the symbol pays, can be found in the Info button in the top right corner.

How to Win Extreme Pay Slots

The paytable is chock-full of symbol combinations and the payouts they bring. We mentioned about that a single cherry pays x2 and twice it does x5. Three cherries, oranges and plums pay x10 and three lemons pay x20.

The symbol wins increase with four matching symbols on the single payline. The cherries, oranges and plums in fours pay x20 and the lemons pay x50.

When it comes to the big payouts, it is the sevens that bring the most to those who get lucky on the Extreme Pay slots.

The blue, white and red sevens in threes pay x50 on the blue scatter line or x200. Four of the same pay x1000 when you get it on coins one to eight, while the jackpot prize brings x1250 when the coins display shows nine or ten.

The game doesn’t have a free spins bonus, which is quite expected. Those symbols that have a blue lining underneath are scatters and when these occur as a paying combination, they don’t have to fall on the leftmost reel and onto the right in succession. The scatter symbol pays less but enables symbol wins that break with the game’s general left to right rule.

If anyone wants to check out the game they can do so because the Slovenian developers at Oryx have made it available to the general public.

A retro game with an awesome pay mechanism is what Extreme Pay slot is. You can play it on the minimum coins and still play for a chance to register sweet wins. We don’t know the game’s variance for certain but suspect it high, while the theoretical RTP is 95.21%

Claim a welcome offer and discover Extreme Pay slots at the online casinos on this page.