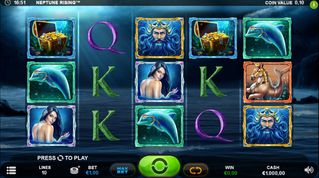 Play the amazing Neptune Rising slot for a chance to win the 9000x prize on the wild symbols or even more, with a top possible payout of 450,000 coins.

Every once in a time a slots developer will go to mythology for inspiration and often times the result is a repetition of something that has been previously seen. This isn't the case with Neptune Rising slot, made by the slots experts from Plank Gaming. What makes Neptune Rising different is the innovation in the design, making this slot game very pleasant on the looks.

The background is fully animated, and that is something which we are seeing probably for the first time in that style of execution. The splash of the waves and the irradiating rays of the sun create a swell environment against which the reels spin in all their potential. But what is an ingenious twist on things is that the god of the seas, Neptune, can emerge from under the waves and bless the reels to cause a change in the symbols towards the potential win.

Neptune Rising has ten paylines that are active at all times. Besides the dramatic entry into the game and everything that may ensue afterwards, comes the matter of landing winning combinations and the top payouts. The game has a theoretical maximum cash prize of 450,000 coins, multiplied by the line bet. There is a big win opportunity with the Wild symbol, which in an instance of five matching on the reels leads to a prize of 9000 coins on the line bet - not a half bad amount itself either.

How to Play Neptune Rising Slot

The slots experts at Plank Gaming have introduced a game with the controls ready at hand for your ease of play. The ten ways to win are always active and the bets are configured from the coin-stack with the same lettering. There is a wide range of bets that can be selected from the table, starting with the basic bet of just £0.20 and going up to the maximum bet of £50 per spin, with multiple selections in-between.

Neptune Rising slots offers the autoplay option which let the players choose a number of automatic spins to be made on their own and up 1000 turns, however, without the option of setting a win or loss limit. Then there are the paytable and the information pages, which are part of the menu, accessible from the bottom left corner of the game. There the players can discover all of the symbol pays, the game rules and information about the Neptune Rising bonus features.

How to Win Neptune Rising Slots

The beautiful picture symbols are responsible for some lucrative sums that could be won whenever the these symbols appear in three or more instances. Since they can be substituted by the wild symbol, a string of five or four matching symbols with Neptune or the sea princess or the horse with a fin tail, can all grasp a prize of 750 and 400, respectively.

One feature that is rather amazing is that the game's two most powerful symbols (safe for the wild) can deliver winnings of 5 coins multiplied by the line bet for only two symbols on a payline. In all other instances the winnings start at three symbols, with the ten and the nine cards also getting two coins for two symbols.

Other symbols in Neptune Rising slot are the Scatter, represented by a golden coin with Neptune's relief on the obverse. Landing this symbol in three or more instances leads to the free spins bonus. Meanwhile, the Wild substitutes for any other symbol, except the scatter, and it is also the game's most valuable symbol at 9000x multiplied by the winning line bet for an instance of five, and 2500x for an instance of four.

Landing three of the scatter symbols will trigger the free spins bonus. This means ten free spins will be awarded, with the Neptune Rising bonus active here as well. With any near-miss spin Neptune will rise from the sea on one or three reels, and enchant a number of symbols that will trigger a win. If there is a miss of any symbol, Nepture rises on one or more reels and turn the non-winning symbols into those that are required for the win.

Plank Gaming may not be a famous company but they will surely impress many people with their production of Neptune Rising. There is everything here to impress, and not just the winning potentials, so this is a game that should find itself on the favorites list.

To play Neptune Rising slots, start on this page by claiming the welcome bonus at one of the casinos.