Discover all of the oil in the world, but virtual, in the Rich Geyser slot. This is a Plank Gaming production with five reels, three rows and a 250,000x coin on the line bet top prize. The game has two bonus feautres: a gushing oil wild symbols, creating new wilds on the reels, and re-spins all in the same feature. The Wild substitutes for all other symbols and it itself is worth 2500x. There are 10 paylines on which it could appear. 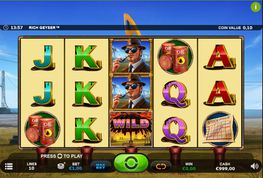 Play in the oil-rich fields of the Rich Geyser slots game by Plank Gaming. This 10 payline machine can deliver a maximum pay of 250,000x coins by the line bet.

A geezer has struck gold in the form of a geyser and thus he's become a Rich Geyser. The premise is all about that viscous, lucrative and dirty thing called oil, but no one is sending anyone to the tar sands or the oil platforms in Texas. This is a slot machine of classic five reels and three rows, as well as ten paylines, which spins for some quite interesting prizes.

The aptly titled game is set against a backdrop of oil rigs and blue skies. Underneath the five reels are five pipes, each one spewing out that wondrously expensive thing that is pumped in the gazillion tons. With a maximum payout prize of 250000x coins on the winning line bet, the slots experts at Plank Gaming have given to the players the Rich Geyser slot game to potentially call it a favorite.

The players will be met by a set of symbols that are to the point. An old stock price index on a chart marks a red and blue line, both in the upward direction. The second most lucrative symbol is Mr. Rich Geyser himself and the champion of this slot game is the Wild, which substitutes for all symbols and pays 2500x on the line bet. There are several neat boosters and modifiers that can occur during the base game and the free spins that make this slot one to look out for. And last, but certainly not least, is the game's Return to Player theoretical outcome, which has been set at 97.36%.

How to Play Rich Geyser Slot

The game is set up through the controls below the reel-set. Ten paylines is a constant in this game and whatever amount is used as a bet, the lines will always stay the same in number. Their exact arrangement can be seen from the paytable which is a great source of information about some gameplay details on the bonuses, the reel modifiers and symbol pays. It can be accessed from the menu button in the bottom left corner of the page, and then by selecting the question mark button or the 'i'.

Besides this, there is the autoplay feature, whose button is located to the right of the green Spin. The autoplay option enables the players to choose a number of automatic spins that goes up to 1000. Selecting this option doesn't come with setting a loss or win limit, so the players have to watch their balance while using the autoplay.

And to set up the wager per spin, there is a symbol of stacked coins to the left of the BET label, which designates the size of the current bet. The bet itself is selected from a chart that has amounts starting with £0.20 per spin and going up to £100.00, with many sums that are in-between, giving the players a good range to select from. The smallest coin size per line is £0.02 on the least expensive wager and £10.00 on the most expensive wager.

How to Win Rich Geyser Slots

The game offers two super nice features: Stacked Symbols possible on any of the reels and the Gushing Wilds re-spin feature which comes with moving wilds. It is notable that Rich Geyser slot has a Wild that substitutes for any symbol and it represents the bonus feature trigger with just two of its own landing on the reels.

The Gushing Wilds bonus causes the pipes underneath the two Wild symbols to spew oil which will turn all symbols beneath to the highest point it reaches, wild symbols. The more wilds on the reels, the better the chances become for a stronger winning combination. What is more, the Wild is the game's most lucrative symbol, paying an amazing 2500x on the line bet for five matching symbols. The feature can become triggered again with the appearance of additional wild symbols.

Other symbols’ values can’t compare to the wild, but are worth noting because these can sustain the players into the game until a bonus feature or a big win is potentially won.

The barrels of oil pay 400x for five and the stock price chart pays 200x on the line bet for the same number of symbols on the line. The rest of the symbols are the royal cards with oil dripping all over them. The most valuable of this set is the ace, paying 125x on the line bet, followed by the king with 100x.

Those players who fancy themselves oil kings could enter the fantasy world of Rich Geyser slot, where the winnings are as real as they come.

Claim a welcome bonus from this page to explore the game at one of the casinos.