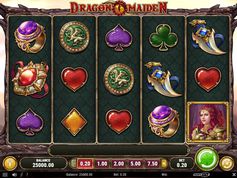 Play with the Dragon Maiden on the slot game that gives you a chance to win up to 5000x prize to your winning wager. Besides the initial winways of 243, the reel set expands to 7776.

The Dragon Maiden slot is a powerful five reel game developed by a team of truly gifted designers at Play N Go, featuring dragons as its main theme. While this is not an utterly uncommon theme, we can concur that it hasn't been overplayed. There've been enough dragon-themed slots to set the standards in how a really good game should look and play. By all means, the gameplay in Dragon Maiden slot is true to the thrill of taming dragons. You'll be on the edge as the five reels spin across the Multiway for paylines of 7776 ways. Besides this feature, there are bonus features, such as the free spins and the expanding Dragon Maiden wild symbol.

How To Play Dragon Maiden Slot

Setting up for the gameplay takes but few clicks which will have you spin the reels of this slot in no time. As you may have already guessed, there won't be any controls for the paylines, as this Multiway slot has all the lines you can imagine, active at all times. So what remains for the setting of the game controls is the size of the nbet and this is as straightforward as possible. Simply, use the plus and minus buttons to scroll to the left and right and select the wager that you wish to play per spin. The smallest bet that you can play on the Dragon Maiden slot is £0.20 and the highest bet £100, however, there are many options for the bet that are in-between these numbers on the margins.

One of the best things about playing this game is the liquid gameplay that never leaves you bored, waiting for the reels to shake out something nice. Part of the design is the expanding Wild symbol which expands the reel-set by adding additional blocks on it. The more wild symbols appear on the reels, the more the surface will expand and decrease in size so that everything fits neatly in it.

Part of the design is also how the reel-set has been built. It features a really nice frame made of obsidian, and touched up with streaks of molten lava. The reel set breathes dragons in its essence, and the background provides a beautiful mountainous landscape with a waterfall and crimson, sunburst clouds.

As for the symbols, you will see lots of the cards suits but rendered in crystals that have been gilded a frame. These are the low-valued symbols, while those of a higher value are a ring, a dragon battle shield, the Dragon Maiden slot wild, a red ring and a blue dagger. The fierce red dragon symbol is the game's scatter symbol that triggers the free spins and does a retrigger when another set lands on the reels.

Throughout the game, every winning combination awakens the symbols so that they offer a pretty glimmer, whilst the red dragon flies above the grid and breathes a waft of fire with which the paylines expand into the top possible multiway number of 7776.

How To Win Dragon Maiden Slot

You can win some big cash prizes on the reels, but this is all a matter of luck and all falls into the hands of the Random Number Generator. This is in essence the mathematical program that is present in every slot game, which ensures that all outcomes, whether losing or winning, are provided as a random occurrence from the millions of number sequences.

That being said, you can win high prizes, if you are lucky enough to have high-valued symbols on the reels in a number of instances that ensures the top amounts.

As for the top payout that can occur in one action - meaning, one Dragon Maiden free play bonus game or base game spin, it is a whopping 5000x multiplied by the winning wager. Nobody says that this can't occur more than once during you gameplay, but what are the odds of that? Only you can find out.

To play this and other dragon-themed slots, check out the welcome bonuses that you can claim right from this page.