The game comes with eight vertical columns and six rows that delineate a different number of symbols under the respective column. The main point is, it is shaped like a volcano and can generate a massive combustion of symbols for winnings of up to 10,000x multiplied by the bet. Gold Volcano has a theoretical return to player of 96.20%, and the volatility is between medium and high. 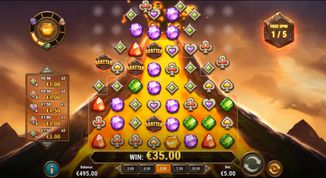 Play'n go have broken new grounds with their latest volcano-shaped slot. The aptly-titled Gold Volcano is a grid-based game that makes cluster payouts, however, the grid isn't four right angles as it makes few cascades that form the lava dome. As anyone can guess by now, there is lava involved and it's the purveyor of cash winnings whenever it reaches the point of flowing out of the volcano.

Gold Volcano slot comes with two modes of activity and several extra features, which include three reel modifiers, multipliers, symbol conversion and an expanding grid. All of this makes for an exciting adventure that makes payouts according to the cascading wins system, which makes winning outcomes disappear and be replaced by new symbols.

The graphic design is quite appealing as it can't be expected any other way from the seasoned slots experts at Play'n GO. Even for a grid-based game the graphics offer some highlights in the way the symbols have been drawn and how they are behaving in the event of a winning outcome.

Gold Volcano slots has a towering volcano that provides the background to the grid. One of the more amusing effects on the reels is when the volcano wakes up and starts rumbling. The lava can flow to the very top of the cupola and even overflow, or cause the symbols to shift places.

Overall, the game has a good set of visual effects and it comes with a dramatic musical theme that fits the exciting gameplay.

How to Play Gold Volcano Slot

The controls and buttons are placed in places where we are used to finding them across most Play'n GO slots. There are few additional elements on the screen because the grid-based game offers a broader scope that is part of the gameplay.

On the left side of the reels is a box that keeps count of all of the cluster wins that are occurring during the ongoing turn. Above that element and in the upper left corner is a wheel with four gemstones, which is the meter that keeps all the gold bars, which are the scatter symbol in the Gold Volcano slot.

To start this volcanic reel adventure press the big round spin button in the bottom right corner. To the right of it is the smaller of the spin buttons, but causes the grid to churn out new drops automatically. Open up the menu and select the number of automatic spins.

Optional settings include placing controls on the balance spend, such as to stop autoplay when the bonus feature has been triggered, a win limit, loss limit and so on.

Last but not least, selecting the bet is the first thing to do before making any moves on Gold Volcano. The bottom of the grid has a sliding scale with all of the bets. The smallest bet is 10p per spin and the maximum bet is £100.00.

How to Win Gold Volcano Slots

The volcano is sometimes silent and sometimes it jumps into action. The grid-based payouts involve cascading wins, which result in winning outcomes removed from the grid and replaced by new symbols. Cascading wins don't result in win multipliers but they do make wins with at least four symbols of the same kind.

Gold Volcano slot has a range of payouts that begin quite small, but that is only because of the cascading wins system. The cards' suits are the low-paying symbol category and the gems are the highs. The green gem pays 35x for more a cluster of 30 or more symbols.

These outcomes are rare, so the game's instant jackpot prize of 1000x multiplied by the winning bet is triggered when more than 30 gold gems occupy the better part of the grid.

As we said, the game has two modes, pressure and dormant with the latter appearing on any spin that doesn't ring up a cash prize. That random triggers one of three features that can place between one and five wilds across the grid; add a row of a random symbol; and causes the volcano to rumble and change the positions on all symbols.

Winning spins can randomly trigger the pressure feature. This is where wild symbols are added to the grid in random square grids that were part of the winning outcome. Furthermore, the wilds may carry a multiplier that makes the potential payouts double.

The free spins bonus is triggered following six wins in a row during the base game. The players are give five spins on a grid of eight horizontal and eight vertical rows.

There is a scatter, but as you can see, it does not trigger the free spins bonus. These symbols are collected in the meter and for every three, a symbol kind is transformed into the gold symbol, which is the most valuable one in the game.

We have two excellent games coming from the studios of two excellent production companies - Play'n GO and Playtech. Both games are engaging but let's make a comparison of the specifications so that no matter how different the gameplay is, the player can choose what game to play according to the RTP, win potential, volatility and the such.

Compared to that of Gold Volcano, Wild Lava has a theoretical RTP of 96.47% which is just slightly better. In terms of volatility, this game is between medium and high, however, the maker of Wild Hava has not released the official variance level yet. And last but not least, Wild Lava slot has no information about the max win potential while Gold Volcano states a figure of 10,000x your bet.

In the end of ends, the question is, will players go for the multiplicity of wilds in that game or for the game that has both random wilds and an expanding grid... or, eventually try a bit of both.

The game is available as a free play demo slot at online casinos that host games in practice play mode, enabling players to try the game out for free.

Without much pomp, Play’n GO have released the game that is going to make it to the list of best grid-based slots in 2020. It is indeed one of the better slots of that kind and has all of the features to help it land there.

Discover the Gold Volcano slots by claiming a welcome offer right from this page and play at top-rated online casinos.