Golden Ticket gives you the chance to enter the circus tent and play the bonus round where you have one of the greatest opportunities to get lucrative wins.

If you want to see the unique and innovative approach to video slots that Play‘N Go takes, the Golden Ticket slots is the perfect example. When compared to releases from other software providers, Play’N Go’s releases completely different. This is true not just for the theme, a circus show from the 1800’s, but also its setup and gameplay. Its reel setup is also different using a 5x5 grid with 25 symbols instead of the standard spinning reels.

Golden Ticket slot can be easily listed among Play’N Go’s best composition games. With its 5x5 reel set placed against a background image featuring the entrance to a circus adorned with flashing lights all around, the game invites you to step inside and see the show. The box on the right of the reels displays various animated characters, circus acts, who welcome you to the game and offer you to try your luck. The graphics are well designed and together with the realistic audience heard throughout the entire gameplay, just add to the quality of the game.

The symbols on the reels also follow the game’s circus theme and are designed to represent various circus performers and their corresponding items. The low-value symbols start with a pair of juggling clubs, followed by a kettlebell with 500 written on it, and another symbol with a kettlebell, but accompanied by a dumbbell. They are followed by a lion tamer’s top hat, a lion tamer’s top hat with a whip, a sad clown, and a strongman.

The highest symbol payouts are awarded by the master of the ceremony himself, the lion tamer. Each of these symbols pays for combinations of three, four, and five matching symbols.

The game’s Wild symbol is the GOLDEN TICKET symbol that substitutes for all other symbols on the reels and helps you achieve more wins. It also pays out for combinations of three, four and five matching symbols.

How to Play Golden Ticket

Golden Ticket slot is a very straightforward and easy-to-playgamesince all buttons are placed at the bottom of the screen.

Since there are no paylines, all you need to adjust before setting off the reel set is your total bet for the spin. The five available coin-sizes include 0.20, 1.00, 2.00, 10.00, and 40.00. You can select your coin-size in two ways. One way is to click directly on the bet that you want to wager on, and the other is to use the – and + arrows located on the sides of the BET field.

Once you have selected your bet for the spin, press the “START” button in the bottom right corner of the screen to set off the reels.

If you are not too keen on pressing START after each spin, you can always go for the autoplay feature the game offers. By clicking the “AUTO PLAY” button in the bottom left corner of the screen, the game takes you to a new screen where you can select from a pre-set number of rounds to be played automatically.

Select the number of rounds, adjust the rest of the available settings and press “OK”. The reel set starts turning right away, so make sure to select your bet before making the selection. You can always stop the AUTOPLAY mode by pressing the “STOP” button in the bottom left corner of the screen.

How to win Golden Ticket

As mentioned in the text above, payouts in Golden Ticket slot are awarded by landing three or more matching symbols in a row either horizontally or vertically. The same symbol can take part in different winning combinations which can get you nice winnings.

Once used, all winning symbol combinations are removed with the remaining symbols dropping down on the reels. This often results in new winning combinations. For each drop of the symbols, the win multiplier is increased. If you are lucky enough to clear all symbols on the grid, you will be awarded 2000.00 coins. 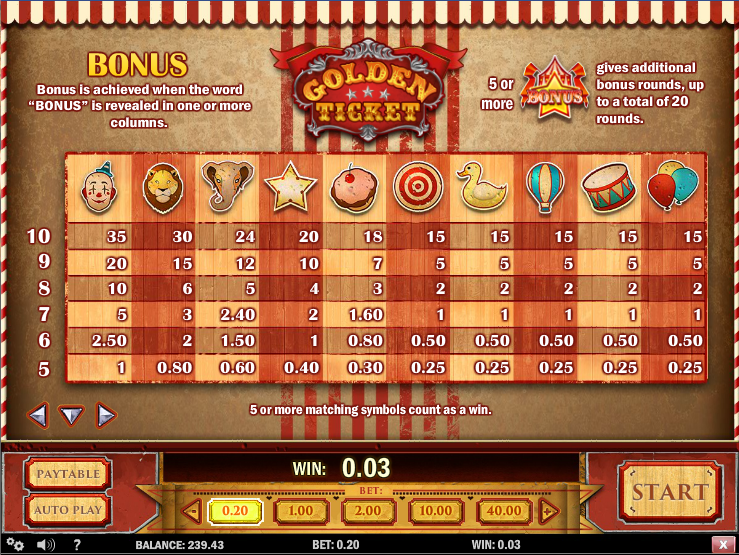 Although there is no Wild symbol in this game, the Golden Ticket symbol acts as one and helps you land horizontal or vertical win lines of two or more symbols. It can even help you achieve combinations of symbols which are not quite identical, such as the variations of the dumbbell and top hats symbols.

When you land a Golden Ticket, it replaces one of the symbols while the rest of the symbols disappear, and the remaining symbols drop down. It can also contribute to eventual new wins during the drop-down process. When there are no more wins formed, the reels will spin anew.

During every spin, the word “BONUS” appears on two random columns behind the reels. If you are lucky enough to clear one of the columns during the drop-down process, you will trigger the game’s bonus feature. When triggered, a shooting gallery opens, and you are awarded 10 Bonusrounds.

During these rounds, landing 5 or more matching symbols gets you a win. If you land 5 or more BONUS symbols, you will receive additional bonus rounds to a total of 20 rounds. The symbols in this bonus game are different than the main game and include such symbols as three balloons, drum, hot air balloon, duck, target, cupcake, star, elephant, lion, and clown. The symbols are listed in an ascending order according to their value.

Golden Ticket slots from Play’N Go definitely stands out from the rest of slots on the market in terms of simplicity and innovation. Without the standard bet lines in the game, you are only left with selecting the amount of each spin. The well thought-through Golden Ticket feature, as well as the Bonus rounds, are easy to achieve. With an RTP of 96.73%, the wins in this game are small, but they are regularly awarded, so it is definitely worth a try.