Players are welcome to explore the game wirth bets that can be as low as 10p per spin. The layout consists of three rows and five reels that spin across 20 fixed paylines. The smallest winning outcomes can form with three symbols of the same kind, but the game also has a wild that substitutes for any. The theoretical return to player on Jolly Roger 2 is 94.20% and the variance is medium. 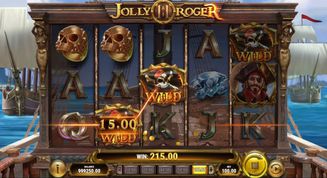 Jolly Roger was a famous slot released by Play'n GO many years ago, in 2012. The game was pretty good and the name rings a bell, so why not try and repeat its success by creating a Jolly Roger 2 slot that comes with a new set of features, graphics that are a lot better and gameplay that is more engaging overall.

Jolly Roger 2 takes the players on the deck of a pirate ship which has been lined with cannons and is ready to go on a buccaneering adventure on the seas. To help it reach various destinations, the system can dish out multiplier and regular wilds and the exciting bonus quest feature, which can lead to one of several bonus features.

Play'n GO are celebrated slots experts who have made a name for themselves by making fun-loving slots. This game is a perfect example for that because in addition to the gameplay features there are the moving parts and animated features. Each spin on the reels can invite animated bits and payouts that are marked in a celebratory manner.

Jolly Roger 2 slots has two symbol categories - low-paying and high-paying. The first category is represented by royal cards and the ten card, which have been made of wooden boards that were nailed together with big, rusty nails. The latter category consists of some pirate decor, such as the skull ring and the skull cross, and objects of praise such as diamonds and a chest filled with gems.

How to Play Jolly Roger 2 Slot

Setting up the gameplay starts with selecting a bet per spin from one of the available amounts that can be seen in the bottom of the screen. The range of bets begins with 10p per spin and has a maximum of £100.00. Using the minus and plus buttons enables you to scroll through the full range of bets.

Once the bet has been defined, the player can press the green orb button in the bottom-right corner of the screen in order to set the reels to spin. To its right is a smaller, yellow button which opens up the autoplay menu. This mode enables players to let the Jolly Roger 2 slot do make the reels spin on its own, by selecting the number of automatic spins from the presets.

Those players who want to check out the paytable and the full schedule of payouts can press the 'i' button for the paytable. Additional information is provided about each of the extra features, but there is really no need to peruse this information as Jolly Roger 2 does everything automatically.

Last but not least, there are few buttons in the bottom left corner. The menu button is the three-line symbol, the speaker button stops the sound or brings it back on, the thunder causes the reels to spin faster and the question mark opens up detailed game information.

How to Win Jolly Roger 2 Slots

Winning outcomes are formed with three or more symbols of the same kind that must land on one or more of the game's paylines. There is also a wild symbol that can substitute any of the payline symbols. The wild is also a high-paying symbols that can trigger wins of up to 10x multiplied by the winning bet for five of a kind.

Jolly Roger 2 slot has smaller payouts compared to games that have only one bonus feature. In this game, it is the multipliers that can provide the balancing act between the smaller payout amounts as per the paytable and the big-win possibilities such as the maximum payout of 5000x that can result from a single spin.

There are two other special features besides the wild. The compass is an overlay symbol for the wild that can add multipliers of up to 10x the winning outcome.

The scatter is the bonus symbol that can land on reels one, three and five and trigger the Treasure Hunt and the Map symbol appears only during that feature.

When the Bonus Quest is triggered, the player gets to click on the scrolls and reveal the posters. Matching three posters triggers the corresponding feature, which can be: Instant Prize, Bottle of Rum Free Spin, Battle Free Spins and Treasure Hunt.

Players can try the game with all of its features in a free play demo mode, which is enough to get a feel for the gaming experience, minus the potential cash payouts.

The game is a huge improvement from the original version and players will know it right away. Instead of High variance which is typical for games that have multiple bonus features, Play’n GO has decided to go with medium and that makes winnings across the board possible.

Discover the  Jolly Roger 2 slots by claiming a welcome offer right from this page and play at top rated online casinos.