The Nyjah Huston - Skate for Gold slot comes with three rows and five reels. These spina cross 10 always active paylines on which a reel adventure can unfold with as little as 10p per spin. The players will find a theoretical Return to Player of 96.20%, medium variance - which is surprising for Play'n GO, and maximum exposure of 5000x. 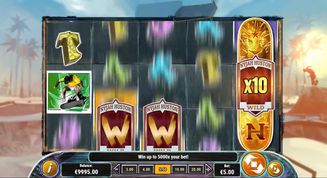 Nyjah Huston has become a skating legend in recent years and the now legendary slots makers at Play'n GO are keen on exploring the effects of making slots based on pop culture. The sport of skateboarding, as well as the industry of rock and metal music, are fitting platforms for new games, such as those like Testament slot and Annihilator.

The players are going to find dynamic gameplay that is just in line with the energetic sport of skateboarding. This accolade is orchestrated with the help of the wild symbol and the fact it can turn up multipliers on the winning outcomes. The game can trigger a free spins feature, and then some more.

In terms of graphic design the game lives and breathes skateboarding. It may be so that most slots players either don't care about skateboarding or have never batted an eye at a kid doing a caballerial ollie, which is fascinating thing to witness. Nevertheless, skateboarding is a legitimate sport and form of entertainment for millions of viewers around the world, so why not play it as an online slot?

Nyjah Huston - Skate for Gold slots is constantly on the move. Responsible for this is Nyjah who appears on the reel-set in a few skateboarding poses that represent the high-paying symbol category. The low pays consist of graffiti-shaped letters  that spell ‘SKATE’, and there is a wild and a bonus symbol. Wins are marked appropriately for the genre and the game comes with a number of cut scenes that have even more skateboarding tricks.

How to Play Nyjah Huston - Skate for Gold Slot

The slots developers and designers at Play'n GO have opted for the familiar layout for the controls in this game, placing all of it at the bottom of the screen.

The button that sends the reels spinning can be found in the bottom right corner of the screen. To its right is a smaller round button that lets you set up the autoplay mode.

This is one way to play the Nyjah Huston Skate for Gold slot. Choosing from the automatic spins presets enables players to kick back and let the game spin its own reels. Optional settings in this regard include stops that trigger with specific events, which enable control over the balance spend.

To select a wager, use the minus and plus buttons at the bottom of the screen to scroll through the bets. The smallest wager is 10p per spin and the maximum is £100.00 per spin. Whatever bet is selected for the game, it will play across all 10 paylines.

Viewing the symbol payout and bonus feature details is possible by selecting the 'i' button at the bottom left area of the screen. The speaker lets you turn on and off the sound, and the thunder button toggled on means the reels will spin faster.

How to Win Nyjah Huston - Skate for Gold Slots

Winning at the game requires getting winning outcomes with at least three matching symbols. A wild symbol is there to help those potential outcomes. The wild comes as one square grid on the reel, but it can also appear expanded across the entire reel.

In terms of payouts, the most valuable symbol on the Nyjah Huston - Skate for Gold slot is a tempera rendition of Mr. Huston's face, which captures 25x on the winning bet for an outcome of five symbols across a payline.

The game packs few features that can blast a skateboard up in the air. First off, there is a free spins bonus that triggers with the SKATE symbols but when they appear in their gold-plated version. In the event, players get 12 spins where Nyjah pulling tricks across all five reels results in the respin game as well as two free spins added to the list.

The respin bonus is called Wildboard Respin and is triggered when any of the trick symbols match the one that is showing on the meter. In the event, the game sets two wild symbols on random locations, plus an expanded wild symbol. The last can become a multiplying wild, which is a random event. When it does, the players can reap the benefits of a win with a 2x, 3x, 5x, or 10x multiplier.

The game has been made available in practice play mode at online casinos that host them. This is a way for players to try the game as a free play demo slot and check out its features.

We have an adrenaline-inducing theme for a slot game that does everything right to produce a thrilling ride. The win max is a great amount and the medium variance makes the game welcoming for anyone who wants to try their chances on a slot game that doesn’t require a huge number of spins to see a win outcome.

Discover the Nyjah Huston - Skate for Gold slots by claiming a welcome offer right from this page and play at top rated online casinos.