The game comes with a layout of three rows, five reels and 10 paylines. Not unexpectedly, winning outcomes are made with three or more matching symbols across any one of those paylines, but multiple wins are possible too, from the same spin. the theoretical return to player is 96.24% and the variance is between medium and high. Sounds like a nice set of circumstances for some rock-metal. 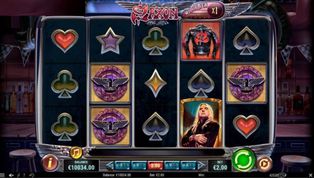 We have heard about the Saxons, but Saxon? Not so much. Rock and metal gurus around say it is the name of a metal band from England, and they are right, attests the internet. So what prompted Play'n GO to put the band on a reel set? Well, it's part of their band-themed slots, just like Testament, Twisted Sister slot and a number of other titles, that is, bands.

Players who aren't familiar with the band may find it to be just another obscure metal band, but in fact, it is one of the earliest heavy metal outfits in the UK. Naturally, Saxon slot is the first slot that bears their name with dignity, as there are few features that can contribute to improved payouts.

In terms of graphic design, the game comes with band iconography and heavy metal vibes. There is enough fire on the reel set and around the symbols, as there are also the band's jacket with the logo on it, their emblem, the frontman whose name is Biff, and other symbols. Low-pays are made with the cards' suits.

Saxon slots has animation and moving parts. Play'n GO didn't leave it just like that, regardless whether the band is known outside the UK or not. Naturally, the symbols that are most heavily doused in fire are the bonus, scatter and wild. It's worth pointing out that players are aren't familiar with Saxon's music can get an earful thanks to the few tracks that are part of the jukebox.

How to Play Saxon Slot

Playing the game can start with either pressing the Spin button or by first selecting the bet amount. It depends whether you like the default bet that's been set by the online casino. If it is an amount that you wouldn't care to play on your first few bets, it is possible to change it in few clicks by selecting the wager from the sliding scale below the reels.

Once you've selected your wager, you can press the green Spin button for each time you want to make a go on the reels or you can press the smaller of the round buttons on the right-hand side and work the autoplay settings. The menu lets the player choose the number of automatic spins and add conditional stops that can prevent your balance from going below or above a certain limit.

To choose any of the available songs by the band on the Saxon slot, press the do note, which is an orange button on the left side of the reels. It sure beats playing to dead silence. Players can also check out the symbol payouts by selecting the red 'i' button.

How to Win Saxon Slots

Winning at the game requires a winning outcome to contain at least three matching symbols on a payline. The wild symbol is represented by a sword, the band's logo and a pair of wings and gauntlets. It substitutes for all regular symbols and can land on the reel set expanded during the bonus feature.

In terms of symbol value, Saxon slot has few that can pay decent amounts. The band's frontman pays a prize of 30 for five of a kind, while the wild pays 50x for a filled payline.

One of the advantages of this slot is that the high-paying symbols can appear fully stacked both in the base game and in the free spins bonus. Were it not for this detail, the game would have tanked despite the alrightish heavy metal tunes. Also the free spins bonus is always handy to increase the odds for a bigger payout.

The bonus is triggered when Biff's symbol and the chopper land on the reel set. In the event, the player can get between five and 15 free spins. These can retrigger infinitely for every pair of Biff and chopper symbols.

What is more, both the base game and the bonus feature can add the benefit of multipliers. This is possible with wins that involve a stacked reel, which adds 1x. Another reel adds 2x and so on.

The game is available as a free play demo slot. It is possible to play it as such when you find Saxon at an online casino and play it in practice play mode, with free credits.

Not at all a poor arrangement of payouts and features. The action may be a big cranky but it does play like a decent online slot. Players can win more than 5000x multiplied by the winning bet and the variance is not to the highest level.

Claim a welcome offer from this page and discover Saxon slots at top rated online casinos.