Play'n GO couldn't wait to get their hands on the proprietary content - Twisted Sister's list of hardest rocking tracks, to include on the grid-based Twisted Sister slot. The result is a 6x6 grid dressed in blue and white, featuring the band's members as the star symbols that make the high-paying cluster wins that can deliver a maximum payout of 4500x. 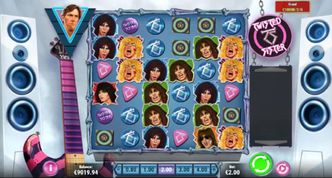 Twisted Sister were one of those heavy metal bands that ranking at the top of the cringe factor today, not because of the music, but because of its purveyors. Dressed in a way that overdoes some of reality TV personalities' most flamboyant attires, the band stood out from the rest, as did their teenage mutiny-inspired music.

As is it the case with slots of this kind, win outcomes result in successive symbol drops to replace the winners. A succession of wins could go on until indefinitely, as long there is a winning outcome following the drop.

In addition to the base game, Twisted Sister slot comes with several extra features that are triggered when each rocking chord is filled on the purple guitar on the left. The bland looks of the game are compensated for by the reel modifiers and bonus features, giving this game more than what it has at face value.

The graphic design around cluster-wins slots doesn't allow much room for the designers to perform wonders, so anyone with high expectations about hair metal pep coming to the screen should be toned down. Twisted Sister slots does create a lively reel adventure, however, which is much owed to the soundtrack consisting of the band's best songs.

Win outcomes are sprayed with glitter as they leave no trace behind them, and new symbols drop from above in a shudder that adds a cool visual effect to the table. The speakers on both sides of the grid vibrate and the guitar lights up as the meter on it received additional charge for the extra features.

How to Play Twisted Sister Slot

If you've got your leopard trousers, hair extensions, knee-high stockings to put on your arms, and similar such accoutrements, then head out to meet Twsited Sister groupies at a park. All that is needed to play the online slot are at least 10p per spin, an amount which can be selected from the slider below the reel-set.

The maximum bet on the Twisted Sister slot is £100.00 per spin, as well as multiple other amounts between the minimum and the maximum. The game can be played in autoplay mode, which can be activated from the pink play button in the bottom right corner of the screen.

Play'n GO's slots experts have included additional options for the autoplay game; in addition to the automatic spins presets, players can choose to place conditional stops, such as that stop this mode when the bonus feature triggers, or when a single win amount is reached, and so on

The 'i' button opens up the paytable that has information about the symbol payouts, details about the bonus features, and few more gameplay-related information.

How to Win Twisted Sister Slots

The grid of six horizontal and six vertical rows can produce win outcomes of five-symbol clusters, or more. The optimal payouts number 25 or more of the same symbol and there is a wild symbol on the paytable that can substitute for any other symbol.

The wild is also the scatter, which is the father and teacher figure that appears in the band's videos.

As it is the case with most good grid slots, there can be more than one cluster on the screen of Twisted Sister slot, as well as wins in succession.

Most valuable symbol is the infamous lead singer, but in order to feel the heft of that symbol you would need ten or more.

The extra features is where the game can make the most rock and roll on the reel-set.

The guitar is the meter which lets you know how much longer until the next extra feature comes into play.

The meter fills when there are cluster wins consisting of the band's members.

Another meter is charged by the Angry Dad/Teacher symbol, which is the wild/scatter. Every time this symbol forms a win, the meter adds one charge to it.

We're Not Gonna Take It is the closest thing to a free spins bonus, where the Dad symbol needs to be knocked out of the screen with the help of the band's logo symbol, which comes two by two squares on the grid.

Here is the bottom line about this game. There are plenty of grid-based slots available and many of these come with more than just one extra feature. So where does Twister Sister come into play? The game has a medium to high volatility and a potential payout of 4500x, which means it is likely that players will see any of the reel modifiers occurring without long draughts in-between.

Discover the Twisted Sister slots by claiming a welcome offer right from this page and play at top rated online casinos.