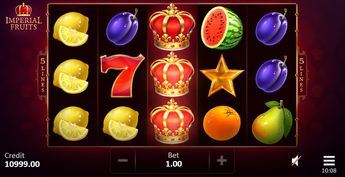 Play the Imperial Fruits: 5 Lines slot for a chance to win  up to 40,000 coins on the line bet. The game offers an expanding wild symbol and a lucrative scatter.

When fruits and stars and the lucky sevens are just not enough, then bring in the crowns. This is the summary of the symbols that make up the retro-ish Imperial Fruits: 5 Lines slot, made by the slots experts at Playson. The game teeters on the border between a retro and just a plain old fruity pokie, but certainly, it being a contemporary online slot, there is certainly more to it. Imperial Fruits has five reels, three rows and five paylines that are always active. This invites standard reel action, yet with the perk of the Wild symbol that not only substitutes any other symbol, but it also expands on the reels where it would land.

The Imperial Fruits: 5 Lines slot is able to set the reels on fire, and we mean that in the figurative-literal sense: whatever combination occurs with the expanding royal crown wild symbol is set alight, and it just looks mighty cool when that happens. Other than that, the retro part of the game translates into fruit-only symbols and those two classical remnants, such as the stars and the lucky sevens.

The game lacks a free spins bonus feature but doesn’t lack any scatter symbols, because there are two of these in the shape of a golden and silver star. The absence of free spins is alright, because a decent slot game can provide a thrilling adventure on the slots without a bonus feature. In the end of all ends, everything may be seen through the prism of the potential for wins, and the Imperial Fruits slot has some nice amounts behind the symbol combinations.

Setting up for the gameplay is a piece of fruit-cake (pun intended), because the only steps that need be made towards priming the spin button is selecting a bet from below the reel-set. This is done by working the minus and the plus buttons. Since all five paylines are fixed, there aren't any settings for that part, so we just have to pick a solid sum from those available. And speaking of availability, the Imperial Fruits: 5 Lines slots has a wide range of bets that start with just £0.10 per spin and covers many small and medium increments for the bet per spin before the final sum of £100 is reached.

Once the player has set the bet, the next step is tapping or clicking the Spin button, which is placed on the right site of the reels. There are few more settings that are optional to the player, that could be used in the gameplay. The Autoplay option is tucked inside the menu board. There the players can select the A button a set a number of automatic turns with the optional loss or win limit.

The game's paytable is the place where the players can get information about the symbol pays, which, with the dynamic paytable, will reflect the amounts according to the specified bet. Therefore, the highest paying symbol on the highest bet will reflect the sum of 40,000 for a combination of five.

The game's top payout is possibly well over 40,000, which is the amount given for the lucky seven symbol landing in five instances on a payline. The jackpot prize is more because this combination could be one of the few that may appear on the reel-set, which with the Wild symbol could result in a grid full of wins.

The scatter symbols are also valuable, with the gold star more so than the diamond scatter. Landing five of these results in a 10,000 coin win, but the wins are paid independently of the paylines. The diamond scatter pays 2000 coins for three, and the paytable seems to offer just that amount, so it could be said that this symbol doesn't occur more than three times on the reels at once.

The design features lots of fruits, and made in a decent manner. The designers at Playson did a nice job with a retro slot, which could have been a lackluster thing, but it serves the purpose of throwing back the vibe of classical Las Vegas slots that used to dominate the casino floor. Now this game is available on mobile as well as tablet and personal computer.

To play Imperial Fruits: 5 Lines slots, you can explore the game at one of the casinos on this page. Claim a welcome bonus to get started with free spins and bonus cash.